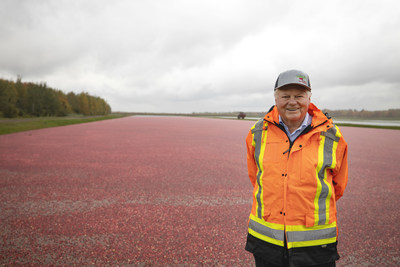 MONTREAL, Oct. 14, 2020 /CNW Telbec/ – As a man whose career as a successful agri-food entrepreneur has spanned sectors as diverse as cattle breeding, apple growing, maple syrup production and French vineyards, and who almost single-handedly built Quebec’s cranberry industry into one of the largest and most highly regarded in the world, Marc Bieler, DipAgr’58, BA’64, has always had a profound attachment to the land and a deep respect for the natural environment.

Now, he aims to help advance environmental research and scholarship for the entire planet through a landmark $15-million gift to McGill University to build interdisciplinary teaching, research and experiential learning capacity at the McGill School of Environment.

The gift is comprised of an initial cash investment, as well as future commitments from him and his estate for the next 25 years, to ensure a steady stream of resources for the School into the future.

In recognition of this transformative gift, McGill has also announced that the school has been renamed the Bieler School of Environment.

“I would like to thank Marc and Marie Bieler for this exceptional gift and for their continued support of McGill,” said Suzanne Fortier, Principal of McGill University. “Environmental sustainability is one of the great challenges of our time, and McGill’s students, researchers and administrators are committed to playing a leading role in addressing this challenge from a variety of approaches. With this transformative gift, the Bieler School of Environment will be well positioned to translate new knowledge into solutions that will have a real and lasting impact on our world for generations to come.”

The gift is the largest ever from a graduate of McGill’sMacdonald Campus and will provide immediate and long-term impact by supporting initiatives and projects built around the following three pillars:

A joint initiative between the Faculties of Agricultural and Environmental Sciences, Arts, Engineering, Law, and Science, the Bieler School of Environment is comprised of 18 jointly-appointed faculty members and 53 associate members who are based in these and other faculties. Their diverse academic interests allow the School to take a fully integrated approach to the study of complex and interrelated environmental issues. Through interdisciplinary dialogue, discussion and debate, students come to recognize the multiple perspectives underlying the threats to our planet.

“As someone whose career connects him to the land, Mr. Bieler understands that we must find solutions to the environmental perils we face, and he is confident that McGill has the expertise to do that,” said Frédéric Fabry, Director of the Bieler School of Environment. “Thanks to this major investment, we will be able to scale up our teaching, research and ultimately our impact at both a local and global level.”

The Minister of the Environment and the Fight against Climate Change and Minister Responsible for the Laval Region, Benoit Charette, stressed the importance of research in building Québec’s new green economy. “Research, especially when conducted from an interdisciplinary perspective that is open to the world, is the source of numerous viable solutions for protecting the environment and fighting climate change. On behalf of the Government of Québec, I want to congratulate Marc Bieler on his accomplishments and strong commitment to research at McGill University. As a result of his vision, the Bieler School of Environment will contribute profoundly to a greener, more prosperous and prouder Québec!”

Federal Minister of the Environment and Climate Change Jonathan Wilkinson said, “Canadian researchers tackling the difficult and complex questions around our changing climate play a crucial role in informing our actions and charting the path towards a cleaner future. Congratulations to McGill alumnus Marc Bieler and to McGill University for this significant donation that will help drive research, foster innovation, and empower scientists to leave an important research legacy for future generations.”

A two-time McGill graduate, Bieler has been an annual donor to the University since 1964. In 2009, he contributed $1 million to create the Bieler Family Internship Program in the Faculty of Agricultural and Environmental Sciences. He has also been generous with his time and insights, as a volunteer and longstanding member of the Faculty’s Advisory Board.

Bieler has spent his entire 60-year career in various agri-food businesses, including cattle breeding, apple processing and maple syrup production. Several of these ventures were launched in partnership with his brother, and fellow McGill graduate, Philippe Bieler, BEng’55. His phenomenal success, both in Canada and the United States, culminated with the launch of his cranberry growing operation in 1984. Today, Bieler Cranberries, located in Saint-Louis-de-Blandford, 100 km south of Quebec City, is the country’s leading cranberry producer, with 1,500 acres in production and an annual harvest of 40 million pounds. In addition to the cranberry farm, Bieler operated a cranberry processing plant, which in 2018 was acquired by Ocean Spray Cranberries Inc.

“Four generations of my family have attended McGill, and it has played a very important role in my life,” said Bieler. “It gave me my start, and it’s where I developed my passion for agriculture, the environment and food. I have a strong belief in McGill and I am confident that this investment will propel the School of Environment’s important work to new levels of excellence and ultimately motivate others to support its vital work.”

Philanthropic gifts, like the gift commitment from Marc and Marie Bieler, contribute to Made by McGill: the Campaign for Our Third Century, the University’s ambitious $2-billion fundraising campaign to support its bold aspirations for research, discovery and learning.

Founded in 1821, McGill University is home to exceptional students, faculty, and staff from across Canada and around the world. It is consistently ranked as one of the top universities, both nationally and internationally. It is a world-renowned institution of higher learning with research activities spanning two campuses, 11 faculties, 13 professional schools, 300 programs of study and over 40,000 students, including more than 10,200 graduate students. McGill’s commitment to sustainability reaches back several decades and spans scales from local to global. The sustainability declarations that the University has signed affirm McGill’s role in helping to shape a future where people and the planet can flourish. 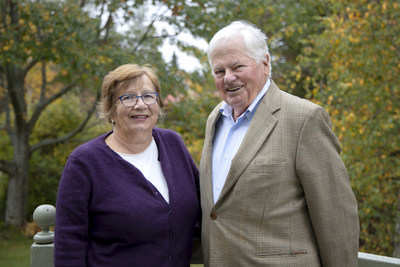