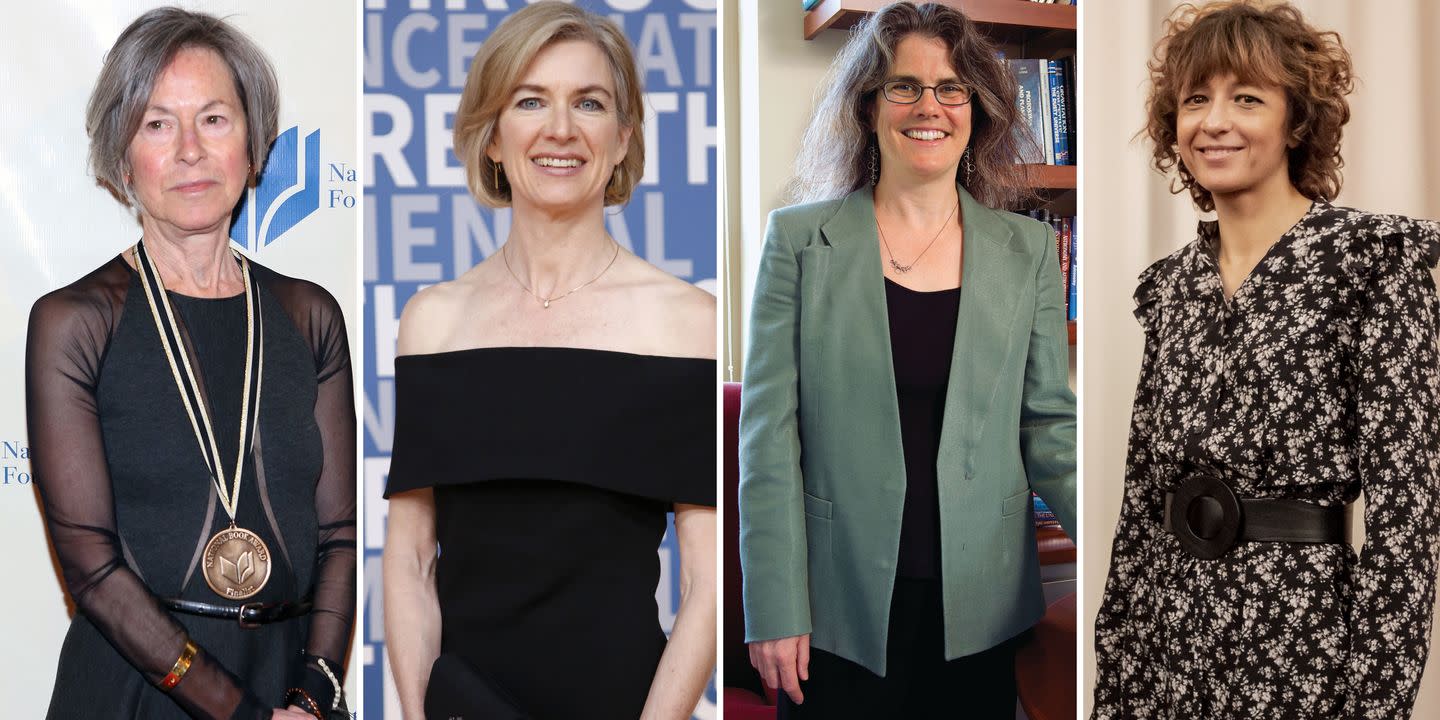 Since the Nobel Prize was established in 1895, less than 60 women have been honored with the prestigious international award. This week, four women–Louise Glück, Emmanuelle Charpentier, Jennifer A. Doudna, and Andrea M. Ghez–were added to that roster, triumphing in literature, chemistry, and physics.

Below, meet the women became Nobel laureates in 2020.

American poet Louise Glück was honored with the Nobel Prize in literature for “for her unmistakable poetic voice that with austere beauty makes individual existence universal.”

The New York-born writer, who is now a professor of English at Yale University, is no stranger to prestigious awards, having previously won the 1993 Pulitzer Prize for The Wild Iris and the 2014 National Book Award for Faithful and Virtuous Night. She was also previously named the United States’s poet laureate in 2003.

Of winning the Nobel Prize, Glück told The New York Times that she was “completely flabbergasted that they would choose a white American lyric poet. … I thought, I come from a country that is not thought fondly of now, and I’m white, and we’ve had all the prizes. So it seemed to be extremely unlikely that I would ever have this particular event to deal with in my life.”

Her oeuvre includes twelve collections of poetry as well as some volumes of essays on poetry. Glück is also known for writing with clarity on otherwise bleak themes, like isolation, rejection, grief, and betrayal.

“When you read her poems about these difficult things, you feel cleansed rather than depressed,” Daniel Mendelsohn, the editor-at-large for The New York Review of Books, told the Times. “This is one of the purest poetic sensibilities in world literature right now. It’s a kind of absolute poetry, poetry with no gimmicks, no pandering to fads or trends. It has the quality of something standing almost as outside of time.”

Her work has also toyed with classical motifs, like those from Greek and Roman mythology. For instance, in her 1996 collection, Meadowlands, she portrays mythological characters Odysseus and Penelope to make observations on modern-day marriages.

Glück is the first female poet to win the Nobel Prize in literature since 1996, when Wislawa Szymborska, a Polish writer, won.

“Most of what I have to say of any real urgency comes out in poems,” she said in the Times interview. “And the rest is just entertainment.

Dr. Emmanuelle Charpentier, a French microbiologist, geneticist, and biochemist, was jointly awarded the Nobel Prize in chemistry with Jennifer A. Doudna for their 2012 work on a new genetic editing method called Crispr-Cas9, which can be applied to experimental treatments for sickle cell disease and cancer therapies. Together, Charpentier and Doudna are the sixth and seventh women to receive a Nobel Prize in chemistry.

“There is enormous power in this genetic tool, which affects us all. It has not only revolutionised basic science, but also resulted in innovative crops and will lead to ground-breaking new medical treatments,” said Claes Gustafsson, chair of the Nobel Committee for Chemistry, in a press release.

The discovery of these “genetic scissors,” which can modify the DNA of living organisms with extremely high precision, came about during Charpentier’s studies of Streptococcus pyogenes, a type of bacteria that can cause harmful infections to human. There, she discovered a previously unknown molecule, called tracrRNA. After publishing her findings in 2011, she partnered with Doudna, an expert of RNA, and the two went on to recreate the bacteria’s genetic scissors in a test tube.

“I was very emotional, I have to say,” Charpentier said at a press conference, per NPR. “Obviously, it’s real, so I have to get used to it now.”

Charpentier is now the director and founder of the Max Planck Unit for the Science of Pathogens in Berlin. Prior to that, she was educated in Paris and contributed work to academic research institutions across the world, including the United States, Austria, Sweden, and Germany.

Most of her career has been devoted to understanding the mechanisms of diseases, focusing specifically on infections caused by Gram-positive bacterial pathogens.

Dr. Jennifer Doudna was jointly award the Nobel Prize in chemistry with Charpentier for their revolutionary work on Crispr-Cas9, becoming the sixth and seventh women to win in this category.

After accidentally discovering tracrRNA, Charpentier tapped Doudna for her expertise on RNA. Their collaboration led to the discovery of Crispr molecules, which made way for highly precise genetic surgery. In less than a decade after the discovery, their technique is now commonplace in genetic laboratories across the world.

In 2017, Doudna wrote A Crack in Creation, a book in which she chronicles the discovery and warns of unforeseen consequences of its use.

“We as a community need to make sure we recognize we are taking charge of a very powerful technology,” she said in an interview this week, per The New York Times. “I hope this announcement galvanizes that intention.”

She currently works as a professor of molecular and cell biology and of chemistry at the University of California, Berkeley, where she holds the Li Ka Shing Chancellor’s Chair in Biomedical and Health Sciences. She also helms Doudna Lab, which discovers and develops CRISPR systems and other RNA-guided mechanisms of gene regulation in conjunction with students and postdoctoral associates.

Along with Dr. Roger Penrose and Dr. Reinhard Genzel, Dr. Andrea Ghez was awarded the Nobel Prize in physics.

Penrose, a mathematician based in England, was awarded for his work for proving the existence of black holes as a direct consequence of Albert Einstein’s general theory of relativity.

Meanwhile, Genzel and Ghez were awarded for their decades-long research in collecting conclusive evidence for a supermassive black hole in our galaxy. Since the 1990s, each has led a group of astronomers that have found “an extremely heavy, invisible object that pulls on the jumble of stars, causing them to rush around at dizzying speeds,” according to a press release. By using the world’s largest telescopes and developing innovative telescopic techniques, the duo has provided “the most convincing evidence yet of a supermassive black hole” at the center of the Milky Way.

“The discoveries of this year’s Laureates have broken new ground in the study of compact and supermassive objects,” said David Haviland, chair of the Nobel Committee for Physics. “But these exotic objects still pose many questions that beg for answers and motivate future research. Not only questions about their inner structure, but also questions about how to test our theory of gravity under the extreme conditions in the immediate vicinity of a black hole.”

Ghez is the fourth ever woman to receive a Nobel prize in physics.

The New York-born scientist is now a professor of astronomy the University of California, Los Angeles. Her decades-long career is also dedicated to the study of star formation.

After her win was announced, Ghez said she hoped to inspire more women to join the field, reported The New York Times. “It’s a field that has so many pleasures, and if you’re passionate about the science, there is so much that can be done,” she said.

She also was one of the authors for the 2006 children’s book, You Can Be a Woman Astronomer.