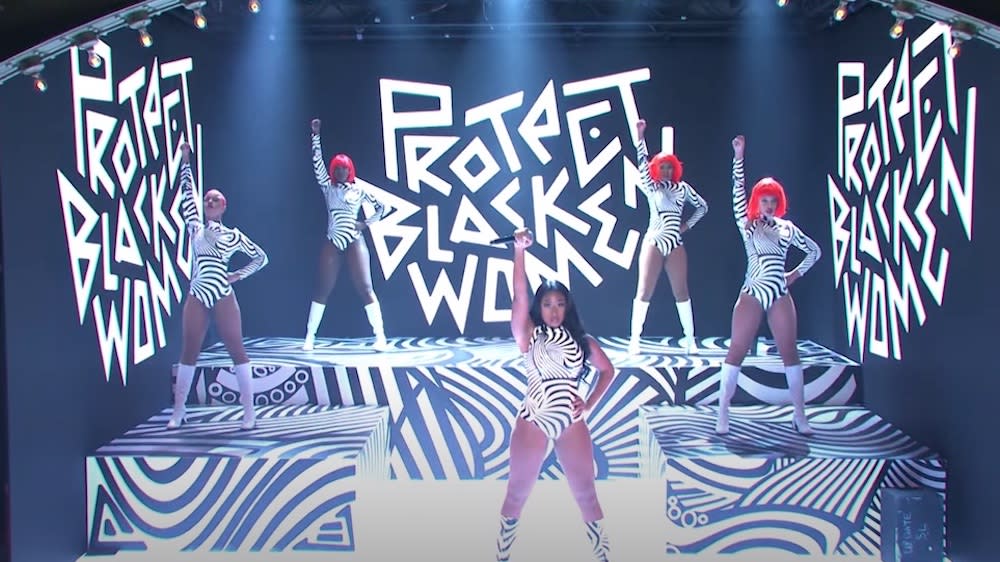 Megan Thee Stallion did not squander her opportunities as the musical guest on “Saturday Night Live,” using the spot to make a direct statement about violence toward Black women.

During her performance of “Savage,” her hit single of last spring, the words “Protect Black Women” appeared on the screen behind her, along with quotes from Malcom X and activist Tamika Mallory calling out Kentucky Attorney General Daniel Cameron over his handling of Breonna Taylor’s death at the hands of Louisville police.

As Megan and her dancers stood at attention in the middle of the song, Mallory’s voice rang out, with the quote “Daniel Cameron is no different than the sell-out negroes who sold our people into slavery” projected behind them. In the case, presented by Cameron’s office, no charges were levied against any of the involved officers that directly related to Taylor’s death.

Megan Thee Stallion used the first performance of the night on SNL to advocate for the protection of Black women, calling out Kentucky Attorney General Daniel Cameron, who handled the Breonna Taylor case. pic.twitter.com/6gyiIOqGh8

Megan’s message was amplified by the fact that she was recently a victim of gun violence herself, from rapper Tory Lanez, she alleges, during a still-unexplained incident in Los Angeles on July 12. According to Megan’s account, the two got into an argument that night and he fired several gunshots at her as she left the vehicle in which they were traveling, resulting in injuries to her feet. The gunshots led people to call law enforcement, who pulled over the vehicle. Lanez was arrested later that night, and although Megan did not report the shooting to police, she has posted alleged details about it on social media, accusing Lanez of shooting her. He has not commented officially on the incident, although he claimed in an album released last Friday that he did not shoot her.

While Megan appeared or was referenced on “SNL” several times on Saturday, the “Savage” performance was the serious one. (In the weeks since the Tory Lanez incident, Megan has shown a rare ability to alternate between serious statements and entertainment, as evidenced by both her August Variety cover story and her social media posts around the release of “WAP,” her recent single with Cardi B, which were followed by accusations toward Lanez).

“WAP” was actually referenced in the show’s opening, a spoof on last week’s controversial presidential debate, when Maya Rudolph appeared as Democratic vice-presidential candidate Kamala Harris, saying “We need a WAP: woman as president.” Later in the show, Bowen Yang, portraying a U.S. TikTok representative, quoted some lyrics from “Savage.”

More substantially, Megan appeared in one of the show’s parody rap/R&B videos, this one around a song about mask-era dating called, “Let me see the bottom of your face.” She also made a brief cameo in a skit spoofing the “NBA Draft Bubble.”

Finally, she performed her latest single, “Don’t Stop,” with a brief cameo from Young Thug, before both appeared — masked — along with the full cast during the show’s credit-rolling finale.