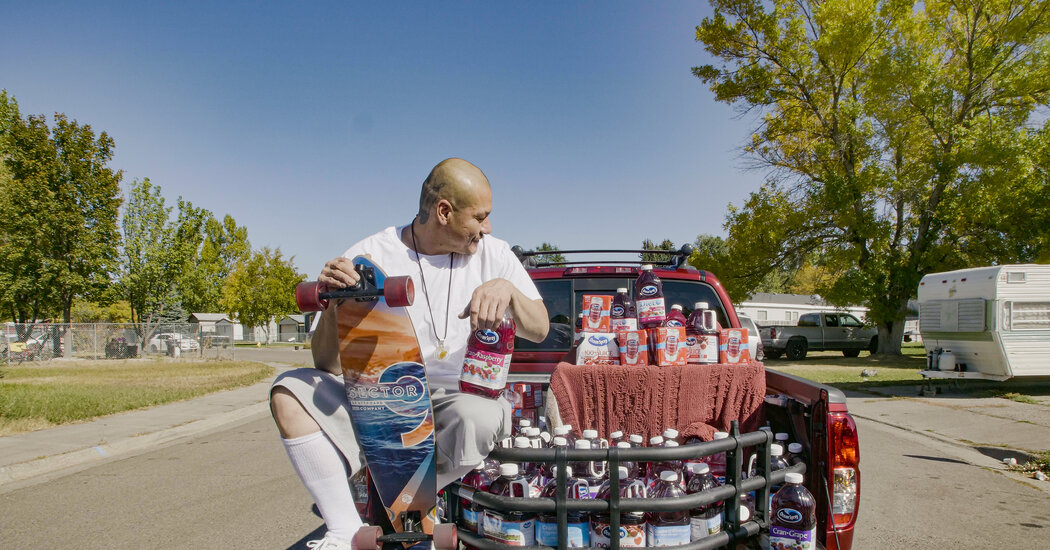 As he sailed down the road, he took a gulp, looked behind him and lip-synced to Stevie Nicks’s soaring vocals: “It’s only right that you should / Play the way you feel it.”

When he clocked in to work, he posted his TikTok but was doubtful viewers would react. “If they ain’t feeling the vibe, I’ll just pull it,” he said. “No harm, no foul.”

But feel it they did. By Wednesday, the video had ballooned to more than 27 million views.

“It’s just a video on TikTok that everyone felt a vibe with,” Mr. Apodaca, 37, said. “I’m happy that I could chill the world out for a minute.”

Among those who felt the vibe were executives at Ocean Spray. On Tuesday, a representative of the company went to the R.V. where Mr. Apodaca lives parked at his brother’s house in Idaho Falls with a surprise gift: a cranberry red Nissan pickup. The truck’s bed was filled with jugs of Ocean Spray juice.

Mr. Apodaca’s morning vibe has also inspired celebrities, C.E.O.s and politicians to film their own takes of his video.

Even Fleetwood Mac’s co-founder Mick Fleetwood cruised in his own video this past week as he lip-synced Ms. Nicks’s voice in the group’s 1977 song, which has surged since Mr. Apodaca’s TikTok gained traction.

According to Billboard, Fleetwood Mac’s “Dreams” had its largest-ever streaming week last week with 8.47 million streams in the United States.

At Ocean Spray’s office, the company’s chief executive, Tom Hayes, said he skateboarded when he was younger, but decided to partake in the trend himself to “keep the vibe going.”

“I got to tell you, it’s a lot more difficult to do it when you’re drinking a bottle of juice,” Mr. Hayes said. He said it was still too early for the company to know if the video had resulted in an uptick in juice sales.

In Montana — where Mr. Apodaca has driven back and forth to visit his daughters Makyla, 12, and Angelia, 15 — Lt. Gov. Mike Cooney popped out of the sunroof of his car and drank from his own bottle of Ocean Spray.

“You’ve got to make time to have some fun on the campaign trail, and I’m thankful that Mr. Apodaca gave us all an opportunity to jam to some Fleetwood Mac and have a viral moment,” Mr. Cooney, who is running for governor, wrote in a statement.

This wasn’t the first time Mr. Apodaca’s videos drew internet fame since his daughter Makyla first persuaded him to get a TikTok account in 2018.

He almost quit once he got his TikTok fame, but his daughter Angelia encouraged him to keep being himself and doing dance videos.

Mr. Apodaca said he didn’t know how far his latest ride with fame would take him, but his bosses at the warehouse let him take some time to figure it out. He’s taking a leave from the potato warehouse and even has an agent now.

“I’m chill with it,” he said. “I’m liking it. It’s awesome that I get to relax and do some videos on my own time now and enjoy it for a minute.”