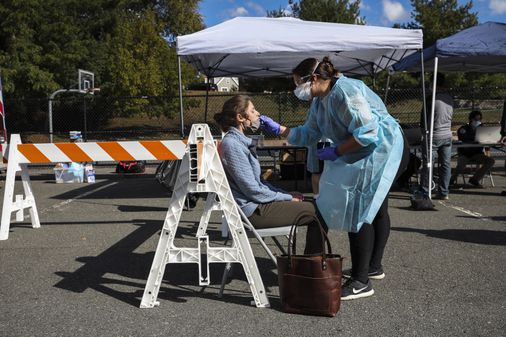 The state continues to edge toward the grim milestone of 10,000 deaths due to the coronavirus.

A University of Massachusetts model suggests the state’s tally could stand at 9,991 coronavirus deaths by Nov. 7, though researchers noted the numbers could range between 9,859 and 10,187.

Last week, the model had suggested the state would see 9,967 deaths a week earlier, by Oct. 31.

The rate of deaths reported each day has declined after a terrifying climb this spring. The model projects it will continue to decline gradually in the next few weeks. But the heartbreaking numbers have not gone to zero.

The model also projects a gradual decline in confirmed and probable coronavirus cases. Governor Charlie Baker has acknowledged a recent rise in cases, but says the state is prepared for the fall and winter.

Researchers from Google who have collaborated with Harvard on a model that looks only two weeks ahead see a darker future, predicting the state death toll will rise to 10,162 by Oct. 24. The UMass model is more optimistic, predicting around 9,786 deaths by the same date.

The UMass model also predicts that the total number of deaths in the United States from coronavirus will reach around 234,000 by Nov. 7.

Looking further into the future, the closely followed model from the University of Washington’s Institute for Health Metrics and Evaluation sees much more pain and suffering. It has projected that the nation could tally more than 394,000 coronavirus deaths by Feb. 1.

Martin finucane can be reached at [email protected]