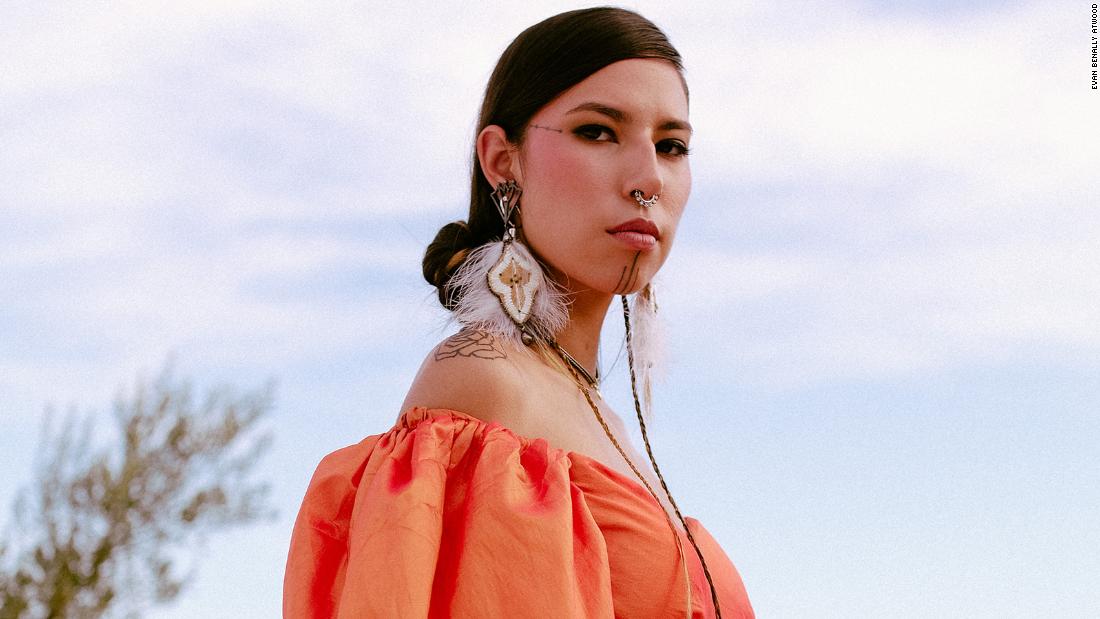 Quannah Chasinghorse is an Indigenous activist and land protector who has become a sought-after model over the past two years. All opinions expressed in this article belong to the author. The feature is part of CNN Style’s series Hyphenated, which explores complex issues of identity.

Despite being into fashion since I was young, I never once thought that I could be a model. I am a proud member of the Hän Gwich’in and Sičangu/Oglala Lakota tribes in the US — but like most Indigenous teenagers, I grew up without any representation in pop culture. I didn’t feel confident or even like the way I looked.

When I was 14 years old, I received my first facial tattoo, a traditional hand poke tattoo called Yidįįłtoo, in a ceremony that was practiced to signify coming of age. It was truly a special moment. I could have done it sooner, but waited until I could better articulate its meaning and sacredness: why it’s so important for us to reclaim this tradition after it — like so many other cultural practices — has been nearly erased. The other tattoos have each been a rite of passage. Not every Indigenous person’s tattoos are the same; they each tell our personal histories.

I have always wanted to represent my people in the best way, and now I am fortunate enough to do so, by being on magazine covers and walking runways. Being someone who can shift how others see beauty is important, because I know a lot of girls who look like me and who can feel out of place.

It’s really beautiful to be a part of a larger change in the fashion industry where people from all walks of life are increasingly represented. But my rule is, if you want to work with me, you have to work with all of me. I won’t cut or change the color of my hair and I won’t cover up my facial tattoos because they are part of my identity as an Indigenous person. When I first started out, I worried that these non-negotiables would prevent me from booking jobs, but instead I have found the opposite. Every person that I’ve worked with has been so accepting, understanding and graceful. I’ve been so blessed.

Last September, I attended my first Met Gala, one of fashion’s biggest nights. I wanted to debut the right way, especially knowing that the theme was a celebration of American fashion. I set out to be myself and honor my indigeneity, which I did by pairing a gold lamé dress designed by Peter Dundas with Native accessories.

The turquoise and silver jewelry actually belong to one of my aunties, who was named Miss Navajo Nation in 2006. I wore many of her beautiful silver and turquoise necklaces, earrings and bracelets.

My mom had to raise me and my brothers as a single parent, and my aunties were a big part of my upbringing and I often talk about my mom and the auntie squad and how much they mean to me. These strong matriarchs have shown me what true power looks like and how to utilize it in the best way possible.

I love how supportive Anna Wintour (who thought it was a brilliant idea to incorporate the pieces) and Peter were, knowing intuitively how much wearing Native jewelry on the red carpet would mean to me. I wore some of my auntie’s pieces again during my shoot with Vogue Mexico, as well as ones made by local Alaskan artists.

My people have always felt invisible and so having this kind of visibility is so meaningful. Despite everything that Native communities have endured and lost, we are still here, and we are proud of who we are.

From a very young age, my mom taught me about our connectedness to one another, to our community and to the land. As Indigenous people, we don’t consider ourselves separate from or more important than nature. When you grow up with a connection to the land, it’s natural that you want to defend it, because it is a part of you. I choose to walk the path I do because of those teachings, and today, I continue to try my best and do my part, spreading awareness to many issues within Native country, including climate justice, protecting sacred lands and waters, Indigenous sovereignty, and the movement MMIWG2S, which stands for Missing and Murdered Indigenous Women, Girls and Two-Spirit People and was formed to stop violence against Native women.

Chasinghorse with Alok Vaid-Menon and Bretman Rock speak at New York Fashion Week in a talk about identity and community within fashion. Credit: Roy Rochlin/Getty Images for IMG Fashion

My mom and my aunties have traveled with me to several rallies and protests, where I have been given space to speak on some of these issues. They’ve come with me to Washington D.C., where I lobbied on behalf of my people to restore our sacred lands through the HR 1146 bill (which was passed on the floor of the House of Representatives last year but did not go further). Because of their constant encouragement, I have found my voice and I am discovering my own power.

Modeling has become another conduit for my advocacy work. It’s become a platform for storytelling as well as spotlighting pressing issues. Because of that, it’s important for me to work with designers and brands who also uphold the same values around climate justice and sustainability. I recently walked for designer Gabriela Hearst, who is sustainability-focused, and has collaborated with Indigenous people, credited them for their work and hired Native models to showcase the pieces. I’ve also partnered with the luxury outerwear brand Mackage, who made a beautiful sustainable and recycled collection and donated to a non-profit organization that supports Indigenous peoples all over the world.

These days, I get so many messages from young Indigenous women who are excited to see my recent fashion shoots in magazines. I can’t even explain the type of feeling I get because it’s such a powerful thing for our people to finally feel seen and heard, after such a long time without being represented in fashion. And this younger generation won’t have to break the first barrier, instead they will be able to walk this path with me.

And while I do see more inclusivity in fashion when it comes to the race, size and gender, there’s always room for improvement. At every show or shoot I’m part of, I meet the most beautiful people, and I’m not only talking about their appearance. So many rising models now have something special and unique about them that they bring — they aren’t just meant to wear clothes. Seeing these changes across the industry is heartening as it evolves into a better version of itself. But we have to keep holding each other accountable. I’m looking forward to watching it grow.