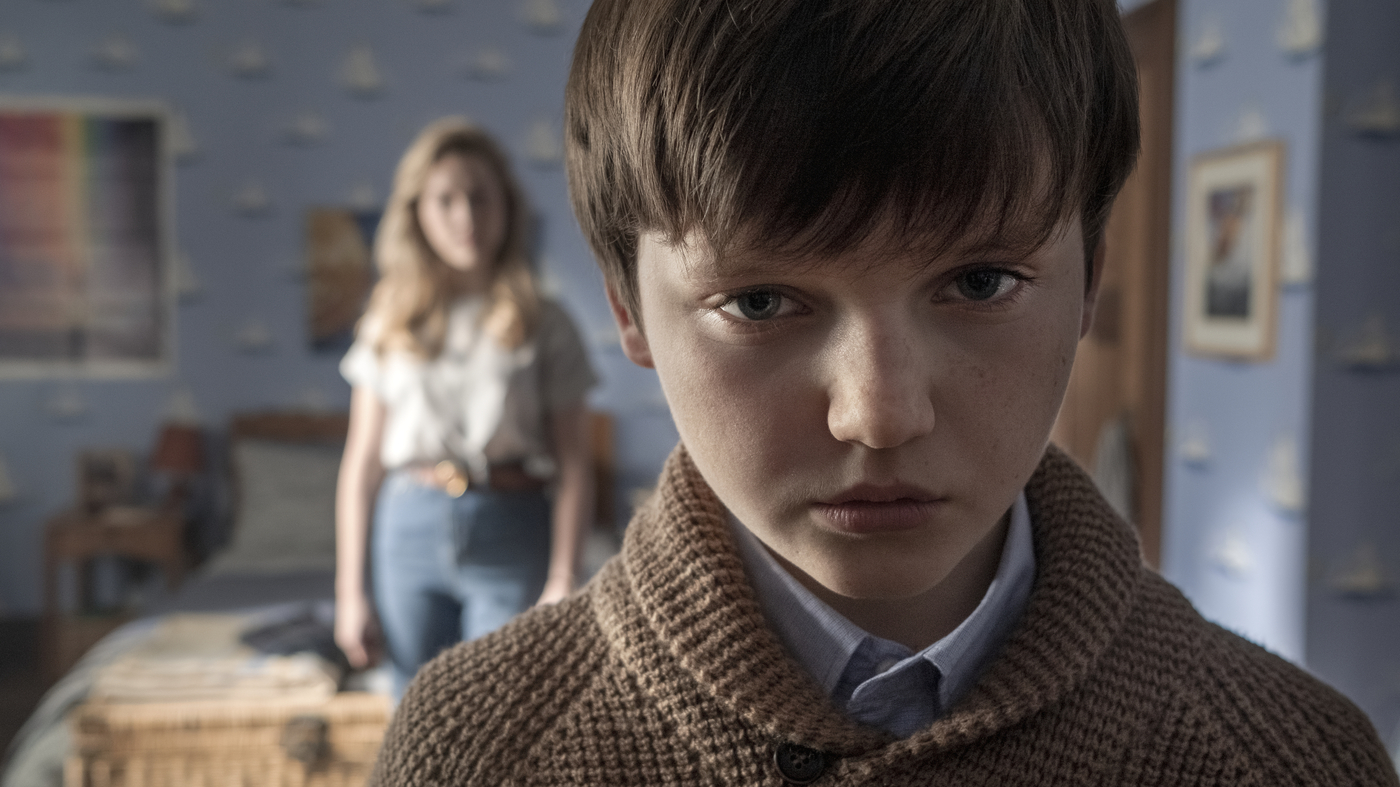 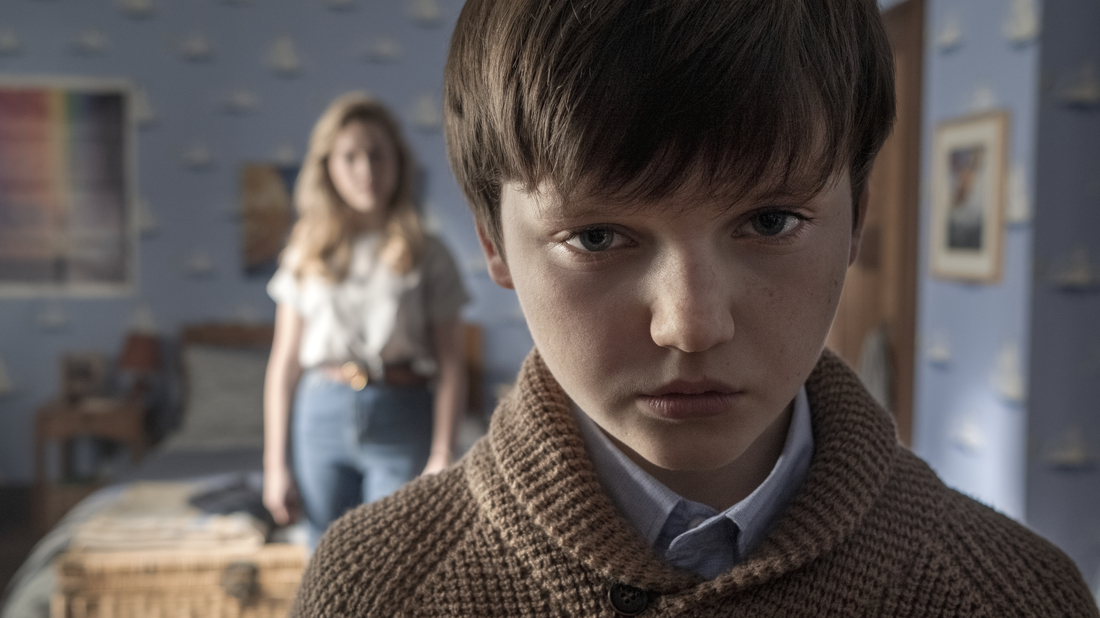 What’s creepier: The kid (Benjamin Evan Ainsworth) or the high-waisted jeans on the au pair (Victoria Pedretti)? The Haunting of Bly Manor makes a case for both. 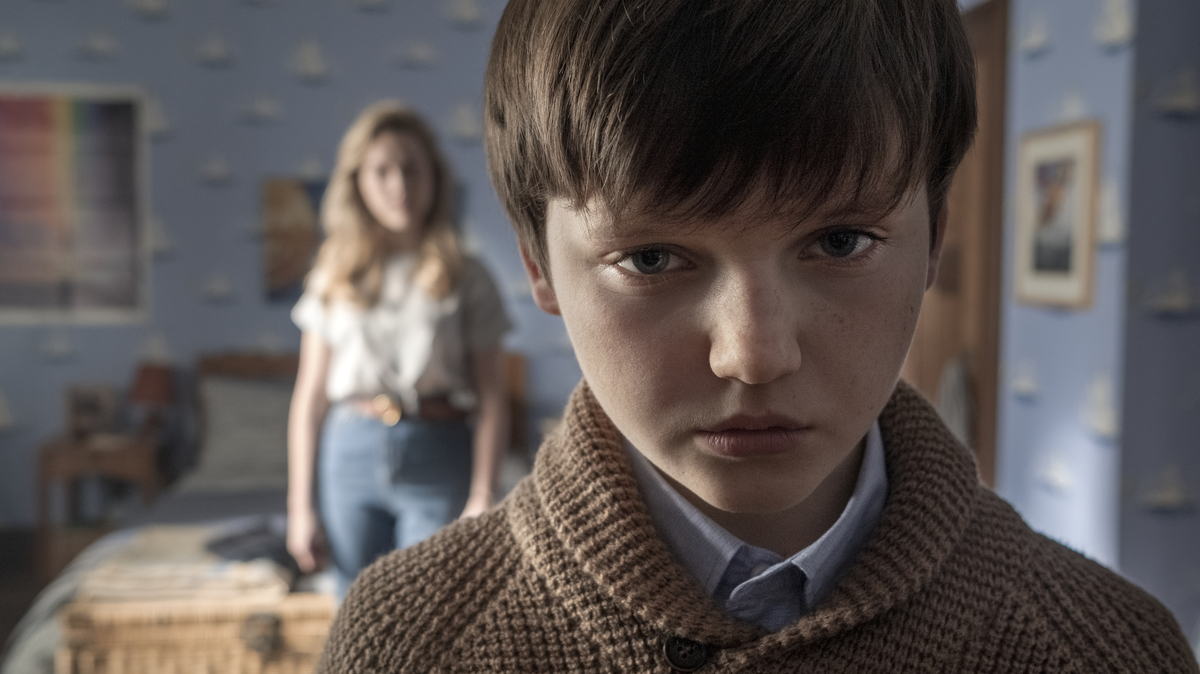 What’s creepier: The kid (Benjamin Evan Ainsworth) or the high-waisted jeans on the au pair (Victoria Pedretti)? The Haunting of Bly Manor makes a case for both.

Netflix’s 2018 series The Haunting of Hill House was a gorgeous ghostly journey that arrived at a too-tidy destination. Based loosely on the Shirley Jackson novel, it chronicled the way violence leaves a hole in the world, and how trauma lingers, shaping memories and sundering families.

It uh … it was a lot more fun than that sounds, though.

Filled with strong performances and unsettling images both overt (every episode came factory-installed with a jump scare) and subtle (showrunner Mike Flanagan packed the shadows in many shots with barely perceptible ghost- faces — so if you were a chicken (hi!) who sensed a big scare coming and executed your go-to move of averting your eyes to stare into the bottom-left corner of the screen, you’d find a pale eyeless face staring back at you, which: No fair).

The story of a family haunted by a terrible loss, and each member dealing (or pointedly not dealing) with it in different ways, Hill House rode its gothic-horror genre elements (dark mansion as the architecture of grief, ghosts as lingering vestiges of psychological damage, etc.) for 9 episodes only to arrive, in its tenth and final episode, at a place of over-explained, mystery-banishing, subtext-exposing plainness.

In the series’ second installment, The Haunting of Bly Manor, creator and showrunner Flanagan seems to have absorbed the lessons of Hill House‘s abiding flaw, and course-corrected. Without spoiling anything, I will say that Bly Manor nails the all-important dismount, and does so in a sincere, humane and bittersweet way that directly addresses the nature, and the purpose, of grief. It’s not overtly tidy or dully expositional — yet it feels, in the best way, inevitable.

It’s probably aided in this endeavor by the fact that Bly Manor’s season is one episode shorter than Hill House, leaving less room to faff gloomily around, and that the reveal of What’s Really Going On doesn’t get crammed into the final episode, but arrives a bit earlier, in a stylish and well-executed flashback episode.

Where Hill House doled out the first half of its season in discrete parcels, with episodes that focused on each family member in turn, Bly Manor‘s story belongs more centrally to Dani (a returning Victoria Pedretti), an American au pair hired by Lord Wingrave (a returning Henry Thomas) to look after his creepy nephew Miles (Benjamin Evan Ainsworth) and arguably creepier niece Flora (Amelie Bea Smith) at his family’s stately country home, following the tragic deaths of their parents.

If that setting, alongside the names of the kids, fires dim memories of your high school reading list, you’re not wrong. Where Hill House keyed off the Shirley Jackson novel, Bly Manor riffs — faithfully at first, then very not — on Henry James’ The Turn of the Screw.

It’s set in the 1980s, however, so instead of bustles and corsets and morning coats, our characters are swathed in high-waisted jeans and pouf-shouldered tops and, in the case of the men, suspenders over striped shirts with white collars. It can be distracting and, if you lived through the ’80s, more than a little unsettling.

Which works in the show’s favor, as it must be said that Bly Manor just isn’t as scary as Hill House was, nor as inventive in its approach to creeping us out. Instead of those silent ghosts lurking in the shadows of many shots, for example, the new installment over-relies on one of the more played out creep-tactics: The bathroom mirror bit.

But that’s okay, as the performances are strong enough to generate empathy for the characters’ comparatively less-horrific plight. American actress Pedretti seems to be uber-Americanizing her au pair to contrast with the clipped Brits around her by pitching up her voice and over-enunciating her Rs. As young creepy Miles, Ainsworth is tasked with playing wise-beyond-his-years, and manages to do so easily, without a hint of the preciousness that can afflict many child actors. And worries that the series is wasting the talents of the great T’Nia Miller, as Bly Manor’s housekeeper, are largely ameliorated when she becomes the focus of a fun, formally inventive mid-season episode.

Besides Pedretti and Thomas, other actors from the Hill House season also turn up as new characters, but it’s best not to say which ones, or whom they play.

So no, Bly Manor isn’t as chilling as Hill House, but it is ultimately a good deal more satisfying, and it whets the appetite for any future installments — though Netflix’s habit of cancelling shows after two seasons leaves that future in doubt.