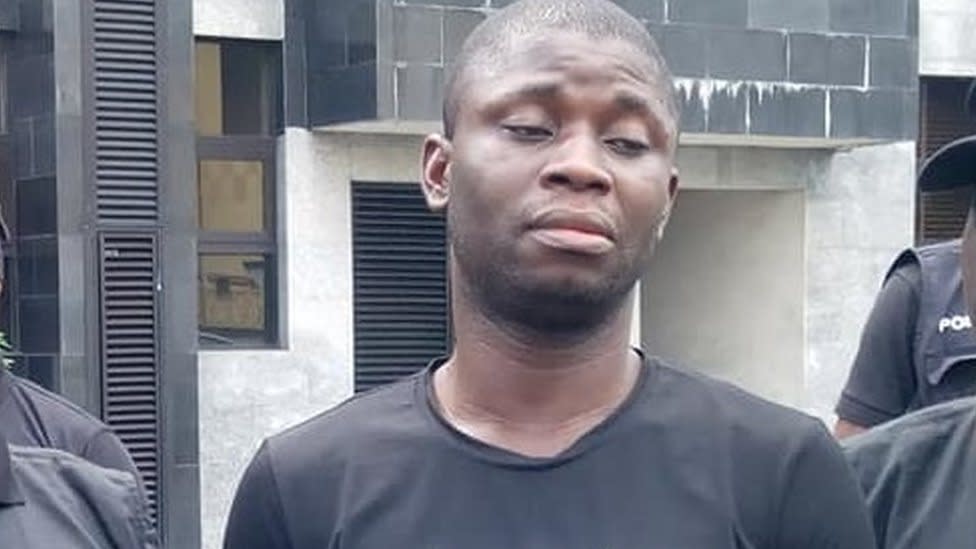 Authorities say the pattern of the murders point to a serial killing – he had sex with his victims before binding their arms and feet with strips of white sheets.

He also used sheets to strangle them, the court heard.

Several of his victims were sex workers.

How was he caught?

At the beginning of the case and unrepresented by a counsel, David-West had pleaded guilty to the murders but the judge demanded a trial because of the “gravity of the crime”.

At the time, authorities had suspected that he was working with accomplices but could not find any evidence as the case went to trial.

At the height of the killings in September last year, outraged citizens of Port Harcourt took to the streets, calling on authorities to solve the murders.

He was arrested on 19 September while trying to leave Port Harcourt as investigators closed in on him.

CCTV had captured him leaving a hotel and the circulated photo went viral on social media.

Security agents found him in a commercial bus travelling to Uyo in Akwa Ibom state, 45 minutes away from Port Harcourt.

What do we know about the killer?

David-West was born in the fishing town of Buguma in Rivers state, an oil-producing coastal community known for its beaches.

The town has a history with oil militants who operated out of its numerous mangrove swamps at the height of the oil militancy in Nigeria’s Niger Delta in the early 2000s.

Police say David-West was a member of the Greenlanders – also known as Dey Gbam, a mafia-styled street gang that sprung out of the armed militant groups.

Those who know him told the BBC that he was an only child born into a polygamous home, but he and his mother lived separately from the rest of the family.

Reporters who saw him in court describe a man whose behaviour was erratic.

“He was quick-tempered, always interjected the judge, and tried to defend himself despite having a lawyer,” said journalist Alwell Ene.

He used low-cost hotels, with poor security and without CCTV cameras, in the city centre and on the fringes of Port Harcourt, according to the police.

On one occasion he murdered a sex worker in a brothel in the Rumuola area of Port Harcourt, a known red-light zone in the city.

Who are the victims?

Very little is known about the victims, except for the names of the nine:

The BBC’s Karina Igonikon in Port Harcourt says friends and family members of the deceased never appeared in court, except for the dad of one of the victims who only came on the opening day of the trial.

“It was as if they had no-one, no address, nothing to trace them with,” she said.

Police say he also confessed to killing six other women in Abia, Imo, Edo, Lagos and Edo states but he was not charged for those murders.

“No-one came forward for those murders and there was little evidence to pin them on him,” state prosecutor Chidi Ekeh told the BBC.

There are disputes about the identity of the women, and how they were able to follow the killer to the hotel.

Investigators say he lured his victims by claiming to be a military officer and promising huge amounts of money for their time.

One of the victims, Jennifer Nwokocha, was said to have arrived Port Harcourt from Lagos to celebrate her birthday.

“They met at the hotel where she was staying and had drinks, exchanged numbers and met up later in the night where she met her death,” an investigator told the BBC.

Police say he threatened the women with a knife and prevented them from raising alarm.

Before killing them he robbed them of money, ATM cards and other valuables.

“We found the victims naked, bound with a white strip of cloth on their ankles and arms and neck.

“Although there is no concrete evidence that points to some form of ritualistic killing, I personally believe it was connected to such,” Mr Ekeh told the BBC.

The one who survived

Benita Etim, a 23-year-old sex-worker, survived a night with the killer.

She was not a witness during the trial as authorities say her whereabouts are unknown despite being told not to leave the state.

In an interview with the BBC in September last year, she narrated how a man she met on 18 August had tied her up in a hotel room.

She described how she was raped before he threatened her with a knife and tied her up to a chair.

“He cut the bed sheet into strings and bound my hands and legs to the chair and used another strip to tie my mouth.

“I shouted but nobody heard me because he had turned on the volume of the TV and the power generating set was close to the room,” she said.

“I begged him not to kill me.”

At this point, he left the room with her phone and never returned.

Hotel staff found her the next day after she had somehow managed to force the gag out of her mouth and screamed for help.