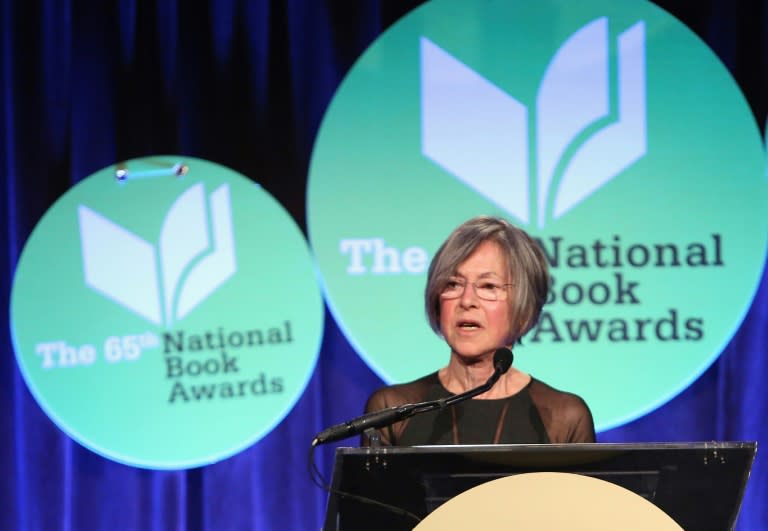 Like theirs, the austerity of her poetry is a source of strength: “The unsaid, for me, exerts great power,” she wrote in a collection of essays on poetry, “Proofs and Theories”.

Gluck “seeks the universal, and in this she takes inspiration from myths and classical motifs, present in most of her works,” the Nobel Academy said.

Her collections “The Triumph of Achilles” (1985) and “Ararat” (1990) address “almost brutally straightforward images of painful family relations”, the jury said, noting that her use of a “deceptively natural tone is striking”, with “no trace of poetic ornament.”

Gluck is also a poet of radical change and rebirth, describing in her poem “Snowdrops” the miraculous return of life after winter.

Her latest collection, “Faithful and Virtuous Night” (2014), garnered her the National Book Award.

The New York Times described the work as “a story of adventure, an encounter with the unknown (as well as) a story of the world you’ve always known.”

The collection “tells a single story but the parts are mutable, the great sweep of its narrative mysterious and fateful, heartbreaking and charged with wonder,” the Times review said.

The winner of a Pulitzer Prize in 1993 for her collection “The Wild Iris”, Gluck is a professor of English at Yale University despite never finishing college.

She grew up in Long Island, New York, the descendant on her father’s side of Hungarian Jews who emigrated in the early 20th century.

Though her family encouraged creativity, it was not an easy childhood, marked by anorexia and the knowledge that she had a sister who died when very small.

In her 1990 poem “Lost Love”, she wrote: “My sister spent a whole life in the earth. She was born, she died. In between, not one alert look, not one sentence.”

In a 2006 interview she said was a lonely child.

“My interactions with the world as a social being were unnatural, forced, performances, and I was happiest reading. Well, it wasn’t all that sublime, I watched a lot of television and ate a lot of food, too.”

After dropping out of college and weathering a failed first marriage, Gluck began to find her feet with her first collection of poems in 1968, “Firstborn”.

With her second marriage, which produced a son, she found more stability, returning to her studies and eventually landing a teaching job at Godard College in Vermont.

The Academy noted that Gluck’s work was often marked by “humour and biting wit”.

Regarding her frequent appeal to floral imagery, with lines like “The trees are flowering on the hill/They are bearing large solitary blossoms, japonica”, Gluck quipped: “I got a lot of horticultural inquiries, and I’m not a horticulturist.”