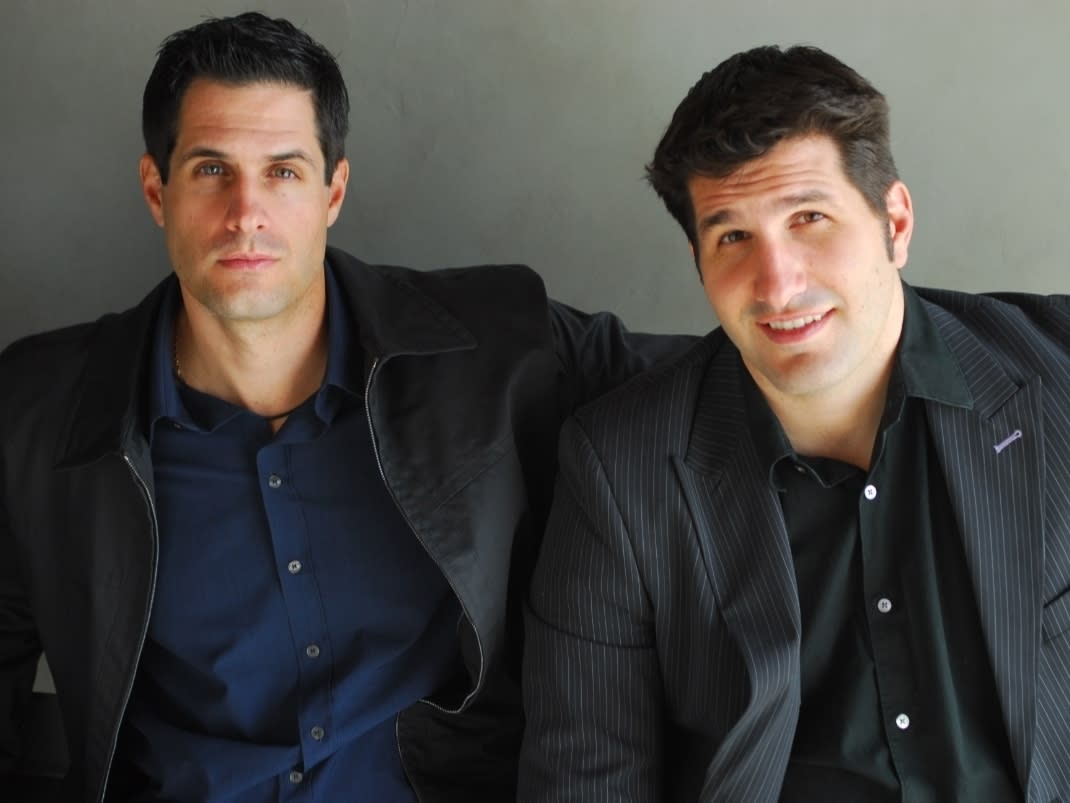 “We grew up in the Jersey Shore — immigrant family who believed in working hard and getting educated,” Charley said. “We felt we had to get more traditional jobs, but we always loved movies and TV shows.”

Charley lists “Braveheart” as one of his greatest influences. The film came out in May 1995, right when he went through senioritis at Central Regional High School. (His brother, Dr. Triantafillos Parlapanides, is now Central Regional’s superintendent.)

“I was just blown away. It just filled my chest in a way I’d never experienced in in life,” he said. “That’s when the film bug really bit me.”

Getting Into the Industry

Charley and Vlas began to devour scripts. The Parlapanides brothers used to read “Scenario,” a magazine which published a few screenplays in each issue. They also picked up screenplays available at the Barnes & Noble.

They didn’t know anyone in Hollywood. They had no idea how the industry worked. But they discovered the ins and outs of screenplays and got to writing.

The brothers hoped to bring Greek-American culture to the big screen in 2000 with “Everything for a Reason,” an indie dramedy they wrote, directed and produced. The film premiered at the AFI International Film Festival, and The Shooting Gallery picked it up for distribution.

Unfortunately for the film, The Shooting Gallery went out of business in 2001. But perhaps the title of “Everything for a Reason” foreshadowed their careers more than anything.

“By the time we got the film back, ‘My Big Fat Greek Wedding’ came out, and the whole Greek-American thing had been done,” Vlas said. “But we learned a lot from that.”

Since then, they’ve had several successes. The Parlapanides brothers cowrote “Immortals,” a 2011 box-office success about a mortal man Zeus chooses to fight against the ruthless King Hyperion. Their work also includes Netflix’s 2017 adaptation of the best-selling manga “Death Note.”

Several factors made “Blood of Zeus” possible. Of course, it goes back to the brothers’ passion for Greek mythology.

“(Greek gods) were kind of the first superheroes,” Charley said. “Before there was the Flash or Quicksilver, there was Hermes. Before Marvel and X-Men, there were the Olympians.”

In the past few years, Netflix has also bet big on anime. Netflix executive John Derderian reached out to Charley and Vlas about ideas that could become anime-style series. They pitched to him a tale of Greek mythology they always wanted to tell.

“Blood of Zeus” tells an original story, but the show alludes to two Greek myths — they won’t say which ones, since that will spoil the plot twists. It’s based on a simple idea involving the oral traditions of ancient Greek storytelling.

“What if one of those stories got lost?” Vlas said. “What if there was a story nobody’s ever heard of but it’s with all these beloved characters that we have a great affinity for?”

Powerhouse Animation Studios, which produced the series, would ship storyboard animatics to South Korea, where artists hand-drew scenes. Only three of the eight episodes had been fully animated by the time the coronavirus hit South Korea.

They asked their producer whether this would be a problem. But he told them not to worry, because animation is “COVID-proof.”

They still remember when COVID-19 hit closer to home. The Parlapanides brothers sat on the editorial couch March 11 when the NBA suspended its season and Tom Hanks and Rita Wilson announced their diagnosis. The virus got real.

They took everything they needed home and sheltered in place. Although it slowed things down, production of the show didn’t come to a halt.

The pandemic sent greater reverberations through different parts of the industry. Live-action filming faced delays, and theater releases got postponed. All things considered, the Parlapalides brothers consider themselves lucky.

“We feel animation is that safe haven, and it is one of our mom’s prayers being answered,” Vlas said. “Because out of everything you could be working in as a writer — TV, movies, animation — animation is probably the safest place to be working.”

They hope “Blood of Zeus” lasts five seasons, but Netflix will evaluate the program’s success after its initial eight episodes.

The Parlapanides brothers still love to come home to Seaside Park and visit Central Regional for a game or the spring production.

“We definitely have those small-town values of hard work, being accountable and being humble and hungry,” Vlas said. “It was never for us about rubbing elbows with celebrities. It was always about telling the stories, telling it well and moving people emotionally.”

This article originally appeared on the Lacey Patch