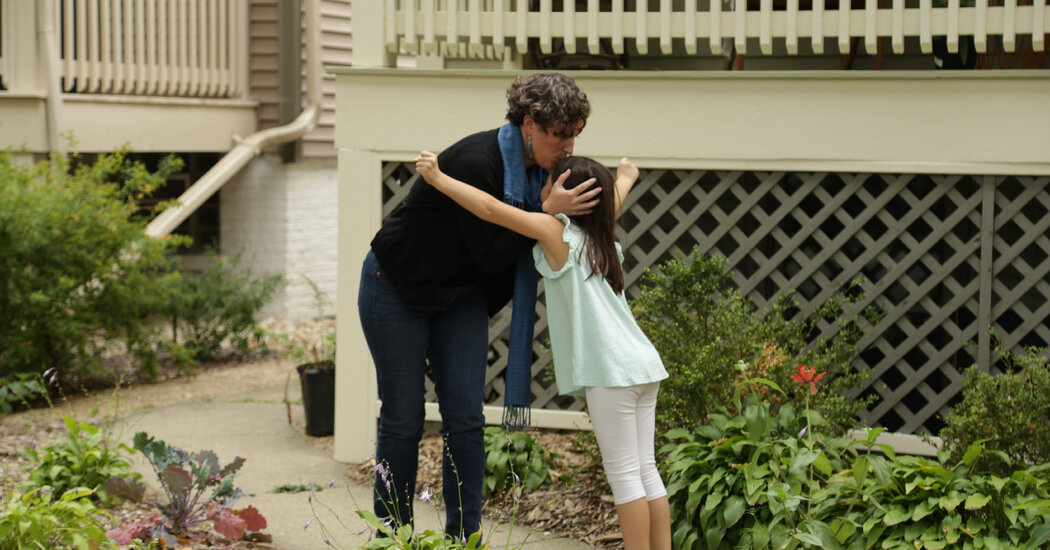 EVANSTON, Ill. — Like millions of parents, Kimberly Marion Suiseeya, a political-science professor at Northwestern University, saw her work life upended when her third grader’s school shut down in March. Later, she was demoralized to learn that local schools would not reopen this fall.

But Dr. Marion Suiseeya faced an additional source of stress: her looming all-or-nothing tenure evaluation, which will determine whether she earns a lifetime appointment at Northwestern or must find a new job.

“This year was critical for me to finalize my tenure packet,” she said. “I stare at my computer and try to be productive. And every five minutes my daughter comes in and says, ‘My Zoom link doesn’t work.’”

The pandemic has been brutal on many working mothers, especially those with little leverage on the job. Experts say it may be uniquely unforgiving for mothers in so-called up-or-out fields, where workers face a single high-stakes promotion decision. The loss of months or more of productivity to additional child care responsibilities, which fall disproportionately on women, can reverberate throughout their careers.

“Will this disproportionately affect female lawyers, accountants, people in various positions in finance, management, academics, all of whom have up-or-out or winner-take-all positions?” asked Claudia Goldin, an economic historian at Harvard who studies women in the labor market. “I would say yes.”

The angst has been especially evident on some college campuses, which tend to be more fertile grounds for activism than other up-or-out workplaces.

At Northwestern, hundreds of female faculty members have pressed the university to alleviate the disruption of the pandemic, but with limited success. “The present is unsustainable,” said Susan Pearson, a tenured Northwestern history professor who has helped rally colleagues to seek more accommodations.

Dr. Pearson, who is divorced and is the primary caregiver for her two children, said parenthood was too often seen in academic settings “as a personal choice” rather than as a societal obligation — “like if you choose to live two hours away from work and you have a long commute, the university shouldn’t have to do anything about it.”

Northwestern, like other universities, initially responded to the pandemic by pausing the so-called tenure clocks of junior faculty members, giving them an extra year to publish academic work that would help them earn the promotion.

But research has shown that stopping the tenure clock is an imperfect policy. According to a study of tenure decisions in economics departments published in 2018, men were substantially more likely to receive tenure at their first job after the university allowed an extension for new parents of either sex, while women were substantially less likely to receive tenure than they were before the policy change.

The reason, said Jenna Stearns, an economist at the University of California, Davis, and a co-author of the paper, is that men appear to devote more of the additional year to academic research, while women appear to spend more of it managing parental obligations.

There is evidence that the pandemic is having a similar effect, with the gender divide in new academic papers skewing more male in recent months.

Several women on Northwestern’s faculty said they doubted that the additional time for tenure consideration would offset the pandemic’s impact on their work.

Dr. Marion Suiseeya, who is completing a book that she considers critical to her tenure prospects — about the injustices facing people who live in forests — estimates that she was two months from finishing the manuscript in March, but that it will take her at least four more months to finish now.

She said that she was spending no more than two hours a day on the project, versus the three or four she would spend in a typical term, and that the quality of those work hours had declined significantly.

“I’m literally working in a closet,” she said. “My daughter has different perceptions. She thinks all I do is work. But I work a lot less.”

Dr. Marion Suiseeya intends to come up for tenure in the spring as originally planned because the stress of an unfinished book is too hard on her family and she doesn’t want to prolong it. But she is not sure she’ll be ready.

Instead of an extension, she would prefer additional child care subsidies and a more nuanced evaluation process with less weight on whether her book has been published.

Magdalena Osburn, a geobiology professor at Northwestern, divided days into two-hour shifts with her husband, a fellow research scientist, when their son’s day care facility shut down in March.

“With a 4-year-old, there are interruptions even when it’s your time to work,” she said. “Mommy knows where everything is. Nothing can proceed without Mommy’s permission.”

Dr. Osburn, who submitted her tenure materials this month, said she was down to three or four hours of daily work after the pandemic hit, with much of the time spent figuring out how to teach a lab course online. Though her son’s day care provider reopened in July, her output had been further squeezed by months of unreliable lab access for herself and her students.

In the winter term, she is scheduled to teach two courses online that will again require considerable preparation, she said, and some relief from her teaching obligations would have been far more helpful than delaying the tenure decision.

“I don’t need a clock extension,” Dr. Osburn said. “I need an acknowledgment that this year is trash.”

Other Northwestern professors seeking tenure echoed those concerns, as did a survey of nearly 200 female faculty members by a campus group. The survey also highlighted the tendency of other workplace obligations, such as advising students struggling with emotional stress, to fall disproportionately on women.

“Beyond the pandemic, there’s the protests and everything that’s happening with Black Lives Matter,” said Sylvia Perry, an assistant professor of psychology who teaches a course on prejudice and stereotypes. “Students wanted to take time to talk about what’s going on, how it’s impacting them as individuals, because they know I study it, because of my identity.”

Dr. Perry, who is Black, said additional flexibility in her teaching schedule would be “extremely helpful.”

The latest on how schools are reopening amid the pandemic.

Thus far, however, Northwestern has offered faculty members few across-the-board policies beyond the tenure-clock extension — primarily a subsidized rate for up to 10 days of child care. While it has announced support for alternative work arrangements such as sharing teaching responsibilities, faculty members must consult their supervisors about these options — and many junior faculty members are wary of doing so for fear of being labeled slackers.

In an interview, Kathleen Hagerty, the university’s provost, said there was always a trade-off between blanket policies like the tenure-clock extension, which she conceded could have inequitable effects, and more tailored accommodations that put the onus on employees to arrange them.

“That’s the contradiction,” she said, adding that she generally favored the latter approach. “Maximum flexibility is the university policy. That has been the order from the top: to be as flexible as you possibly can, as empathetic as you possibly can.”

Faculty members say they have been disappointed that there wasn’t more planning for the possibility that schools and child care facilities would not reopen in the fall — or more sensitivity to the challenges.

“I have two young ones at home and a working spouse, though she has definitely taken on the heavy lift and allowed me to focus on Northwestern!” one administrator remarked in an email after Dr. Pearson asked about plans for the fall. The administrator assured her that the university took the issue very seriously.

Unsatisfied — “that set of assumptions and practices is EXACTLY what I am suggesting that NU not perpetuate,” she later told the university’s president by email — Dr. Pearson teamed up with a fellow historian and mother, Amy Stanley, to write a letter to the administration. Among the options they urged the university to explore was paid leave for parents with pressing child care needs and a reduction in teaching obligations.

Both women have tenure and said it allowed them to speak up for more vulnerable colleagues, including assistant professors and faculty members not on the tenure track concerned that their jobs were in danger. More than 200 faculty and staff members signed the letter, but the administration barely acknowledged it, Dr. Pearson said.

Dr. Hagerty said that while the administration didn’t respond directly to the letter, it later circulated information to deans about resources available to faculty members, which she said the university might not have done enough to publicize.

Last week, the Organization of Women Faculty, the campus group that produced the survey of female professors, released its own proposals. They included additional child care subsidies and adjustments in tenure standards to “reflect pandemic realities.”

Dr. Hagerty, who said she was willing to take part in a moderated discussion that the group had requested, said the concerns raised in the survey were painfully familiar to her as a longtime professor with three children.

“In my younger days, I didn’t want to ever suggest that I couldn’t do something because I had kids,” she said. “They said, ‘Be department chair, even though your husband is in Washington all week and you’ve got three kids under 6.’ You know, ‘Sure, I’ll do it.’” She added: “It was killing me, but I did it.”