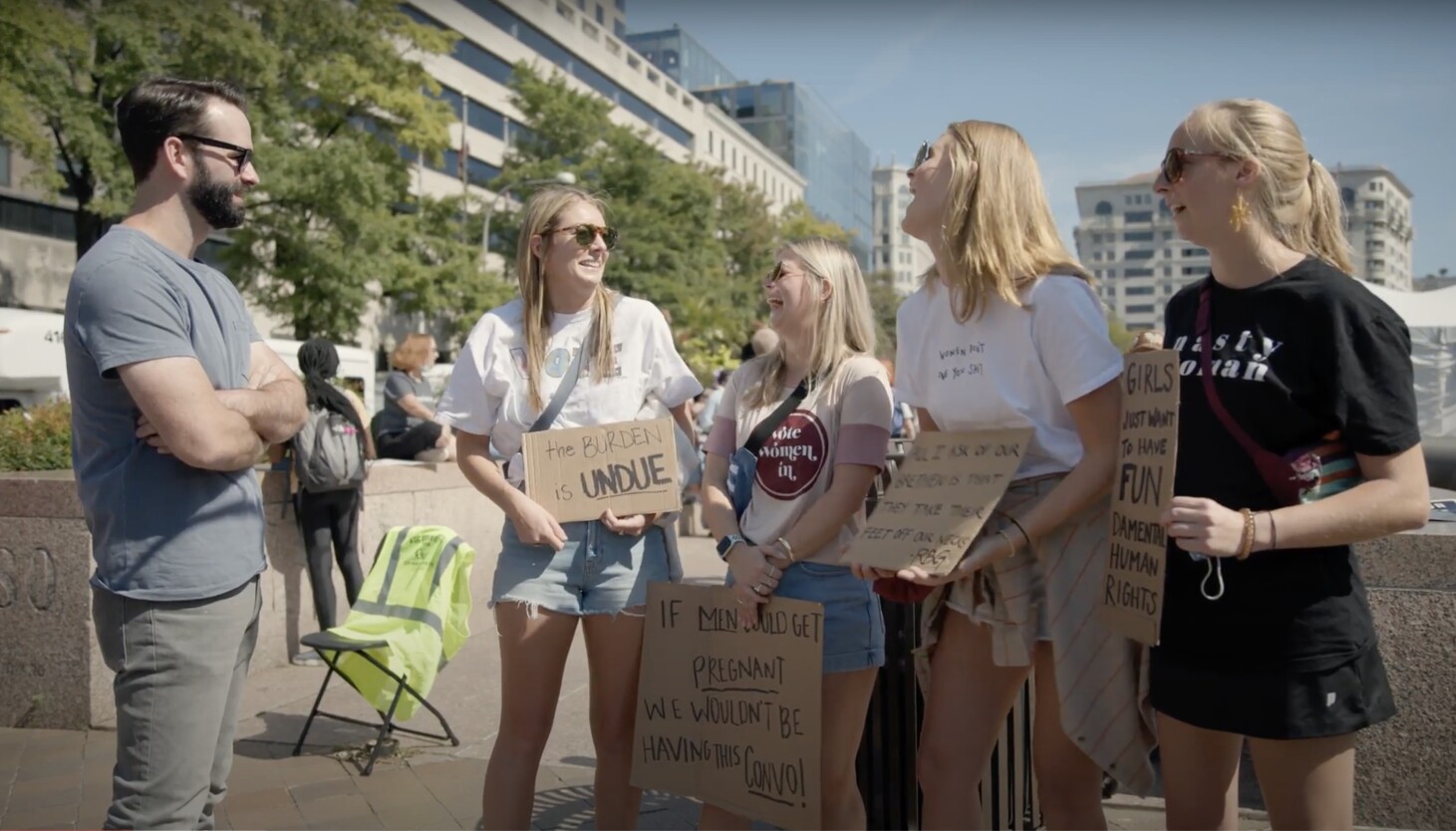 Podcaster Matt Walsh can be abrasive on Twitter, where he’s known for skewering liberals and their causes mercilessly. But when he began posing a four-word question to strangers a year ago, Walsh was polite and nonconfrontational; it was the question itself — and his insistence that there is a correct answer — that got under people’s skin.

The question was “What is a woman?” and it’s both the title and subject of a film released last week by Walsh and The Daily Wire, the conservative media company founded by Jeremy Boreing and Ben Shapiro.

In the film, Walsh, a 35-year-old father of four who lives in Nashville, travels around the world asking the question of strangers, from women on the streets of U.S. cities to men in Africa. He also interviews specialists, including a gender-affirming marriage and family therapist in Nashville and author and psychologist Jordan Peterson.

He’s just a funny guy asking a serious question, one that he believes “brings down the house of cards” of gender ideology. “Most of the people we talked to either didn’t want to talk about it, or they appeared to be confused about something as simple as what a woman is,” he told me.

The wafflers included the Nashville therapist who said, “I’m not a woman so I can’t really answer that,” to a group of women who laughed and said, “That’s a stumper,” to a man on the street who said, “I honestly don’t know.”

Dr. Marci Bowers, a gynecologist and surgeon, said womanhood is “a combination of your physical attributes and what you’re showing to the world and the gender clues you give.” Patrick Grzanka, an associate professor at the University of Tennessee, said a woman is “a person who identifies as a woman” and angrily pushed back at Walsh, asking why he would even ask the question.

It’s a question, of course, that’s not only being asked by a podcaster on the street but also in the halls of Congress. Republican Sen. Marsha Blackburn of Tennessee asked Judge Ketanji Brown Jackson to define a woman during Jackson’s Supreme Court confirmation hearings in March. Jackson replied that she couldn’t, “not in this context. I’m not a biologist.”

There is method in what Walsh’s critics see as his madness. He believes that extremists in gender ideology have dealt conservatives a winning hand in the culture war by trying to vaporize ideas about sex and gender that were unquestioned for most of human history. Walsh points out that he’s being called an “extremist” and a “dinosaur” for saying things that were widely considered biological facts two decades ago.

“This is a fight we can actually win,” he told me. “When I say ‘we,’ I mean rational, sane people. … You don’t have to be a conservative to realize that men are men and women are women.”

He added, “The other side can be brought to its knees by one question, ‘What is a woman?’ There’s a real weakness there, and we can win this fight, and then it becomes like kicking blocks out of the Jenga tower. You win this one, and then you move on to the other cultural battles.”

Beyond that, Walsh hopes to bring the issue to the attention of people beyond the “conservative bubble of people who listen to my podcast” and reach people who not are politically engaged and may be unaware of what’s being taught on the frontlines of gender ideology.

Some of the people Walsh interviews in the film say that gender cannot and should not be assigned by doctors at birth and that children should be encouraged to explore different forms of gender expression without being influenced by their parents or society.

At the center of this discussion is the issue of transgender rights, which Americans are still divided on, largely along party lines. According to a February report from Pew Research Center, 38% of Americans said that greater acceptance of transgender people is generally good for society, 32% said it is bad and 29% said neither good nor bad.

Although a growing share of Americans say they know someone who is transgender or uses gender-neutral pronouns (they/theirs instead of she/hers and he/him) they remain sharply divided on the subject of pronouns. Last year, half of respondents said they are comfortable using alternative pronouns when asked, while 48% said they are not. These percentages are “virtually unchanged” since 2018, Pew said.

Walsh, who calls progressive gender ideology a cult, uses the divide over pronouns as a tidy insult, often responding to negative tweets about him by simply saying of his critics “pronouns in bio.”

It’s unclear if Walsh’s campaign will change any minds, although it is excellent publicity for “Johnny the Walrus,” his children’s book about a boy who decides he is a walrus. (Amazon lists it in the genre of “political commentary and opinion.”)

Walsh, who drolly dubs himself a best-selling children’s book author and women’s studies scholar, may be trolling all of us with the film, which could be the most elaborate trailer for a book in all of history.

Then again, he could be asking the question that turns the culture war.

So, on the question du jour, what would Walsh say if someone on the street came up to him with a microphone and asked, “What is a woman?”

“An adult human female,” he said. “I would have given an answer that is biological, because that is 100% the answer.”

For the record, that’s what the online dictionary Merriam-Webster says, too.