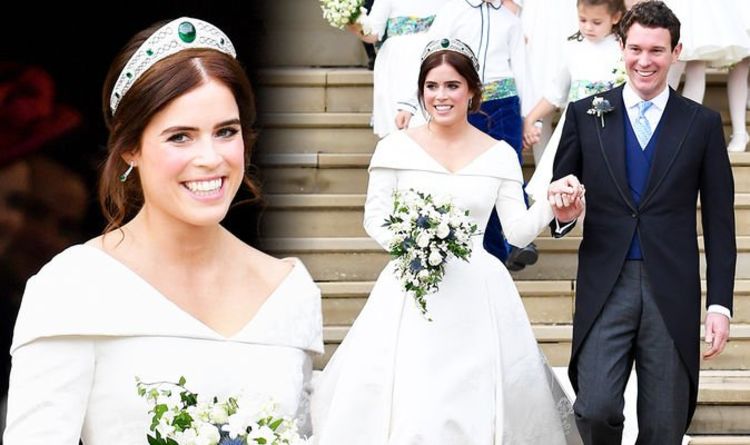 Princess Eugenie and Jack Brooksbank celebrate their two year wedding anniversary today. The royal couple married at Windsor Castle in a ceremony attended by many members of the Royal Family.

Like many royal brides, the Queen’s granddaughter borrowed a tiara from the royal collection for the occasion.

It has a central emerald with a further six jewels down the band and could fetch as much as £10million at auction.

The gown had an off-the-shoulder style with a V-neck at the front and back.

It had long sleeves and highlighted Eugenie’s slim waist with a fitted bodice.

The Princess-style dress continued into a full pleated skirt which was followed by a two metre train.

Princess Eugenie worked closely with the designers on her gown and made sure to add her own personal touches.

Before her ceremony, she told Vogue UK: “[The dress] is the one thing that I was really decisive about.

“As soon as we announced the wedding, I knew the designer, and the look, straight away.

“I never thought I’d be the one who knew exactly what I like, but I’ve been pretty on top of it.”

While Princess Eugenie knew what design she wanted, she made sure it had a personal message and a nod to the Royal Family.

The style of the dress was made to show off Princess Eugenie’s scar from an operation she had as a child for scoliosis.

Woven into the material was a thistle, to represent her love of the Royal Family residence Balmoral.

It also featured a shamrock for her Irish heritage and the York rose and ivy to nod to their home of Ivy Cottage at Kensington Palace.

The fabric was designed by Mr Pilotto and Mr De Vos at their studio in East London and includes a number of symbols that are meaningful to Princess Eugenie as motifs,” the palace statement continued.

“The symbols are a thistle for Scotland acknowledging the couple’s fondness for Balmoral, a Shamrock for Ireland as a nod to the bride’s Ferguson family, the York rose and ivy representing the couple’s home.”