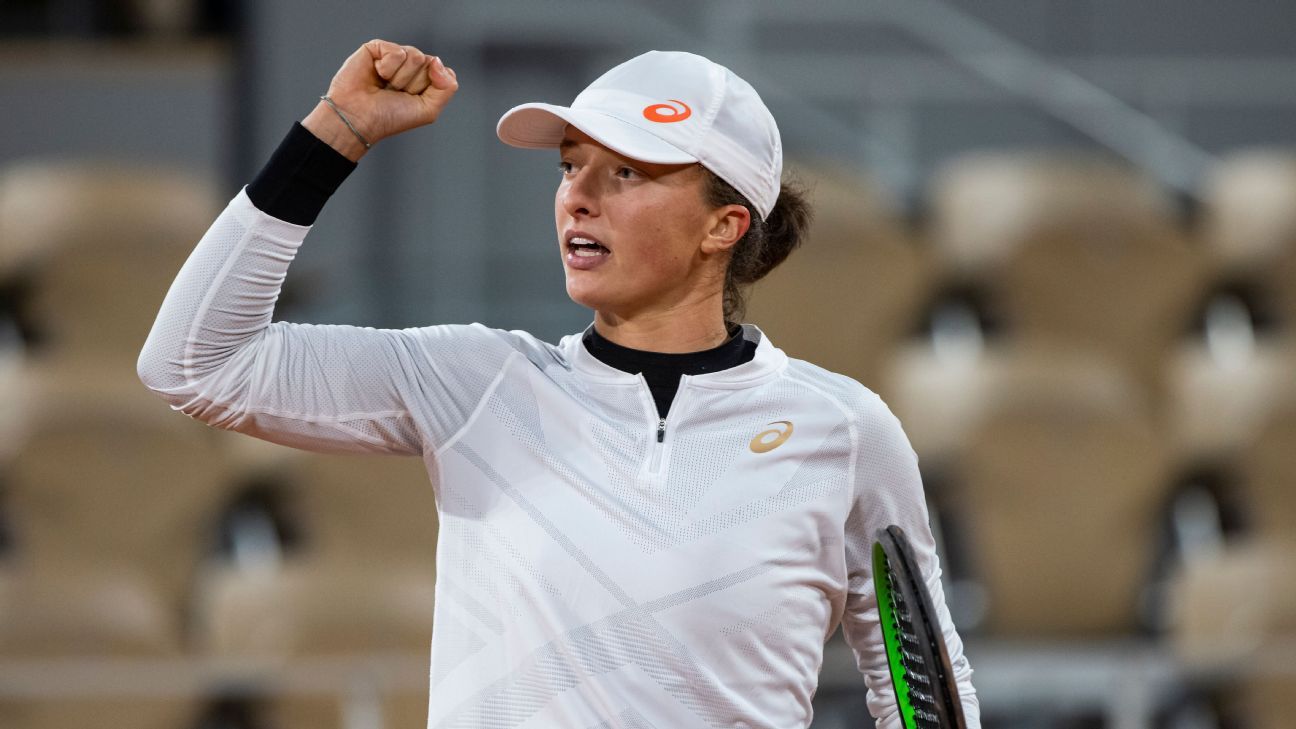 On the other side of the draw is unseeded Iga Swiatek of Poland, the sport’s latest teen phenom who has peaked at the perfect time and all but humiliated her opponents, including No. 1 seed and tournament favorite Simona Halep. She will face the ultimate Cinderella story in Argentina’s Nadia Podoroska, a qualifier — the first to make it to the semifinals in Paris — who is ranked No. 131 in the world and playing in just her second career Grand Slam.

“When you think about the conditions of this tournament and the slowness of play and the heaviness of the ball, these are the four players who had the mindset of whatever it takes throughout the tournament,” said 21-time major doubles champion and ESPN analyst Pam Shriver. “Collectively these are the women who have been resilient and have showed incredible mental toughness under some of the most difficult conditions ever at a major. They are all very different, but the common thread is their temperament and grit.”

For the 30-year-old Kvitova, it marks her first semifinal appearance at the tournament since 2012, something she called a “miracle.” She was emotional after her fourth-round win earlier in the week. Following her 6-3, 6-3 victory over Laura Siegemund on Wednesday, Kvitova blew kisses and basked in the adoration of the small group of fans on Court Philippe Chatrier. It was the scene of her return to competition in 2017, and the moment was not lost on her.

“It means a lot to me,” she said. “In my last match I got a bit emotional when I won. I’m really happy to be in the semifinal after everything. Right now it’s my lucky place. I’m really happy I’m still able to play and compete with the best.”

Kvitova, who fell out of the top 20 and missed almost six months of competition following the 2016 attack, has fought her way back to the top of the game. She has won seven titles since returning and played in the 2019 Australian Open final. Not known for her clay-court prowess, she has yet to drop a set in Paris. She was in control against Siegemund for the entirety of the 80-minute match and has consistently found ways to win with her powerful serve and strong forehand. During a challenging third-round match against Leylah Fernandez, Kvitova trailed 5-1 in the first set then won nine straight games to take the set and the match.

Beloved by fans and her peers, she has been given the WTA’s award for sportsmanship every year since 2013 and is known for her friendly demeanor. Her coach, Jiri Vanek, who has been with her since 2017, reflected on her journey when talking to the media Wednesday.

“After she went [to] the hospital for the surgery [following the attack] she said, ‘Look, guys, I [am] coming back, and I will do everything that is possible to be able to play,'” Vanek said. “Even the doctor was a little bit [skeptical], but she was totally focused she’s coming back, and she will [get] through this. She’s just [a] great player and great person.

“I’m really proud of her. Like especially here. The emotions you can see probably [were] like [what] happened last match. After the match she has all the memories coming back a little bit.”

She will face Kenin in the second match of the day Thursday. Both players are looking to advance to their first final at Roland Garros. It will be their third career meeting, with Kvitova winning both previous matches.

Kenin, 21, hasn’t cruised like Kvitova in her path to the final four. She was pushed to a decider in all of her matches but one in Paris. Despite her slow starts, she hasn’t conceded more than three games in third sets. During Wednesday’s quarterfinal clash against fellow American Danielle Collins, Kenin left nothing to fate, bageling her opponent in the crucial set.

The sport’s suspension couldn’t have come at a more inopportune time for Kenin, who had just won her maiden Slam title in Australia to open the year. Instead of playing the spring hardcourt season in the U.S., she was stuck training alone in Florida. She was uncharacteristically sluggish when the season resumed in August. She lost her first match of the restart at the Western & Southern Open and was handily defeated in straight sets during the fourth round of the US Open by Elise Mertens. In her first and only clay match before arriving in Paris, she was double-bageled by Victoria Azarenka in Rome. She was far from a favorite entering Roland Garros but has found her rhythm as the tournament has progressed.

“I feel like Australia definitely really gave me a big boost. I definitely feel comfortable with the Slams. I feel like I can get deep.”

Now she’s the first American under 22 since Serena Williams in 2003 to reach multiple major semifinals in the same calendar year. She is hoping to become just the fifth American, male or female, to win their first two career Grand Slam titles during the same season, joining Chris Evert, Jimmy Connors, Venus Williams and Jennifer Capriati.

“I see this match as a pick ’em and a 50/50 knockdown drag-out fight that will really depend on who is having the better day in the end,” said Shriver. “Kenin has improved so much from round to round, and this is an ideal time to keep getting better. She’s certainly poised to win her second major title, but I still think this will ultimately be decided by Kvitova’s racket.

“She possesses such power, and I think it will just be too much for Kenin. The slowness and heaviness of the ball really works to Kvitova’s advantage and gives her more control of where her ball is going. But it really could go either way.”

While Kvitova and Kenin are the familiar faces left in the draw and a matchup some might have predicted, given their résumés, Swiatek and Podoroska are the two names that some fans are still struggling to recognize. Both are in the semifinal round for the first time at a major and neither was on anyone’s list of contenders in the star-studded field.

Swiatek, a 19-year-old who completed high school during the break, entered the tournament ranked No. 54 and was coming off of a first-round loss in Rome and a third-round exit at the US Open. She reached the fourth round at Roland Garros in 2019 and was defeated by Halep 6-1, 6-0. She showed just how far her game has progressed by returning the favor with a 6-1, 6-2 dismantling of Halep on Sunday and followed it up with another straight-sets victory over qualifier Martina Trevisan on Tuesday in the quarters. Like Kvitova, she hasn’t lost a set in Paris and has been clinical in her domination of her opponents.

“You can see her athleticism through the television screen,” said Shriver. “She is playing such a special brand of tennis right now. She has been traveling with a sports psychologist, and I think that shows she knows just how important the mental game is. This might sound crazy but in this era of women’s tennis, and just looking at how she’s handled every situation in this tournament, I think she definitely could win the title.”

Having won her doubles match Wednesday with partner Nicole Melichar, she is now the only player remaining in both the singles and doubles draw and could become the first player since Serena Williams at Wimbledon in 2016 to win both titles at the same event.

“It’s amazing for me,” said Swiatek after her doubles victory. “I never would have thought that I’m gonna be in semifinal[s] in singles and doubles, so it’s kind of crazy, because I had to play a match every day. But it’s good for me, because I’m still in the rhythm. Also, doubles really, I think it’s helping my performance in singles also because I’m learning new stuff, and I’ve never had a chance to play doubles with such [an] experienced player.”

Swiatek’s current status is unexpected, but in terms of surprises, nothing compares to the appearance of Podoroska in the semifinals in her second major appearance. Starting the 2020 season ranked at No. 255, she is on a run that even her coach Juan Pablo Guzman called “unbelievable.”

Having spent most of her career playing in ITF events, the 23-year-old has already almost tripled her career prize earnings during her time in Paris and is expected to crack the top 50 in the next rankings for the first time. Needing to qualify to make the main draw, she has now won eight straight matches and upset No. 3 seed Elina Svitolina 6-2, 6-4 in the quarterfinals to become the third woman qualifier to advance to a major semifinal and the first since Alexandra Stevenson at Wimbledon in 1999.

She can now count Argentinian stars Juan Martin del Potro and Gabriela Sabatini among two of her many fans, as both tweeted their support following the victory. When asked if she was pinching herself over how far she had come, she responded earnestly.

She and Swiatek will be first on Court Philippe Chatrier on Thursday. No matter what happens, an unseeded player will be competing Saturday for the Suzanne-Lenglen Cup and attempting to become just the sixth woman in history to win with such a distinction.

In the end, after all of the turmoil and surprises, this is a final four more than worth all of the endless talk about the weather.

“This might be lacking in the star power, but when you dig into the stories, they’re phenomenal,” said Shriver. “It’s been so impressive to watch all of their journeys to the semifinal. It was always going to be a little different this year due to everything that’s happened, but these are four women who seized this opportunity, and whoever ultimately wins will be more than deserving.”