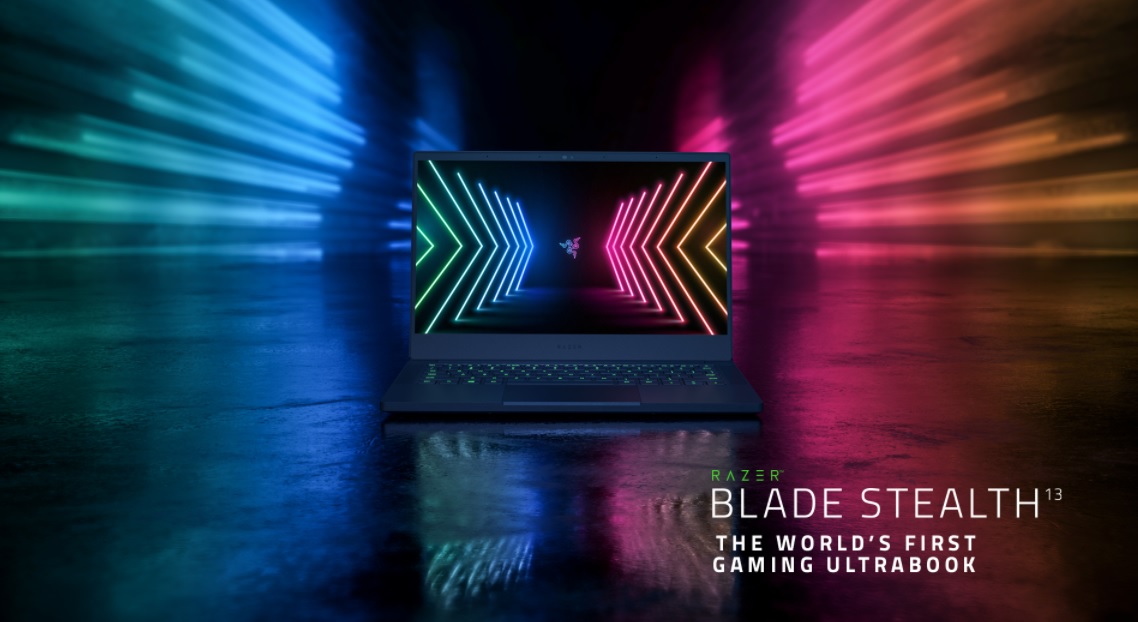 Razer unveiled its fall lineup of gaming products for its base of hardcore gamers, with everything from new laptops to an ergonomic gaming chair.

The company unveiled the new gear at its first annual RazerCon weekend-long event, a virtual festival filmed at the company’s Las Vegas store. The event includes concerts with artists such as Deadmau5, DragonForce and Friends, Sabaton, and Speaker Honey.

More than a million people were watching at the outset of RazerCon as Min-Liang Tan, CEO of Razer, took the stage. He noted that Razer donated more than a million masks during the pandemic, and 75,000 were donated by fans. He said Razer also created a $15 million COVID-19 relief fund, and he also announced that Razer is supporting green product design with its products and packaging. Tan announced a partnership with Conservation International to fund the protection of trees worldwide.

Razer announced the latest version of its Razer Blade Stealth 13 laptop with an “ultrabook” design. It has an 11th Gen Intel Core i7-1165G7 processor running at up to 4.7GHz (base performance of 2.8GHz), a full HD OLED touch display option, and THX Spatial Audio. It has an Nvidia GeForce GTX 1650 Ti graphics chip (the same as the prior model with 4GB GDDR6 memory, which gives it 10% faster graphics performance) and it is 2.7 times better at content creation than the previous version. The display has an option for operating at a 120-hertz refresh rate.

Eugene Kuo, marketing manager at Razer, said in a press briefing that the laptop is the company’s first that combines the OLED screen with the faster refresh rate. It can produce darker images and contrast ratios. The laptop runs at 28 watts. Razer acquired THX, the company started by filmmaker George Lucas, and it is now adding the THX Spatial Audio technology to its peripherals and computers. For gaming, Razer claims the spatial audio gives you a competitive edge as you can hear the direction that enemies are coming from.

The device weighs 3.1 pounds. It has two Type-A USB 3.1 ports, two Thunderbolt 4 (USB-C) ports, a 3.5-millimeter headphone/microphone combo jack. It has wireless AX Wi-Fi 6 wireless networking, a webcam, and Windows Hello to unlock the machine via face recognition. The Razer Blade Stealth 13 will be available this month at $1,800 on Razer.com as well as select retailers this fall. 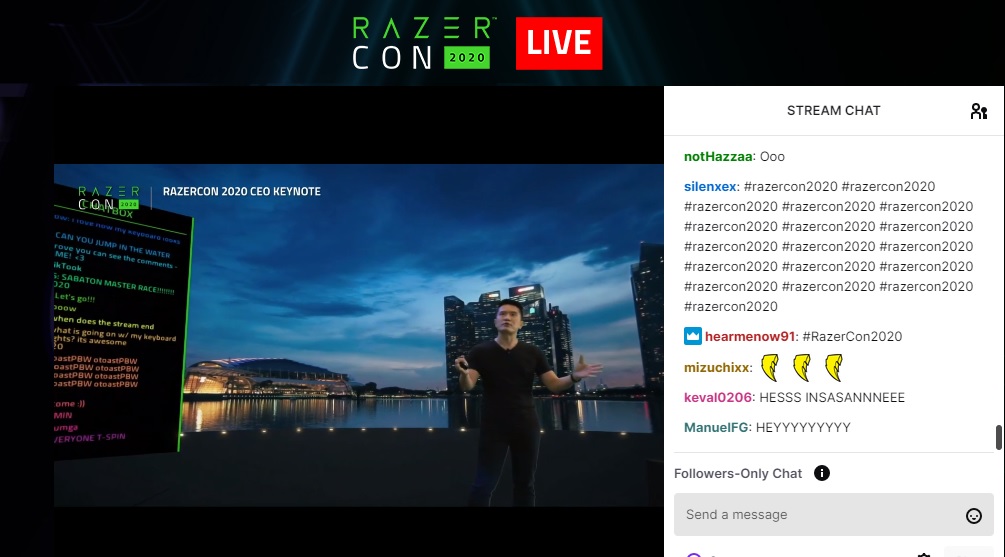 Alongside the new hardware announcements, Razer introduced four new partners to the Razer Chroma Connect program: WD Black, Seagate Gaming, Yeelight, and Twinkly. The Razer Chroma Connect program now consists of over 50 third-party hardware partners, making it the world’s largest RGB lighting ecosystem for gaming devices with support for over 500 devices and over 150 games and applications.

To help natively control the growing list of connectable devices, Razer also announced the Razer Edition motherboards in collaboration with ASRock. The boards are the first to offer native Razer Chroma RGB support and universal compatibility with thousands of addressable RGB (ARGB) components. DIY PC builders with multiple ARGB components can now sync every component with their Razer peripherals with just the Razer Synapse 3 app.

Twinkly is also making Christmas lights that you can light up with Chroma lighting. 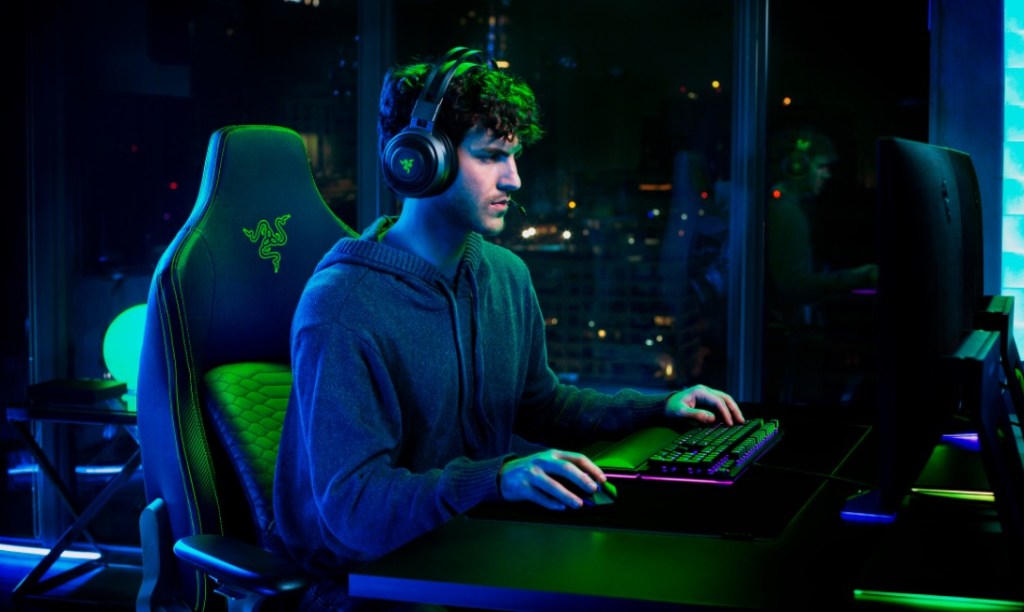 Gaming chairs have been popular during the pandemic. And so Razer also launched its first gaming chair aimed at balancing comfort, health, and style. It has an external lumbar support system, high-density foam cushioning, stylish multi-layered synthetic leather, and more.

The Iskur was designed to address the need for superior ergonomics in today’s gaming chairs, with its unique external lumbar support system that offers 26 degrees of customization, to help improve gamer posture during long gaming sessions.

Razer said the lumbar support system works to reduce aches and strains by supporting the full curvature of the spine, specifically the mid
and lower regions where tension builds up the most.

Tan said he decided to build the chair after he had his own back problems earlier this year, and Razer hired ergonomics experts to create a chair that could give players proper ergonomics like a neutral spine position and proper posture. The cushion density forms a contour based on your weight. It has ergonomic lumbar support, high-density foam cushions, memory foam head cushion, and seat tilt. It can carry up to 300 pounds and users up to six feet two inches tall.

“We built so much science and technology into this chair,” he said. 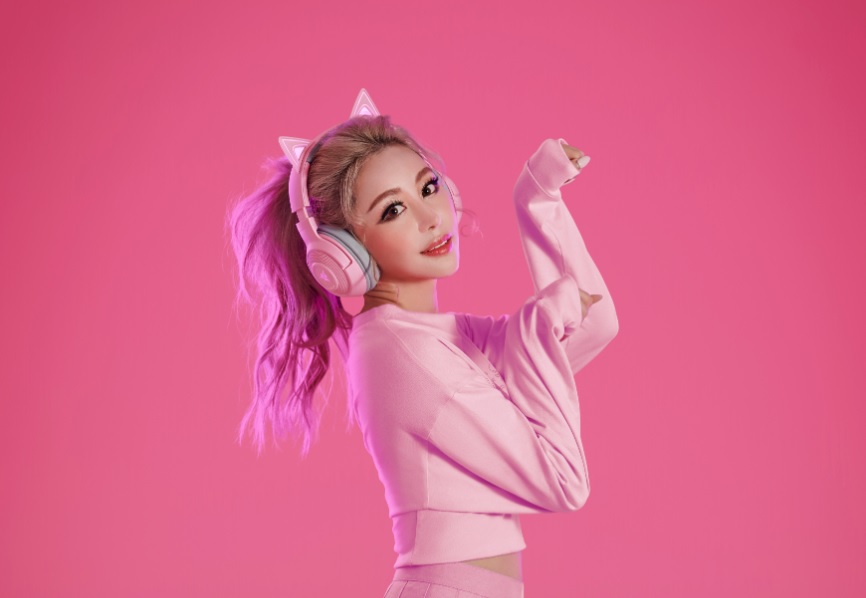 The latest Razer Kraken BT Kitty Edition is a headset with Bluetooth 5.0 connectivity and 40-millimeter drivers. That means you can use this headset with kitty ears in a mobile way, with your smartphone. It has Razer Chroma RGB and up to 50 hours of battery life. The headset also features a built-in microphone with beamforming technology to block out ambient noise and capture the user’s voice more clearly.

The earcups and kitty ears are complete with Razer Chroma RGB, which responds to apps and notifications and can also be customized through the Razer Audio App to compliment any style. Tan said you can set it to any color you like, syncing the lights of the kitty ears and the earcups. It will sell for $100 on Razer’s site. Razer is sponsoring a “#LearntoMeow dance challenge to promote the headset.

“This was designed for you to take outside,” Tan said. 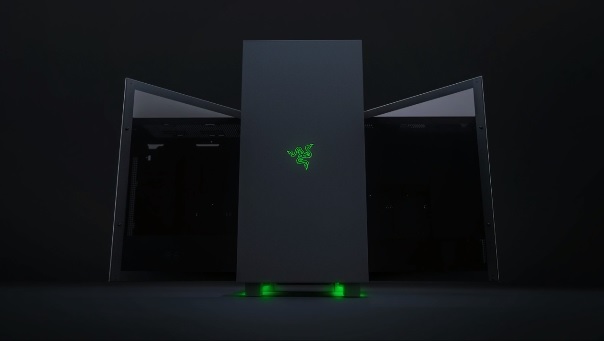 The Razer Tomahawk Gaming Chassis is targeted at desktop PC gaming enthusiasts. It is available in two distinct sizes: The Tomahawk ATX, a standard mid-tower case and the Tomahawk Mini-ITX, a small form factor case. It has full tempered glass side panels to showcase the desktop components on one side and the cable management solution on the other.

The two panels open from a detachable rear hinge that gives builders the ability to quickly build and change the system. The hinges are detachable, and it has optimized airflow with an open-mesh design. It has USB-C and legacy USB-A support.

The chassis features a matte black metal frame and a black front panel. The bottom is lined with Razer Chroma RGB lighting which can be controlled and customized via the Razer Synapse 3 software. It can support up to a 360-millimeter radiator to reduce heat, and up to two 140-millimeter fans. The Razer Tomahawk M1 Gaming Chassis ITX is available now on the Razer site for $180, and the ATX version is available this fall for $200. 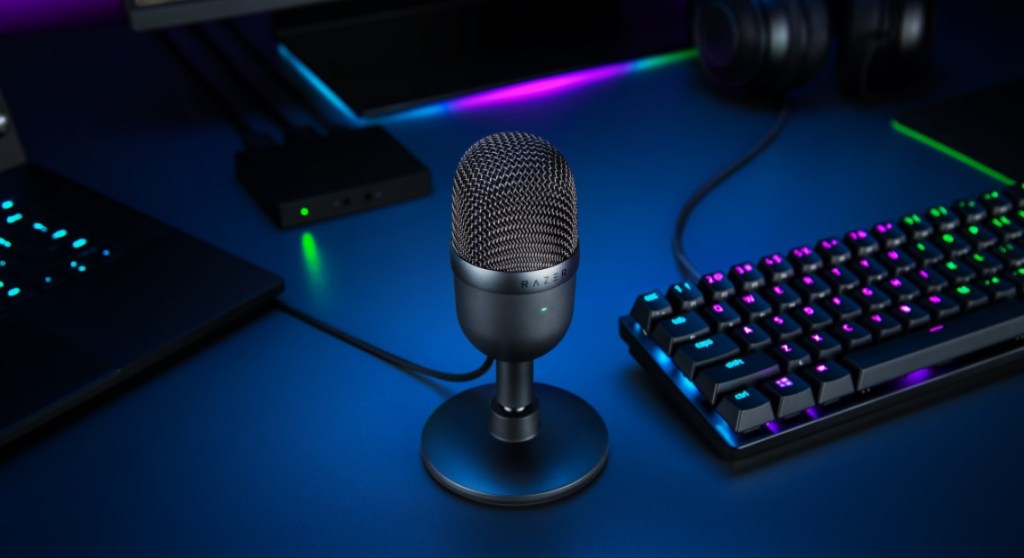 Razer is making a compact desktop microphone dubbed the Razer Seiren Mini, a USB-powered microphone with a supercardioid
pickup pattern that helps reduce unwanted ambient noise, paired with a 14-millimeter condenser capsule to broadcast crisp and accurate sound. It comes with a built-in shock mount to reduce vibrations from outside sources and a heavy tilting sound to maintain stability and positional accuracy. It weighs less than a pound and is six inches tall. It comes in three colors, costs $50, and is available on the Razer site today.

“It’s small but it’s got a mighty set of technical specifications,” Tan said.