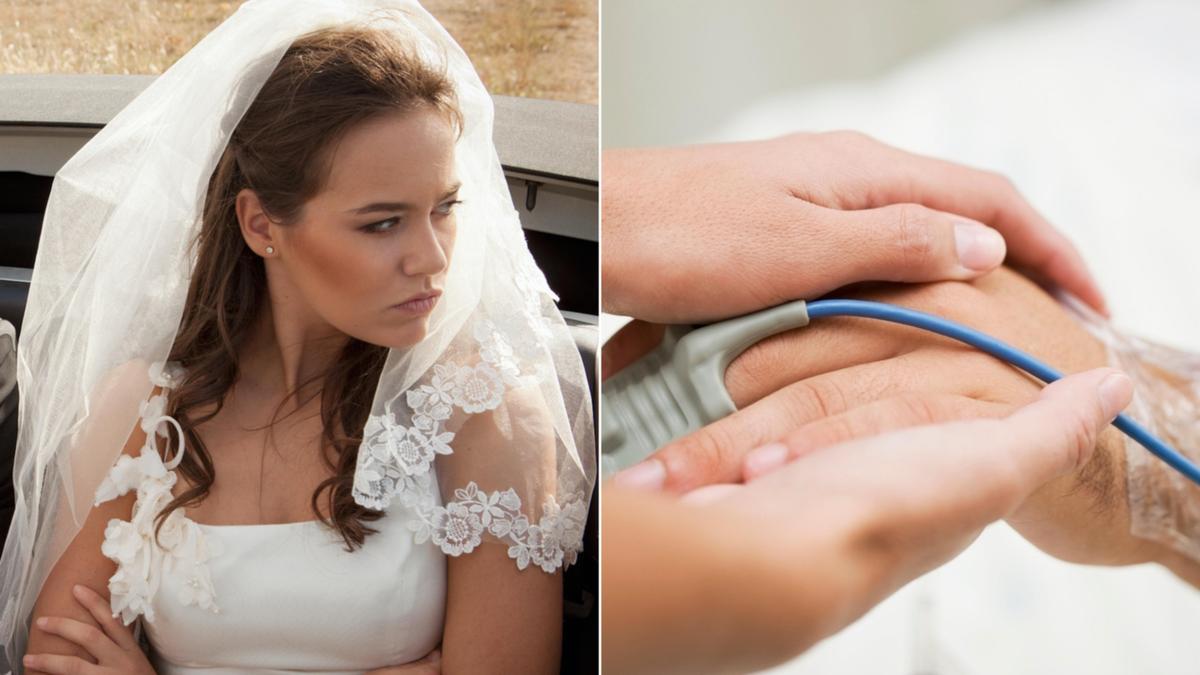 A bride-to-be has come under fire on social media for planning to make a controversial change to her wedding vows.

Sharing on Reddit, the woman said she wanted to remove the vow where she promised to look after her fiancé “in sickness and in health”.

Claiming that she hates “taking care of sick people”, the bride said she wanted to “live my life to the fullest” without being burdened with an ill husband.

For more Weddings related news and videos check out Weddings >>

While she said she has “no problem” with caring for him if he was sick with a cold or flu, she wasn’t prepared to look after him if he had a “chronic” or “severe” illness such as cancer.

She also outrageously said that she would put any of their future children up for adoption if they had a disability, saying “taking care of a disabled child for more than 18 years is too much”.

However the bride justified her stance, explaining that she’d spent a long time looking after her sick parents and wanted a break.

“This is harsh, but I hate taking care of sick people,” she wrote.

“My siblings and I were always taking care of our parents whenever they get sick and I just hate it, I’m sick of it and I hate feeling bound or obligated to take care of somebody.

“My life is full of moments and events like this and I just finally want to live my life to the fullest.

“I’m going to be married soon to my lovely partner and the best guy in the world. I’m so lucky and happy to have him by my side.”

In her post, the bride said her fiancé was unhappy with her request to change her vows.

“We have been thinking a little about our marriage vows,” she said.

“My fiancé is going to have a traditional Christian one: ‘I, _____, take thee, _____, to be my wedded wife, to have and to hold from this day forward, for better, for worse, for richer, for poorer, in sickness and in health, to love and to cherish, till death do us part, according to God’s holy ordinance; and thereto I pledge thee my faith.’

“I’m going to have an identical one but without the ‘in sickness’ part, I’m going to replace it with ‘in happiness’.

“My fiancé says that he will not accept this and he is very mad at me, he is even rethinking the whole thing.

“I just don’t want to feel obligated to take care of anybody sick for years of my own and only life.

“It’s so stressful and I think he is being very unreasonable right now, it’s just a marriage vow and I have the choice to change it.”

In response the extreme backlash, the woman said she was happy to care for her husband if he was suffering from a minor ailment.

“It depends on the disease, obviously – I’m going to have no problems taking care of somebody with a cold or some flu or some broken bones,” she said.

“However, if it’s chronic or severe and requires so much time and playing around (diets, restrictions, surgery risk, special conditions, frequent problems…etc) like Crohn’s disease, ulcerative colitis, disabilities, cancer… etc then no.

“I had enough of those in my life.”

When asked whether she would care for their future children if they had a disability, she responded: “If they are abnormal and the tests detected that, then I honestly would abort them.

“I made this clear to my fiancé before, even though we are both Christians),” she said.

“Otherwise, I would give them up for adoption. Taking care of a disabled child for more than 18 years is too much, almost like the past repeating itself but somehow reversed roles and worse and I just … I just can’t do that.

“Obviously it’s not for all cases. Like, if they got it when they are [age] seven or eight then I’m definitely going to keep taking care of them.

“It will be very unfortunate but as a mother, I would do my best to make their life better.

“At least I would give them the chance for a loving family that is capable of caring for them before getting too attached to me.”

Reddit users were quick to lash out at the bride, suggesting that “perhaps marriage isn’t for her”.

“I feel like the idea of being there for each other is a core part of marriage. It’s not a marriage if you’re not fully in it,” said one.

Added another: “I don’t think I’ve ever seen someone try and sell ‘fairweather commitment’ before quite like this.

“Yes, I’ll love and support you as long as it’s not too inconvenient for me.”

Another added: “I married my husband in the throes of his chronic illness and kept joking it was going to make the vows ‘in mostly sickness, and in health.’

“Some people are wild. Why marry him if you know you’re not going to support them at their worst (health wise)?”

What do McDonald’s french fries look like after 60 years? These young renovators just found out