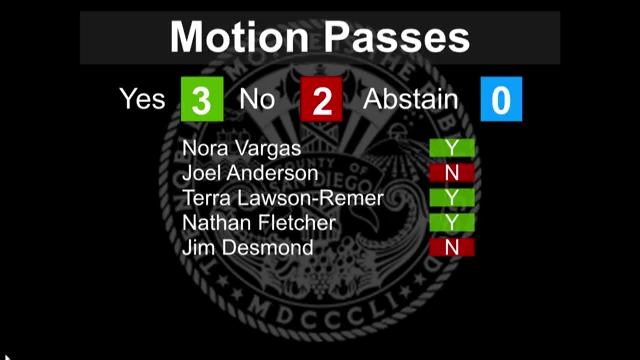 Tuesday’s Agenda Item 34 was “an ordinance to provide for the local implementation of the United Nations Convention on the elimination of all forms of discrimination against women (CEDAW).”

Proponents of the ordinance like Democrat Supervisor Nora Vargas, claim it will protect “women from discrimination.” But opponents correctly point out that San Diego County’s ordinance changes the historical definition of “women” to include biological men.

The ordinance is essentially an effort by Democrats to cement the idea that those who identify as women, are women in the County of San Diego.

The ordinance reads, “there are three primary components to the CEDAW Ordinance presented to the Board. The first is a statement of values and goals to prevent and eliminate discrimination, and to achieve gender equality. Discrimination against women extends to transgender women, gender nonconforming women, youth, and those assigned female at birth, which includes transgender men and intersex communities; and the term ‘discrimination against women’ includes any distinction, exclusion, or restriction on the basis of gender and sex assigned at birth.”

The Board held public hearing on agenda item 34 before the procedural vote, where the overwhelming majority of the public speakers spoke in opposition to the ordinance. Only 40 people spoke in support, while 437 voiced their opposition.

The theme of those who spoke in opposition to the ordinance was that it is an honor to be women, and the idea that men can simply identify as one, is degrading to all women.

Some of the speakers pointed to Lia Thomas, a transwoman, who is dominating women’s swimming at the collegiate level. The speakers explained Thomas is a biological man, and allowing her to dominate the female competition is taking away a chance for biological females to achieve their competitive goals, which they’ve trained their whole lives for.

To no surprise, all three Democrat Supervisors; Nathan Fletcher, Nora Vargas and Terra Lawson-Remer voted in support, while both Republicans; Jim Desmond and Joel Anderson opposed it.

Immigration attorney and frequent KUSI News guest, Esther Valdes Clayton, was one of the many public speakers who spoke in opposition to the ordinance. Her two-minute speech is below:

“Good afternoon. Board of Supervisors, My name is Esther Valdes Clayton, I am a resident of District 3 where Terra Lawson-Remer is now my Supervisor.

I’m a longtime resident of Coronado, where I serve as the President of the Coronado Unified School District. Professionally, though, I’ve had the privilege and the honor of representing immigrant women for over 20 years, in seven states, in federal courts and around the world.

I’m frequently interviewed in BBC, Telemundo, Televisa in Mexico, and just recently in Japan as well.

For my work and advocacy for women and girls. Women and girls are biologically noted and gifted by God, to be exactly what you see in front of you.

For the past two years, we’ve heard from Nathan Fletcher tell us to trust the science. Well, I ask Mr. Fletcher, trust your eyes, trust your science, trust your heart. Because when you see a woman, you know, deep inside what a woman looks like,it looks like me.

It looks like a vulnerable woman who has the equal power to be an intellectual peer to any of you here.

But also, the weakness and the vulnerability to care for the lost and the marginalized. I’m also a Latina, just like you, Miss Nora Vargas.

I was also raised in part in Tijuana, and I want to ask you, how much did they pay you to sell out our culture, our values, our language?

Because I know most of the proponents here, are white women. Three of you, are men.

None of you know what it’s like to be a woman.

None of you know the vulnerability that my clients feel when they are detained escaping sexual abuse from Mexico and then being placed in a detention center, or a facility with the same gender that abused them.

Or escaping their abuser, running to a homeless shelter, or a domestic violence shelter, and then being placed with a man, because no amount of lipstick or a dress is going to make a man look like me.

Tuesday’s complete Board of Supervisors meeting can be seen here.

Some of the San Diego County Supervisors tweeted their support and opposition after the meeting:

Today’s action opens the door, to biological men who identify as women to compete in women’s sports, compete for women’s scholarships, and for unique opportunities that only apply to women. Thereby, taking opportunities from biological women. That in itself is discriminatory. pic.twitter.com/NNAoU1cLF2

I want to protect the rights of women and girls, but I will not support an item that takes opportunities away from them. pic.twitter.com/WIiNYPCIT7

Clayton joined KUSI’s Ginger Jeffries on “Good Evening San Diego” later that night to discuss the details of what motivated her to speak at the Board of Supervisors meeting.