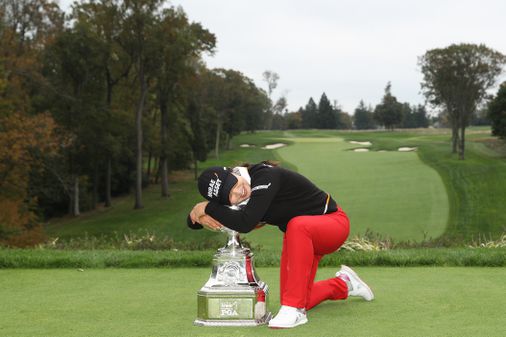 Kim chewed up Aronimink Golf Club in record style, shooting a 7-under-par 63 on Sunday to win the KPMG Women’s PGA Championship. She was five strokes better than runner-up Inbee Park, never seriously challenged on the arduous course in suburban Philadelphia.

“I’m actually really hiding my tears at the moment,” she said, standing next to the trophy.

Her dominance was in plain sight. She finished at 14-under 266. Her final-round 63 tied a tournament record, and her 266 set the championship scoring record.

Kim, who earned her 11th LPGA victory, got the championship push rolling when she matched a tournament record with a 29 on the front nine on Friday. She never really slowed down.

About the only surprise Sunday came when her father appeared on a video chat toward the end of her press conference.

“See you soon,” Kim said with a smile and a wave.

Park, a three-time winner of this championship, shot a 5-under 65. Park won the Women’s PGA Championship in 2015 and Kim was in the first group of people on the course to celebrate with her.

Kim, a 2016 Olympian, was runner-up at the 2015 Women’s PGA Championship and tied for second at the Evian Championship in 2018. Kim held the 54-hole lead at a major once, at the 2015 ANA Inspiration, where she finished in a tie for fourth.

She clinched the championship with a round to remember at Aronimink. Kim’s fifth birdie of the day at the par-3 14th gave her a four-shot lead over Park and put her at 12 under for the championship.

Kim is the latest addition to a growing list of first-time major winners in recent years, a sign of growing parity. Her victory means nine of the last 10 major champions had never won one before. She joins Sophia Popov (Women’s British Open) and Mirim Lee (ANA Inspiration) as this year’s major champions.

Kim dazzled at another event without the roar of the galleries — though Toronto Raptors star Kyle Lowry walked the course — and held off a hard-charging Park. Park had three birdies on the front nine as she tried to match Mickey Wright with a record fourth win at the Women’s PGA Championship.

Kim waved to the crowd and was doused in champagne as she walked off the course.

With Paul Fusco on the bag, Kim matched a tournament record with a 29 on the front nine on Friday and shot a 32 for the front nine on Sunday. Fusco kept it loose, even walking over to compliment a reporter for a story [“really cool”] before Kim teed off on No. 8.

“Before I came to the US, I actually saw Paul, and I saw how he prepared for each tournament, and I told myself I want to have him on my bag,” Kim said.

The money is far less at Aronimink — but the prestige of winning a major means so much more.

The tournament was delayed three months because of the coronavirus pandemic, landing its final round smack on a packed sports Sunday. The PGA of America had to get creative with the tee times with NBC having other programming commitments on the weekend and the leaders — including Kim — teed off at 8:49 a.m.

Champions — Ernie Els birdied the final two holes, running in a 40-footer in the rain on the last, for a 6-under 66 and a one-stroke victory over Colin Montgomerie in the SAS Championship in Cary, N.C.

Els made the long putt on the par-4 18th three weeks after missing a 2-foot putt on the final hole of the Pure Championship at Pebble Beach to finish a stroke out of a playoff.

“It’s a crazy game,” Els said. “A couple of weeks ago I missed a very short putt to get in a playoff and today I make a 40-footer. Figure that one out.”

Jim Furyk missed a chance to become the first player to win his first three PGA Tour Champions events, closing with a 70 to tie for ninth at 8 under — four strokes behind Els. Furyk won at Warwick Hills and Pebble Beach.

Els won for the second time in his first 10 starts on the 50-and-over tour. The South African star, a four-time major champion with 19 PGA Tour titles, finished at 12-under 204 at Prestonwood Country Club. He pointed to putting help from fellow player Mark O’Meara.

“Just by chance I saw him on the putting green the other day and we just started chatting a little bit,” Els said. “He uses the same putter that I use, so we started talking a little bit and I said, `Hey, have a look here.′ I didn’t have a great experience at Pebble obviously a couple weeks ago. He looked at me, and he’s a great putter and knowing a man that long, he gave me a nice assist. He told me what he felt I should do and here I am. So, I owe Mark O’Meara.”

Els tied Montgomerie, playing three groups behind, with the birdie on the par-5 17th and pulled ahead on 18.

“I had 64 in mind,” Els said. “Especially on the final round, the guys, there were so many guys bunched. I was coming from 6 under, I reckoned 14 under was maybe a good score, but then the conditions helped out and it became really tough. So, 66 just squeaked in there.”

Montgomerie, tied for the second-round lead with Darren Clarke and Woody Austin, parred the final four holes — giving himself little chance on 18 when he hit his 190-yard approach 50 feet left. He shot a 70.

European — Tyrrell Hatton held off a final-round challenge by Victor Perez to win the BMW PGA Championship in Virginia Water, England, by four strokes, giving the English player a first victory on home soil at a tournament that inspired him to become a professional.

Hatton shot 5-under 67 to finish on 19-under 269 overall, capping a week when he shot in the 60s every round around Wentworth’s storied West Course.

It is the biggest win of his career, even topping his victory at the Arnold Palmer Invitational at Bay Hill in March that marked his breakthrough in the United States, where he has been playing for the past nine months either side of golf’s hiatus for the coronavirus pandemic.

Hatton used to attend this tournament — the elite event on the European Tour — as a child, and recalled this week the time he came to Wentworth as a 5-year-old with his father and was nearly struck by an errant tee shot from Vijay Singh.

“It’s unbelievable,” said Hatton, who acknowledged in a walkalong TV interview during the round that he was nervous. “This was a goal of mine, to win this tournament in my career.”

Hatton, who has sparked debate this week by wearing a hoodie, came into the final round with a three-stroke lead and was only really challenged by Perez, who moved into a share of the lead with Hatton after an eagle on the par-5 fourth hole.

Bogeys at Nos. 13 and 17 ended the challenge of the Frenchman, who didn’t pick up a shot in his final six holes and shot 68.

Hatton gave Perez a glimpse of an opportunity by bogeying No. 13 — his only dropped shot of the round — but bounced back by making birdie on Nos. 15 and 18 to ultimately ease to the win.

Hatton was unaware of the state of play and almost sent his second shot on the 18th into the water.

“They had turned off the leaderboard on the 18th tee so I did not realize the position I was in,” Hatton said. “I was pretty nervous on the fairway and it’s the worst shot I’ve hit for a long time, probably the worst second shot by a winner in the history of this tournament, and I was very lucky it ended on the fairway.”

It is Hatton’s third victory at a Rolex Series event and he is set to move into the top 10 in the world for the first time.

“Part of me is sad I didn’t get to experience the crowds, but it’s just amazing to win this trophy,” Hatton said. “There are a lot of fantastic players whose names are on the trophy and it’s a huge honor to add my name.

“To be in the top 10 was also a goal of mine and I am delighted they have come in the same week.”