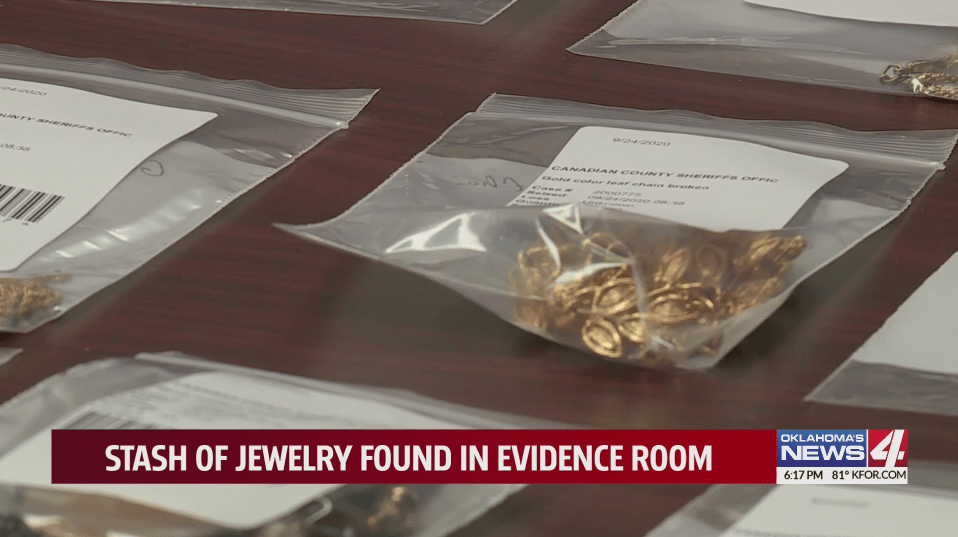 “After a period of time, we’ve got to do something with it and that time is now,” said Lt. Jerry Hendrick with the Canadian County Sheriff’s Office.

Two years ago, Lt. Hendrick took over the evidence and property division for the county.

One of his tasks is organizing the property room and working to return items that were stolen or lost.

“We just find more and more stuff!” he said.

It’s not an easy job, some of it has been around since the 70s.

His most recent venture, finding the owners of 180 pieces of jewelry.

“This over here it looks like it’s all costume, some gold chains, or gold colored chains along with some pearls and things of that nature,” said Lt. Hendrick.

He thinks at least part of the haul came from some sort of burglary because the store tags are still attached.

“I would say this property is probably been around for at least ten years, maybe more,” he said.

Other pieces, he says, were found on the side of the road.

“Obviously, it was taken in a burglary and somebody dumped it out or somebody’s moving and loses it off of their vehicle,” he said.

The items were listed as unclaimed property, so as for where the burglary happened, he says it’s anybody’s guess.

Some of the pieces have distinct characteristics that a previous owner would be able to describe.

Hendrick is hoping someone will hear this and come forward.

“If you’ve ever been the victim of a burglary, you feel like you’ve really been intruded upon. If we could provide a little bit of closure for somebody, I think that’s great,” said Hendrick.

A reminder: these pieces are not major evidence, just property that has been stolen or lost.

If you know anything about this mystery jewelry, call the sheriff’s office at 262-3434.