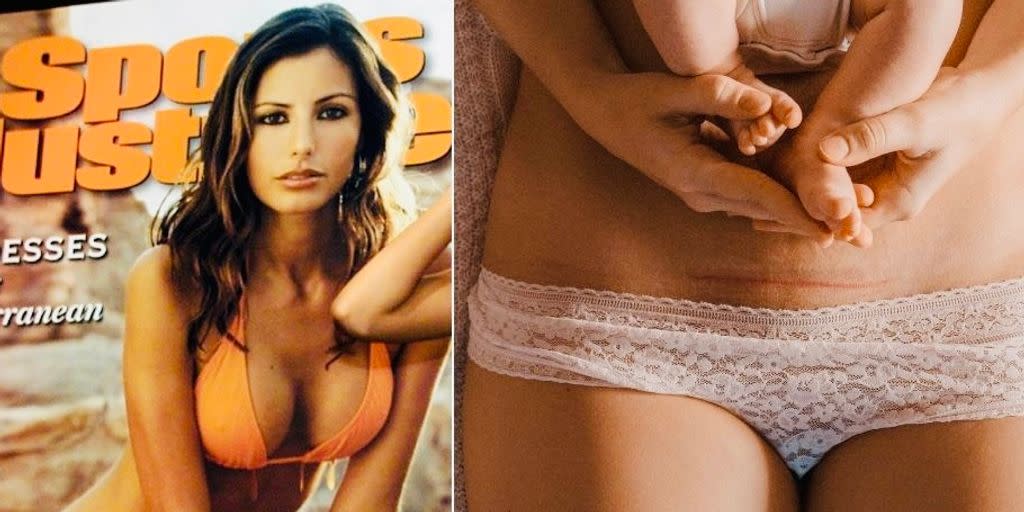 In recent years, Sports Illustrated has made a concerted effort to expand the, shall we say, limited perception of female beauty highlighted in its annual Swimsuit issue.

In SI Swimsuit 2022, model Kelly Hughes flashes a big grin and pulls down her bikini bottoms a smidge to reveal a C-section scar above her pelvic bone.

The photo feature was done in collaboration with pregnancy and postpartum brand Frida Mom, the first brand to partner with Sports Illustrated Swimsuit under its Pay With Change advertising platform.

In a statement, Frida Mom founder Chelsea Hirschhorn said the partnership provides a “valuable platform to disrupt the traditional narrative around women’s bodies — especially those they feature who are mothers.”

In her Instagram post of the photo, Hughes, who delivered her son via cesarean three years ago, shared her complicated feelings about her C-section scar.

“I struggled with insecurities from my scar being that I’m a model and my incredibly difficult recovery but it wasn’t until I embraced my scar that I experienced the true power in it,” she wrote.

According to the latest research from the World Health Organization, births by C-section continue to rise globally, now accounting for more than 1 in 5 (21%) of all childbirths. In the U.S., nearly a third of people who give birth now deliver babies via cesarean section.

Despite how common the procedure is, many people are left with guilt or shame after having a C-section, especially if their intention going in was to have a vaginal delivery.

As Sports Illustrated notes on its site, “the cultural misconception of labeling C-sections as ‘the easy way out’” doesn’t help matters.

Then there’s the body shame many feel about their visible scars, even years later, said Carla Korn, a psychotherapist and body image expert in Westlake Village, California.

“So many women feel uncomfortable about their scars being on display and make attempts to hide them,” she told HuffPost.

Korn thinks seeing a C-section scar in Sports Illustrated “helps send the message to postpartum women that their scar is nothing to be ashamed of.”

In the U.S., nearly a third of people who give birth now deliver babies via cesarean section. (Photo: Jane Khomi via Getty Images)

For male readers coming across the photo, Korn thinks the message conveyed is just as powerful. (Though if they’re familiar with the newer, more inclusive Swimsuit edition ― “Woke Illustrated,” as some have called it ― they probably won’t be too surprised to see it.)

“I think the photo shows that women’s bodies are uniquely capable and magical, especially in how we grow babies and give birth,” she said. “Our bodies’ diversity and perceived imperfections make them even more beautiful.”

Melissa Weinberg, a psychotherapist in private practice who specializes in the treatment of anxiety and obsessive-compulsive disorder, especially during pregnancy and in the postpartum period, loves that the magazine is normalizing postpartum bodies.

Still, she wishes the publication had pushed even further.

“It’s certainly a step in the right direction, but it’s hard to get too excited about photos that completely reinforce every other aspect of unhelpful and unachievable beauty ideals that makes most women, including postpartum women, feel like garbage,” she told HuffPost.

As nice as the photo is, it doesn’t do much to disrupt the norm of “thin white cis blond women” being revered for their beauty, she added.

“Will this be the new standard of how postpartum bodies should look? Will a woman who in most ways looks nothing like this model, aside from their shared C-section scars, feel even worse about her postpartum body in comparison?” she asked.

“These photos are really cool, but not enough,” she added. “We need more diversity and inclusivity.”

“I hope that these photos send the message to anyone viewing them, men included, that C-sections and the marks they leave are unbelievably common and not something to be hidden, but celebrated, something as normal as freckles,” she said. “As a society we want to ignore the details ― glorious and gory ― of such a normal part of the human experience: childbirth.”

On social media, the glossy photo has elicited a range of emotions for women who have had C-sections themselves.

Some are happily surprised to see scars like theirs shown in the pages of Sports Illustrated. Others have noted that their scars aren’t quite as subtle as Hughes’ due to a “classic” vertical incision rather than a side-to-side “bikini cut,” or that they healed weirdly.

Amanda Kammarada, an artist and author who had two C-sections, in 2009 and 2012, was so happy to see the photos featured in a NowThis video, she tweeted it out to her followers.

“It made me feel proud of my scar,” she told HuffPost. “Seeing that kind of representation in that type of magazine is a really big deal.”

If the picture chips away at the stigma associated with C-sections even slightly, Kammarada said she’s happy.

“There are some who say that a C-section isn’t really ‘giving birth,’” she said. “A woman’s body is incredible and there should be no shame in how you have your child.”

This article originally appeared on HuffPost and has been updated.