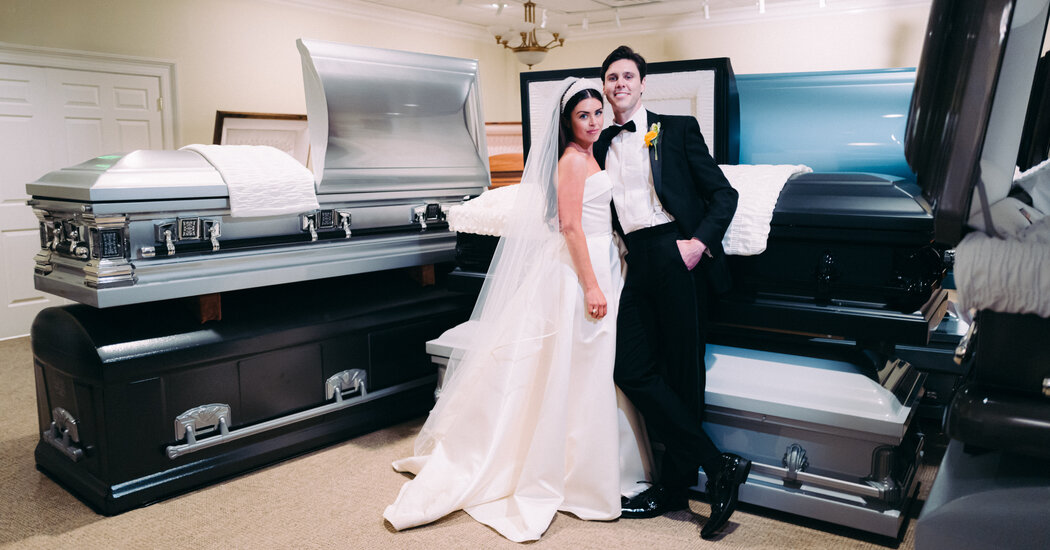 When Hannah Margaret Allen and Grant Joseph Schumacher met for drinks on June 7, 2019, it was his first time going on a date with someone he had met online. Ms. Allen, by her approximation, had done so 50 times by then.

But it was Ms. Allen who instigated their initial conversation on Tinder, just two days after they matched on the dating app. “I’d been through many duds with no luck,” she said, adding that she had “never reached out to anyone, but I’d had a sad Fourth of July and was feeling a little wild.”

Mr. Schumacher was charmed. “I’d matched with a few people on Tinder, but I didn’t feel sure about anyone,” he said.

“I’d just gotten out of a long-term relationship and didn’t know if I was ready to meet someone,” he added. “But I knew she was someone I wanted a drink with.”

From Murfreesboro, Tenn., Ms. Allen, 31, is the executive editor of Mindbodygreen, a health and wellness platform with offices in Dumbo, Brooklyn. She has a soft spot for Southern boys, she said, and gave Mr. Schumacher, a 32-year-old actor from Indianapolis, bonus points for fashioning a bolo tie in one of his profile photos on Tinder.

The day they met for drinks at Covenhoven, a beer garden in Crown Heights, Brooklyn, she gave him more points for wearing cowboy boots on their date.

When they hugged hello, Ms. Allen said the embrace felt “like coming home.”

“It was warm and meaningful,” she added. “I knew he was different.”

Mr. Schumacher felt a similar connection when he held her hand a few hours into their date. “There was an excitement and intensity with her,” he said. “It was like knowing her for years.” When he got home, he told his roommate and brother, who was visiting from Washington, D.C., “I’m going to marry that girl.”

More dates, then a relationship, were immediate. In October 2019, the pair flew to Indianapolis for the film premiere of “Whelm,” which Mr. Schumacher appeared in. While there, Ms. Allen met his extended family. On Halloween, he met hers in Tennessee.

Within a few months of the pandemic’s arrival in March 2020, Mr. Schumacher’s roommates moved out of the city. That July, Ms. Allen moved into his two-bedroom apartment in a townhouse in Cobble Hill, Brooklyn.

On Feb. 13, 2021, Mr. Schumacher, unable to wait until Valentine’s Day, walked into their kitchen, played Otis Redding’s “I’ve Been Loving You Too Long” on his cellphone and asked her to dance. Then he got down on one knee and pulled out a diamond ring.

“I’d thought about marrying her since I met her,” Mr. Schumacher said. “I love waking up next to her and feeling this playfulness, discovery and security. I didn’t want that feeling to stop.”

On May 7 the couple were married at Woodfin Funeral Chapel in Murfreesboro, which is owned by the bride’s mother and has been in her family for five generations. Max Fagan, a Tennessee General Sessions Court judge, officiated at the ceremony before 250 guests.

“This is paying homage to my family and my grandfather who passed away in July 2020,” said the bride, who added that she was leaning into the “’till death do us part.”

“I know it’s weird and unconventional,” she said of their wedding venue. “I don’t need everyone to understand.”

Mr. Schumacher was also unfazed by the location. “There’s a lot of life and energy in funeral homes,” he said, adding that the venue is “a good reminder to do our best with the amount of time we have together.”

Afterward, the newlyweds and their guests made their way to Belle Meadows Farm in nearby Lascassas, Tenn., for a reception. It included a seated dinner at which each of the 25 tables was named after a famous country singer, among them, Willie Nelson, Patsy Cline, Hank Williams and Dolly Parton.

“I can be a lot and emotional; I didn’t know I could find someone who wasn’t afraid of that,” the bride said. “Grant has made those characteristics in me a strength, not a weakness. I love him for that.”

The groom felt similarly. “She allows me to be vulnerable in a way that I’m still learning to let her see,” he said. “I come home and have someone to care about and protect because she does the same for me.”