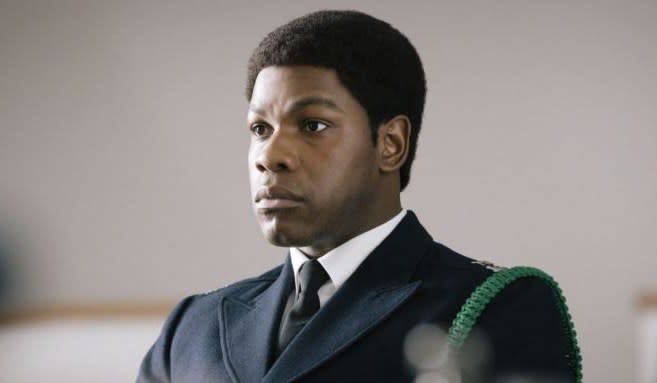 This film overlaps thematically with the previous Small Axe offering, Mangrove, about an outraged restaurant owner who led a protest against police harassment that boiled over into a fight between activists and cops, and a trial for inciting riot that ended with acquittals. That film took place in 1970, but in Red, White and Blue, nothing has changed as we slip into the Eighties. McQueen opens with Logan — a real person — as a schoolboy being stopped and searched by police for no reason, and years later his father Kenneth (Steve Toussaint) gets beaten up by cops, also for no reason. To push for reform, Leroy decides to join the police.

The higher echelons of the department are aware that there is unnecessary tension between the neighborhoods and the bobbies, and they welcome him into the ranks. Leroy’s father is, however, angry and bitter about this betrayal: he’s in the process of trying to put the two cops who thrashed him on trial. Moreover, Leroy is a Ph.D.-holding research scientist and will be dropping several rungs in his father’s estimation by joining the constabulary. Leroy asserts that the only way to change the system is from within and frankly offers to his fellow rookies this remark: “I’m not here to make friends.” In his class of recruits he is a standout, sure to be a success and to mend the frayed bonds of trust between his community and the coppers.

In effect, Red, White and Blue, which is based on a true story, is a remake of Serpico with race rather than corruption creating the dividing line between one idealistic cop and all the others. As Al Pacino’s Frank Serpico did in the Seventies, Boyega’s Leroy finds groups of chattering cops falling silent when he walks into the room, gets left nasty anonymous messages, and learns that the loneliest of men is a cop who calls for backup but finds none forthcoming. McQueen paints a vivid portrait likely to resonate widely in this season of anger with the police, but, as with Mangrove, the film is more of a polemic than a story. At an hour and 20 minutes, it seems to end before its third act. As it is, Red, White and Blue merely reaffirms a depressing reality: When an entire system is sick, no single individual, no matter how brave or well-intentioned, is likely to be able to make much of a difference. Casually racist remarks in break rooms, supervisors who urge Leroy to think of the community he supposedly serves as “a jungle,” and unnecessarily harsh treatment of suspects clarify what Leroy is up against. As we’ve seen in many previous honest-cop movies, the hero must choose a side: Either try to police the police or learn not to raise a fuss at departmental misconduct. If you do the former, you won’t last long as a cop. Moreover, you’re putting your life in danger.

This framing is at odds with the actual life of Leroy Logan, though: Far from finding nothing worthwhile about the police, he remained in their ranks for 30 years, during which time race relations in London improved significantly. This film, however, insists on striking a pose of utter futility that marks it as both biographically inaccurate and unsatisfying as drama. A movie needs to have a direction, and this one doesn’t. You’ll recall that Frank Serpico’s story led to the creation of the Knapp Commission, which proved an important step forward in reducing corruption in the NYPD.

As depicted in this movie, Leroy Logan’s story goes nowhere, though, and at the end McQueen has built up such a sense of hopelessness that he suggests we burn everything down and start over. This is a solution? It feels like mere pandering to the art-house audience of armchair radicals. It’s an unserious proposal from a supposedly serious filmmaker.