Caruth is majoring in motorsports management at Winston-Salem State with a goal of becoming a NASCAR Cup Series driver.

Sunoco announced this year that it would expand its partnership with Rev Racing and became the full-time sponsor of Caruth’s car.

In August, Rev Racing’s owner, Max Siegel, said that Caruth has been good in his development over the last two years.

“He’s been good for

Rajah Caruth, a freshman at Winston-Salem State who is from Washington, D.C., won his first Late Model race on Saturday night at Greenville-Pickens Speedway.

Caruth, 18, and his Rev Racing teammates, all had good nights at the historic track. Gracie Trotter finished fourth and Isabella Robusto finished sixth from the Rev Racing team.

Caruth, who lives in Concord near the Rev Racing shop, does most of his schooling at WSSU on-line. He’s taking a full load of classes as well as putting in 20 hours a week at Rev Racing.

Caruth, who calls Bubba Wallace one of his mentors, got a congratulations from Wallace on Twitter.

Proud of the little bro!!!! @GP_Speedway has always been good to me, got my first win there back in 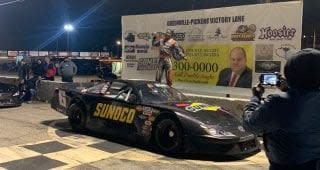 Caruth piloted his No. 6 Sunoco Toyota into Victory Lane for the first time in what has become a rapidly ascending racing career. His Rev Racing teammates Gracie Trotter — who last week became the first female winner in ARCA Racing history — and Isabella Robusto finished fourth and sixth, respectively.

Growing up a NASCAR fan, Caruth developed into an excellent sim racer on iRacing. He’s a product of the eNASCAR Ignite Series — a grassroots youth racing platform that identifies drivers without access to traditional race tracks around the world.

Caruth was selected for the NASCAR Drive for Diversity Youth Driver Development Program in 2019, the first driver from a majority iRacing background to be picked for the program. He was impressive enough to be