Norway is a small automotive market but is widely regarded as the most advanced market for electric vehicles (EVs) in the world thanks to generous government incentives. Battery electric vehicles (BEVs) and hybrids accounted for over 80% of sales in September 2020 and the national parliament has set 2025 as the target year for the country to go fully electric.

This is why electric vehicle data from Norway if often used as an indicator for the prediction which models and manufacturers will excel in a world in which electric vehicles become the norm. There is also no local player, which means the Norwegian EV market is not skewed like some other countries like France where the Renault Zoe reigns supreme.

As I mentioned in my previous SA article on Tesla (TSLA), its Model 3 always performs poorly in Europe during the first month of each quarter, with a big push coming in the third month.

Well, the Model 3 just lost decisively in Norway in September with the Volkswagen ID.3 getting 77% more sales.

The EV market in Norway

According to data from ElbilStatistikk, the top three best–selling EVs during the month of September were ID.3, Model 3, and Polestar 2 with 1,974, 1,116, and 928 units, respectively.

October is starting even better for the ID.3 with 213 units sold so far. The Model 3 has just five, but this is normal as Tesla usually performs poorly in the first month of each quarter as I mentioned.

However, 2020 YTD is also being dominated by another VW model, the Audi E-tron. And the Model 3 will be surpassed by the ID.3 in around three weeks at this pace.

It’s easy to see why the ID.3 is so popular as it’s a very competitive EV in terms of operating costs. German association ADAC put the model ahead of the most popular EVs at the moment in terms of depreciation, fixed costs, and total costs.

And this is not a low-volume car, Volkswagen (OTCPK:OTCPK:VWAGY) can produce 330,000 of these annually from a single factory in Germany. It will also build the ID.3 in China through a partnership with SAIC.

The EV market in Europe

Looking at the European market, data for the first eight months of 2020 shows that Model 3 is still behind Zoe but is gaining ground fast with estimates from EV Sales for around 17,0000 deliveries in September versus around 11,000 for the French model.

Europe has become the most important EV market in the world thanks to generous incentives following COVID-19 and the passenger plugin market grew by 171% in August to more than 97,000 units, which gives it a market share of 11%. 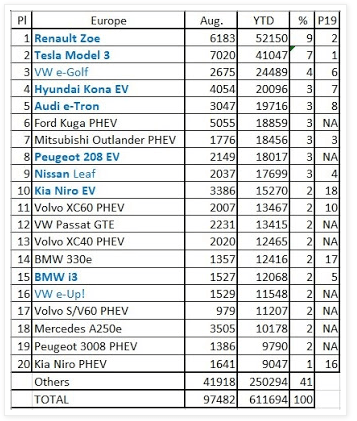 The European EV market has even managed to surpass the Chinese this year. 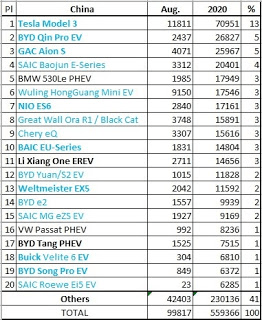 I view hybrids as a wolf in sheep’s clothing since the most stressful load on emissions of air pollution and greenhouse gases occurs during a cold start and hybrids have a lot of those. This means that autocatalysts for them need higher loadings of platinum-group metals (PGMs) to counter this effect. Compared to a conventional vehicle, the PGM loadings in hybrids seem to be around 10% higher.

I see an opportunity here as rhodium is the only viable option to limit nitrogen oxide ((NOx)) pollution in passenger cars and the fundamentals for this metal are already significantly stressed. Due to tightness in the spot market, it recently became the highest priced metal in history at $14,750 per ounce.

According to Heraeus Precious Metals, the deficit in the rhodium market is set to widen to 55,000 oz in 2020 from 20,000 oz in 2019. I think this market is unlikely to become balanced anytime soon as rhodium is a by-product of platinum and palladium mining, which means it’s not sensitive to price changes.

With rhodium prices set to remain high, my exposure is through a London-listed company named Sylvania Platinum (OTC:OTC:SAPLF), which I recently covered here. For all you green investors, it has a minimal carbon footprint as it produces PGMs from chrome mine dumps. For all you value investors, the company is valued at less than 1.5 times EV/EBITDA at the current PGM spot prices.

At the end of February, I wrote a SA article in which I said that Model 3 will face serious competition in Europe during 2020. The brand just lost out in a peak month to the ID.3 in the continent’s most advanced EV market and I see this as a harbinger of what we can expect to see in Europe in 2021.

Regarding Tesla’s valuation I said back then that the company looks overvalued based on key metrics such as price to earnings, price to book value, EV to EBITDA, etc. The share price has rallied by 230% since I wrote that article and I don’t see much change in the fundamentals.

I think it’s dangerous to go short this one, but one thing that seems very likely for the future is that Tesla’s share price will continue to experience significant volatility.

Disclosure: I am/we are long SAPLF. I wrote this article myself, and it expresses my own opinions. I am not receiving compensation for it (other than from Seeking Alpha). I have no business relationship with any company whose stock is mentioned in this article.

Additional disclosure: I am not a financial adviser. All articles are my opinion – they are not suggestions to buy or sell any securities. Perform your own due diligence and consult a financial professional before trading.

Editor’s Note: This article discusses one or more securities that do not trade on a major U.S. exchange. Please be aware of the risks associated with these stocks.