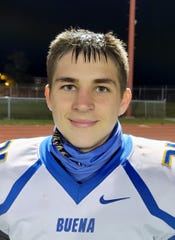 BRIDGETON – After spending 48 minutes on the sideline showing it, Dennis Conti couldn’t stop saying it.

The first-year Buena coach had just seen his team come from behind to open the high school football season with an 18-7 road win over Bridgeton. You can forgive his exuberance after speaking to his team.

Conti came to Buena by way of Wyckoff. Somehow a North Jersey guy found common ground with the Chiefs.

“When we first met him, it was completely new,” Buena quarterback Aretz said. “We were kind of upset because we had a bond without old coach. But coach came in and we started to like him immediately when he introduced himself. We developed a bond quickly. He’s passionate about the game. He knows what he’s talking about.”

In the first-quarter, Buena found itself trailing 7-0 to the host Bulldogs. On fourth and goal, Jermaine Bell fought his way into the end zone on a swing pass from Ricky Mosley.

The way things appeared to be going, the Chiefs were in trouble.

“We were all over the place in the first quarter,” Aretz said. “We started to figure it out. We bonded out there. The defense had a huge stop and then our offense started clicking.”

Midway through the second quarter the Buena defense. Bridgeton was driving and faced another fourth down in Chiefs territory. A 29-yaqrd sack ended the threat and gave Buena the ball. 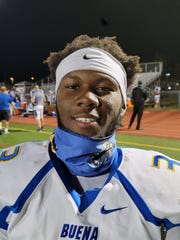 After a big play by the defense, Conti dialed up a potential big play for his offense. Aretz hit receiver Samir Garrison for a 28-yard play action touchdown pass to cut the lead to 7-6.

The Chiefs were almost there, but Bridgeton still had a say.

The Bulldogs took over at the Buena 27 with under a minute to play. Garrison stepped in front of a Bridgeton pass and rolled 82 yards to the 5. With time for one more play, Aretz rolled right, couldn’t find an open receiver and powered his way to the end zone.

Conti stayed aggressive and his team rewarded him with a 12-7 halftime lead.

“We know that no matter what, he’s going to give up a chance to show everything we can do,” Aretz said. “He’s going to let us ball out. It’s great that he shows us the confidence to play the way he knows we can play.”

The Chiefs put the game away midway through the fourth quarter. After establishing the run game with a couple first downs, Conti dipped into the play-action bag again. This time Garrison and Aretz connected for a 45-yard touchdown.

Between them, Garrison and Aretz accounted for all three touchdowns. Aretz even matched Garrison interception for interception, closing out the game with a pick of his own.

The team that left the field winners had no resemblance to the Buena team that played the first quarter.

“We were sloppy,” Conti said. “We were nervous. We have a very young team with just three seniors. We gathered ourselves. We kept our poise. We believed in the system and it worked.”

The Chiefs and their new coach are still getting to know each other. Friday was just a great start.

“When he was just coming in, it took a while to get to know him,” Garrison said. “He had to get to know us. At some point it all started to click. Now look at us. We have our first win together.”

For Bridgeton, a promising start turned sour by game’s end. Fortunately, another game is on the horizon, another chance to keep getting better.

“I’m going to watch this tape tonight as soon as I get home,” Bridgeton coach Steven Lane said. “We take the weekend to think about this one. We will look at our miscues. At the same time, we’ll focus on the things that we did well. Then we’ll plug in the Cumberland tape and try to improve.”

Conti might take a little longer to enjoy this one. As any coach will tell you, there are still things his Chiefs have to work on. For now, he’s just repeating himself.

“I love these kids, love them,” Conti said. “I just got here. I’m from North Jersey, Wyckoff. I’m brand new here. I didn’t know anybody. They just made me a new family.”

Tom Rimback grew up reading the Burlington County Times and Courier Post sports sections and began writing for the BCT in 1996. He has covered everything from Super Bowls and Final Fours to Tri-County Swimming but he’s happiest on a sideline interviewing South Jersey scholastic athletes. Follow him on twitter @RimbackBCT. Email or call him with story ideas at [email protected] or 609 871-8067 and, most importantly, support local journalism with a subscription to the Burlington County Times.