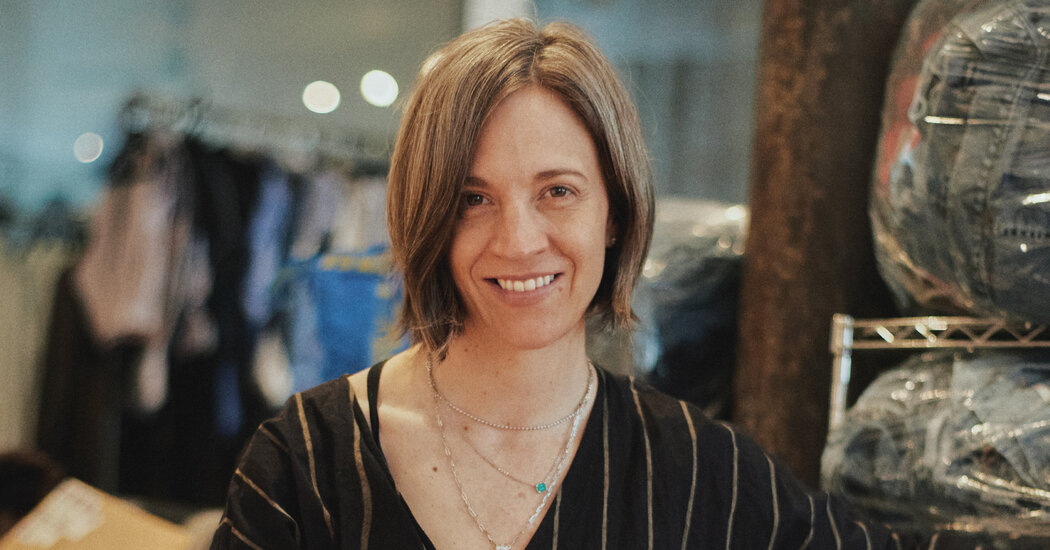 This article is part of a series examining Responsible Fashion, and innovative efforts to address issues facing the fashion industry.

What makes the perfect thrifted T-shirt?

For the designer Erin Beatty, it’s often in the texture — not too stiff nor too soft, and worn enough for the color to be muted but not faded. If there is text or a logo, the more vaguely recognizable the better. She’s just going to chop it up anyway.

A navy shirt that read, “Wilmington Friends Quakers” was just right for Ms. Beatty’s needs on a recent thrifting trip to Urban Jungle, a large store with a little yellow submarine sign out front in the East Williamsburg section of Brooklyn. But she needed more than just one perfect T-shirt.

Ms. Beatty, 43, is the creative director of Rentrayage, an up-and-coming brand she founded in 2019, that takes its name from the French word meaning to mend. Every piece by Rentrayage is upcycled — handcrafted from pre-existing items, including vintage and deadstock materials.

While upcycling has become a more common practice in fashion in recent years, it’s less common to see a brand entirely devoted to it. Ms. Beatty hopes to turn the practice into a long-lasting, viable business — not just an “art project,” she said. “The point of this is: How do we make this really work?” she said.

This has also made Ms. Beatty, essentially, a professional thrifter. In Connecticut, near where she lives with her husband and two children, she frequents the New Milford flea market Elephant’s Trunk. (The market largely deals in home décor; Rentrayage also sells home goods, like colorful recycled glassware.)

Her approach has been met with enthusiasm in the fashion industry: One dress from the brand’s first collection, made from three distinct floral dresses, was selected to be part of “In America: A Lexicon of Fashion,” at the Metropolitan Museum of Art’s Costume Institute. Starting later this year, the line will be carried by retailers including Neiman Marcus and Nordstrom. Ms. Beatty is also working on a collaboration with Madewell to repurpose its old clothing into new designs.

One of Rentrayage’s most popular pieces is a T-shirt made from two pre-owned ones, deconstructed and then sewn together vertically down the middle. The effect is a fashion Frankenstein: two everyday items combined to make something new and more interesting.

“This will look really cool,” Ms. Beatty said after some time of sifting through shirts, sliding metal hangers across metal rack in short screeching bursts.

There was something romantic about the way she regarded the clothes nobody wanted, calling them “beautiful and unique and impossible to recreate.” She had just found a shirt to potentially form the second half of the “Wilmington” tee. Originally white, it had been tie-dyed rudimentarily with a swirl of acid yellow, purple, teal and the occasional brown splotch.

Both T-shirts cost $6. The reconstructed look will be priced around $125, a steep premium, but a price that Ms. Beatty thinks is fair, given all that goes into making the garments: sourcing and cleaning the shirts, determining the look (matching shirts based on color tone, size and feel), cutting and sewing the garment.

“We’re working in New York City and paying fair prices,” Ms. Beatty said, referring to the wages she pays sewers and others.

The final piece will incorporate Rentrayage’s logo, an eight-point star surrounded by squares that forms a kind of geometric orb that looks a bit like the universal symbol for recycling.

Still, Ms. Beatty said, there will be people who see the high-priced shirt and think they can D.I.Y. it for much less. She encourages them to do so. But for those willing to buy the shirt, there’s an emotional value, too.

“It’s symbolic — all of these thoughts and choices have gone into that piece,” she said. “It’s making fashion out of something that’s already existed. It’s saying there’s value in something that’s been discarded.”

The trick of Rentrayage’s aesthetic, which is creative but casual, “pulled together, but not too dressy,” as Ms. Beatty put it, is that its mash-ups require sophisticated construction. The jackets, in particular, are highly technical — “stuff that a consumer can’t make,” said Ms. Beatty, who studied at Parsons School of Design after a stint as a product manager at Gap.

Those jackets, best-sellers for the brand, include a denim jacket given crochet lace tails ($795) and a men’s blazer tailored with bustier panels from an Army green quilted liner ($925).

While Ms. Beatty is best known for her remixed vintage pieces, she has been gradually incorporating more deadstock fabrics into the line, traveling to Italy to buy from the warehouses that work with high-end brands to sell off their excess fabric. A slick quilted floral fabric from Italy, for example, had been turned into a cropped jacket. The fabric’s previous owner? Balenciaga, which had used it for a ruffled dress.

Before Rentrayage, Ms. Beatty spent eight years as the creative director for a brand called Suno, which she co-founded in 2008 with Max Osterweis. It was known as much for its bold prints as for its small-batch production and socially conscious values — at a time when these practices were generally seen more as a bonus than an expectation.

Suno was modestly successful. It was sold by major retailers and worn by celebrities including Michelle Obama and Beyoncé, and released collaborations with Keds and Uniqlo. It was also a finalist in multiple competitions for emerging designers, including the LVMH Prize and the CFDA/Vogue Fashion Fund. But the brand closed in 2016, citing troubles around growth and finding outside investment.

“After Suno closed, I was just consumed with guilt over stuff,” Ms. Beatty said. She had just given birth to her second child and felt overwhelmed by the sheer waste inherent in child-rearing (including, but not limited to, all of that plastic packaging). “I ended up only buying vintage during that time, and always having to change it in order to make it fit right.”

That gave her the idea for Rentrayage: a brand focused on reworked vintage, and on “training the world to re-look at things that have been discarded.” But how big can a line focused on minimizing waste get? “Sometimes I think you kind of have to start things in order to see the path,” she said.

“People just want an answer” as to how they can do better, Ms. Beatty said. “There isn’t one. It’s all about creeping forward in every possible way,” whether that means replacing synthetic dyes with natural ones or finding more environmentally friendly shipping methods.

Her small SoHo studio, where she can afford to employ people only on a freelance basis, is filled with big blue Ikea bags full of freshly laundered vintage clothing ready for their second lives in her next collection.

She wishes Rentrayage had even more access to high-quality deadstock fabric from other big-name brands, which have been criticized for a reluctance to confront waste.

“I have total confidence in being able to make things look cooler that already exist,” she said. “But it’s about finding those things and having access to those things — because what’s happening now is people are so embarrassed by their own waste that they don’t want to acknowledge it.”

“It’s not like we use every ounce of fabric. There are fabrics that we have to sell back off. But in every choice that we make, we just try.”