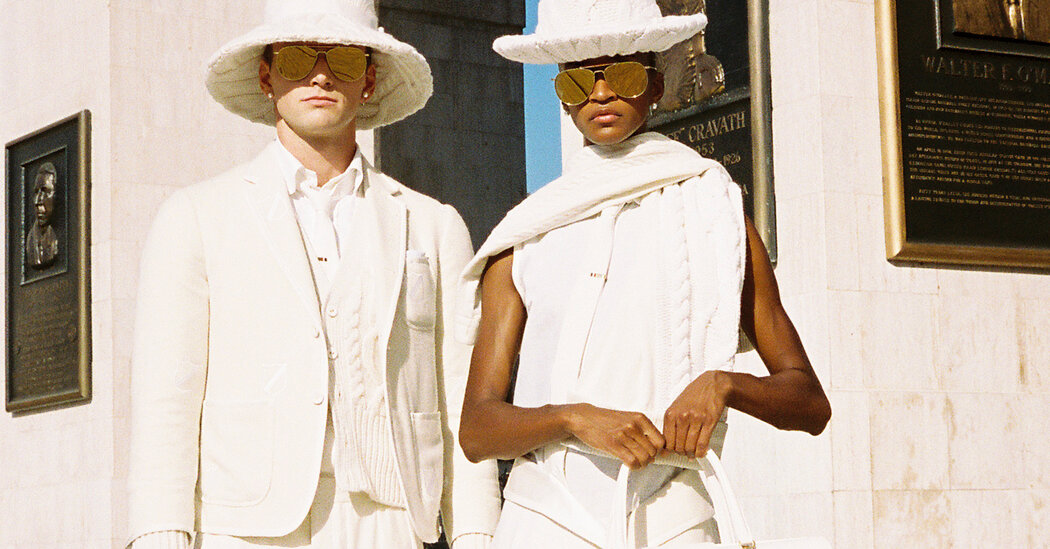 It was the giant floating dachshund spaceship that did it.

It drifted over an expansive Art Deco coliseum — site of the 2132 Lunar Games, an intergalactic extravaganza supposedly taking place 239,000 miles from earth as men and women in 50 shades of intricately worked sporting whites flew the flag of hope — to close Thom Browne’s show.

It was ridiculous and charming at once, as was the scenario, which called to mind all sorts of things (“The Hunger Games,” the 1920s tennis star Suzanne Lenglen, “Chariots of Fire”). So too were the clothes: jackets and long pleated skirts and tops transformed into bottoms and bottoms into tops, all elevated by handwork into something actively precious. It took the postponed Tokyo Olympics and reimagined them not as a symbol of loss and stasis but as a symbol of possibility.

And it crystallized the absurdity of the whole exercise: of holding fashion month in the midst of a pandemic; of pressure by the French government (according to multiple sources) on fashion houses to go ahead as close to usual as possible, the better to support the hard-hit industry, despite the masks and social distancing and security measures put in place.

The glorious human absurdity of it all.

By the time the digital curtain fell on the last of the Paris shows — Maison Margiela’s tour de force of a tango between documentary and dance, the rawness of scrap and the grace of a ruffle-erupting trench or a feathered bias gown — it was clear what was needed right now wasn’t escapism. Even if that’s where we started, back in early September when the New York “shows” began. It wasn’t comfort clothes or ways to hibernate until this is all over. Even if there were a lot of bathrobe coats and bedroom slipper boots.

It was, rather, a plunge into imagination and the instinct toward self-decoration and self-expression that is, in essence, an affirmation. It was a shout into the void that takes fear and doesn’t ignore it, but rather transforms it, uses neurosis and pain as a catalytic converter. Yeah! Bring it on.

Bring on Yohji Yamamoto’s witchy forest crinolines, like something rising from the depths of the darkest fairy tale, and Demna Gvasalia’s Balenciaga models lip syncing to a pounding remix of Corey Hart’s 1980s anthem “I Wear My Sunglasses at Night.”

They did, while slithering through the darkened, desolate streets of Paris in shaggy fur coats with massive shoulders made of shoelaces; in gleaming tank dresses woven from basketball hoop chains; and in enveloping silky track suits, draped in irony like armor and upcycling like couture. Borne forward on Gulliver-size garments free of gender norms (itself a trend, maybe the most ubiquitous of the season).

Whether you want to wear such clothes is almost beside the point; they reek of potential.

Though if you want something to wear …

Still, there have been a lot of very good clothes this Paris Fashion Week — stuff to wear, if you are inclined to get out of your sweatsuit. The buttery leathers and sculptural jersey bodysuits of Nadège Vanhee-Cybulski at Hermès, bridging the Mondrian grid and the Greek amphora. Altuzarra’s offhand crushed balloon silks and Gabriela Hearst’s austere coat and tank dress trimmed in lavish silk tassels, her monochrome columns.

Daniel Roseberry’s reclining-nude print pajama suits at Schiaparelli and Julien Dossena’s terrific mélange of elevated flea market finds at Paco Rabanne, such as one might see at the coolest outdoor cafe of the mind: a rock-star leopard coat, lacy lingerie dresses and some bristling, don’t-touch-me chain mail.

There were also some bad ones, like Virginie Viard’s mall Mom 1980s bouclé bombers, Bazooka pink stonewashed pleated denim and heavy-handed graffiti prints at Chanel. Juxtaposed against the 40-foot-high “Chanel” tricked out in Hollywood lights that served as a set, and the 1930s champagne bubble frocks that swanned out for the finale, the show felt as if it had two different personalities, one Coco, one Karen (also a problem: the fact that of the 70 models in the show, almost all were white, a glaring leap backward in an industry where efforts to address systemic racism have often seemed too little, too late).

And there was a debut. Matthew Williams took the reins at Givenchy with a low-key laying out of totems that will be his building blocks for the brand: a heavy lock, like the locks that bedeck the bridges of Paris to represent eternal love; the exacting shoulders of the Givenchy founder with a triangle sliced out at the seam, the sleeve dropped to the biceps; horn heels from the Alexander McQueen years and some subversive richesse from the Galliano regime.

This meant sheer, diamante-bedecked evening wear over visible stockings, integral cummerbunds with a military aspect, and hundreds of sliced silk ribbons boned into a gown.

It all made sense, in an almost surgical way, but it didn’t quite rise to the level between poetry and preposterous this particular moment demands.

As Miuccia Prada said after her Miu Miu show, “These are polar times. Everything is opposite.” Cue an exhilarating amalgam of ideas and energy that mixed candy-colored jersey with 1970s Danskin and Vitas Gerulaitis stripes, 1960s shapes, chunky paste jewels and swathes of draped taffeta.

If Marie Antoinette wanted to play basketball instead of shepherdess and got Roy Lichtenstein to make the uniforms, this might have been the result. Just looking at the images was energizing.

There has been a lot of talk in the fashion community about missing the shows, but what that really means is missing the sense of connection and sensory input you get from live experience — the same way most of us miss the view of life on the street (which is its own kind of show).

It’s not the running from city to city and collection to collection from 9 a.m. to 9 p.m. that is mourned. It’s gossiping with the person next to you and ogling the inside of some never-before-seen Paris landmark and then seeing some combination of fabric and form that makes you think about identity in a new way.

That’s why at Louis Vuitton, Nicolas Ghesquière held his défilé under the glass dome of La Samaritaine, the 19th-century department store owned by LVMH that has been closed for a 15-year restoration (it was to reopen in April, but because of the pandemic, the doors will remain shut until next year), and made the walls into a green screen.

Those who could be there in person had a special preview of the space, and those watching at home saw the show transposed against scenes from “Wings of Desire,” the 1987 Wim Wenders film about an angel who sacrifices immortality to become human and experience life, with all its pain and joy (and sex!), in color.

As for those colors: They came in the form of bright, skate-inspired slogans splashed across boxy T-shirts and T-shirt dresses, paired with big drop-crotch pants and oversize coats, shapes that were neither classically feminine nor masculine but somewhere still to be explored. They came in jackets that could be cinched close to the body or expanded to swing loose, mixed in with graphic black and white prints that echoed the rush of movement, silver embroidery and the occasional lavishly draped satin puff.

“Vote,” read one message (presumably not referring to the imminent American election, since that will take place before these clothes are sold, but rather to the idea of action). “Bounce,” went another. “Move forward,” a third.

Beam me up, Scotty.