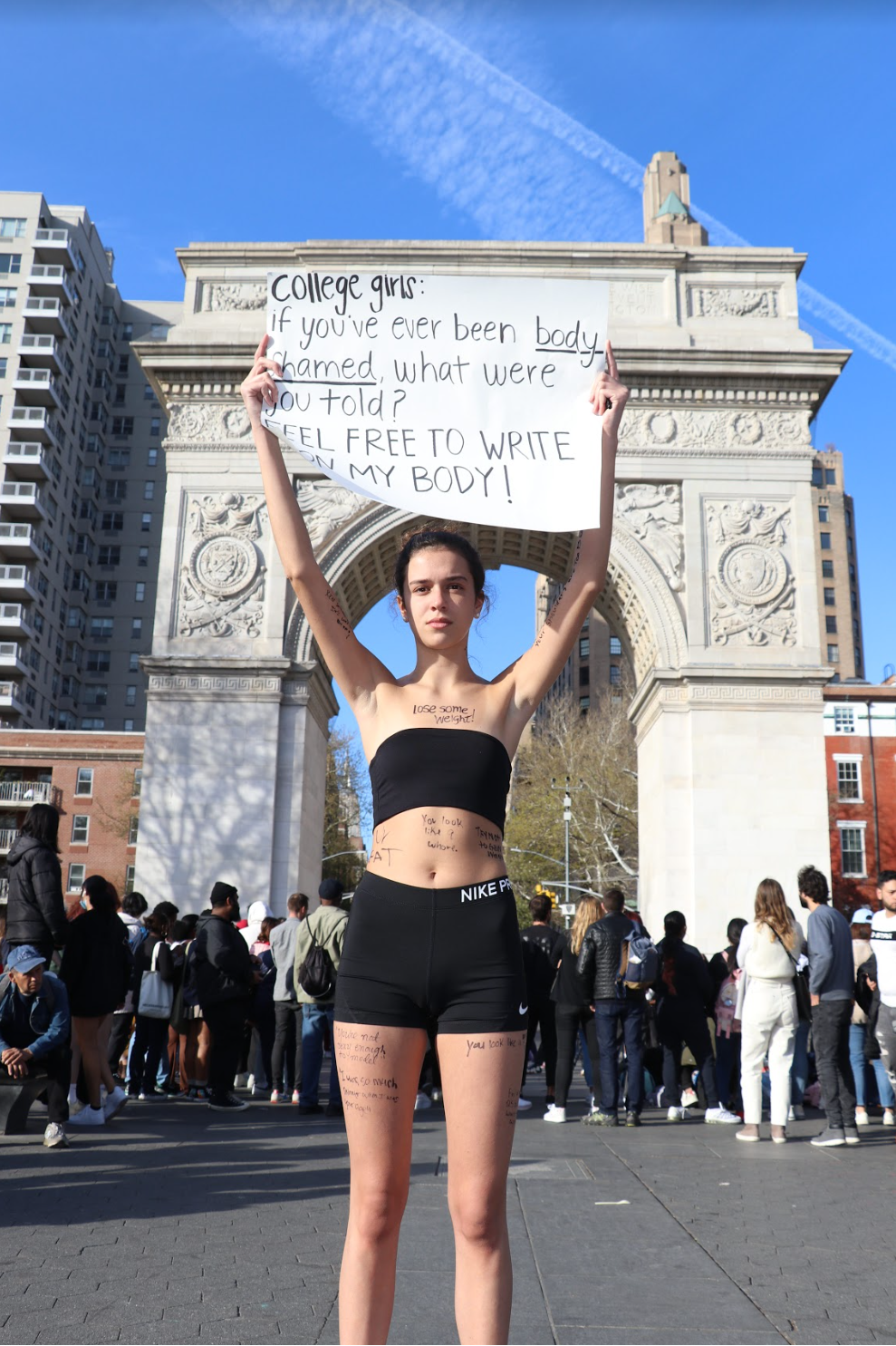 When Parsons School of Design freshman Ainoa Cerdeira Gonzalez was tasked with creating a final project for her Mental Health by Design class, she knew she wanted to create something impactful.

“I started off by working on doing some posters,” Cerdeira Gonzalez tells Yahoo Life. “I was doing different sketches. I was thinking about maybe doing a short film in which I would be like interacting with different people.”

But then, she says she realized,”I just wanted to take it to the next level.” That’s when the interior-design major decided to use her body as the canvas, turning her personal struggles with body shaming into an opportunity to raise awareness about the issue.

“Body shaming is something that is affecting the mental health of many individuals,” says the New York–based student and model. “As it becomes more severe, it can cause anxiety, depression, and eating disorders in those who get judged on their physical appearance, and I personally struggled with body shaming in the past … comments like, ‘Do you eat’ or ‘You’re way too skinny, or ‘You look anorexic,’ ‘You’re as flat as a table.'”

She says she decided to provide a visual representation of the real-world ways in which body shaming can manifest itself.

“I did this sign that said, ‘College girls, if you’ve ever been body shamed, what were you told? Feel free to write it on my body!'” She then held the sign above her head as she stood out in public — in bustling Washington Square Park, to be exact — in shorts and a bandeau top, allowing young women to write the comments onto her skin.

Her project gained further attention on Instagram, where photographer and fashion editor Scott Schuman posted an image of Cerdeira Gonzalez to his 1.1 million followers, drawing both praise and criticism and over 8,600 likes.

At some point during her three hours in the park, she opened up her invitation to young men, as well.

“As I was standing there, this guy came up to me, he was like, ‘You know, we get body-shamed, too,’ and I was like, ‘That’s true,'” she explains. “I did some research, but I was also a little scared of boys writing on my body, but after I heard that comment, I was like, you know what? I might open up this project to like, everyone.”

That’s when she folded down the portion of her poster that said “college girls,” drawing even more responses. “More boys started coming up and writing, so that was very impactful to see that it’s not only the girls,” the student says. “Sometimes, on social media, it seems that it’s just the girls who get body shamed, but in reality, it’s not. It applies to both genders.”

As courageous as the endeavor was, she was admittedly worried about how it would all go down.

“I was very nervous about doing this project, because I didn’t know how people were going to react or if people were actually going to interact with me,” Cerdeira Gonzalez says. She was also wary of putting her insecurities on display in front of a large audience.

“I was like, it’s gonna be very tough to do this, because I struggle with my body image. But at the same time, I was like, it’s going to be so powerful if I let other people express themselves about their bodies on my body. I just wanted to give it more importance, but at the same time, approach it in a different manner in which people could be able to express freely.”

Her reservations were eased as people began to confide in her and write some of the harmful phrases they’d heard. Soon, she says, “This project literally got me in tears.”

Though she is a model, Cerdeira Gonzalez says she struggles with seeing herself in the positive light that others do.

“I was looking through the [social media] comments, and I saw that some people were saying, like, ‘Oh, she’s a model, how can she be portraying feelings of being body shamed?’ and, ‘She’s probably never been body-shamed before,'” she says, stressing that it’s just not the case.

“I was body-shamed by people from my personal life … my family members, closest friends, even my ex-boyfriend,” Cerdeira Gonzalez says, adding that the hurtful words had lingering effects that she is still working through today. “It really affected me in a way in which I feel like I have a very unhealthy relationship with food.”

Now she’s working on a short film about her experience of doing the project.

“There are some clips of girls hugging me and thanking me, and there are others where I’m crying, because it was very emotional,” she says. “I believe that this topic really needs to be addressed.”