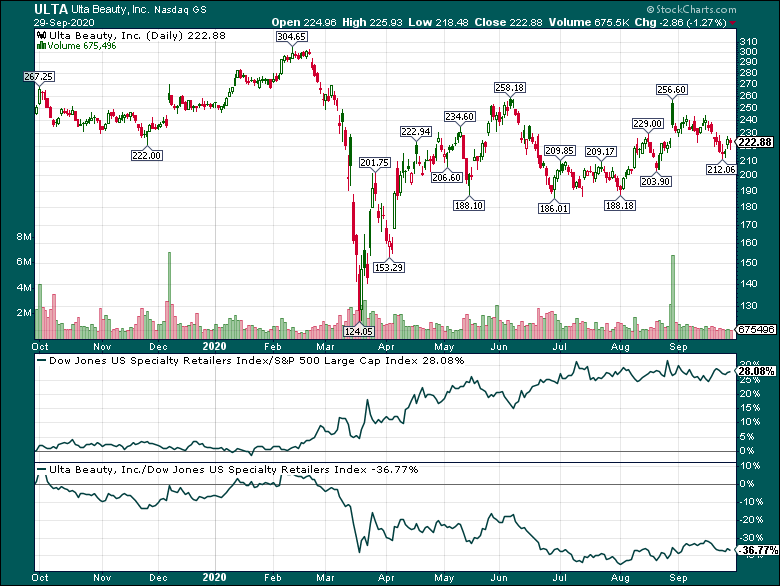 I’ve been a fan of all-things-beauty retailer Ulta Beauty (ULTA) for a long time. That doesn’t mean I’ve always been a fan of the stock, however, as the past several years have produced some truly eye-popping valuations when Ulta is hot. However, this year, the stock has been out of favor, and while it has rallied well off the March lows, it hasn’t yet made a serious run at its former highs. 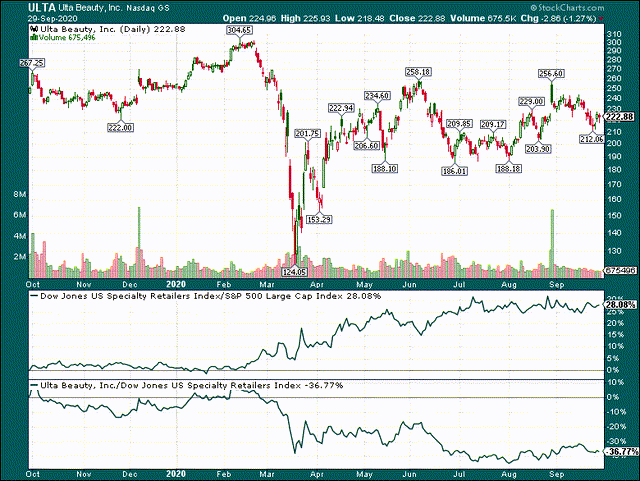 In fact, we can see in the two bottom panels that Ulta is part of the specialty retailers, a group which has pummeled the broader market this year. That group is nearly 30% higher than the S&P 500 in 2020, but Ulta is 37% worse than its peer group in the past year. That sort of underperformance is normally something I run from, because I want to own the best stocks in the best groups. Ulta is in one of the best groups, but it has clearly not been one of the best stocks.

Nearly three months ago, I said Ulta was a buy, and I put a price target on the stock of $267 at the time. Shares traded for $196 at the time, so $267 seemed a bit ambitious, but the stock subsequently rallied to $257 in late August before pulling back again. We’re still ~14% above when I last said I was bullish on Ulta, so the stock has hardly been a disaster.

Still, I think there is some bullish price action above with three consecutive higher relative lows ($188, $204, and $212), and with earnings revisions appearing to have neared a bottom, the narrative should shift to be more bullish as well. In short, I still think Ulta is a buy.

The thing with any consumer-driven stock like Ulta is that the news flow of COVID-19 is going to influence the stock because Ulta needs people to need beauty products. It needs them to go to work, to school, to go out for the night, etc. Without this demand, the company’s revenue base theoretically shrinks. Those are real concerns, and I don’t want to underplay them. However, this company has shown resilience, and more importantly, it has many years of market leadership behind it. Ulta has proven it can and will win in its space, so the ironic thing is that it may come out of this crisis in a better competitive position than it went in. Such is the way with competitive strengths.

Of course, Ulta isn’t perfect. It has margin issues I’ve been frustrated with for years that haven’t improved, and the company is now taking a ~$60 million charge against its failed expansion into Canada. Ulta has long been US-focused, and it appears that will remain the case for some time to come. However, there have been many US retailers that have tried to move into Canada and failed, with examples in recent years including Best Buy (BBY) and Target (TGT). Both of those chains are still leaders in their groups and have proved that an international expansion failure doesn’t mean anything for the long-term viability of the model.

The good news is that Ulta, as I said, should see a tremendous top and bottom line benefit from the economy reopening. Indeed, who doesn’t want to own a piece of earnings that are expected to look like this in the coming years?

Earnings will be pummeled this year due to closures, but Ulta should be right back on its prior trajectory starting next year. This crisis has been painful for the company, but it is more of a speed bump in the road rather than a change of route. Many retailers cannot say that, so it is worth noting.

Further, it looks to me like the negative cycle of downward earnings revisions is slowing, or potentially stopping.

The orange line, which represents the current year, moved down the most, but its slope has flattened significantly. The same is true for the blue line and red line, which represent next year and the year after, respectively. The point is that the stock has been trading weakly because investors didn’t know where the bottom was, but I think we’re either there or very close. Seven months or so into this crisis, what other news could come out that would see these estimates take another leg down?

I previously set my price target by multiplying the then-forward earnings estimate of $11.14 per share times 24, which, as I explained, is quite a conservative multiple for Ulta by its own historical standards. Even so, if we look out a year or so and assume my conservative multiple of 24 times earnings, forward EPS would be $12.28 at that point, implying a price target of $295.

Keep in mind, my bull scenario assumes there is some sort of orderly reopening of the economy, much of which has already occurred in large parts of the country. It also assumes EPS estimates don’t move up at all in the next ~15 months, which I think is unrealistically pessimistic. It also assumes just 24 times earnings, which I think Ulta will move past under a recovery scenario.

The stock is discounting an uncertain recovery scenario, and to be frank, that is what we’re facing. However, if there were no uncertainty, Ulta would still be trading in excess of $300, and you wouldn’t get the chance to buy it at $222. That is what has created what I still very much see as a buying opportunity, and I think Ulta is still a good buy here.

Disclosure: I/we have no positions in any stocks mentioned, but may initiate a long position in ULTA over the next 72 hours. I wrote this article myself, and it expresses my own opinions. I am not receiving compensation for it (other than from Seeking Alpha). I have no business relationship with any company whose stock is mentioned in this article.