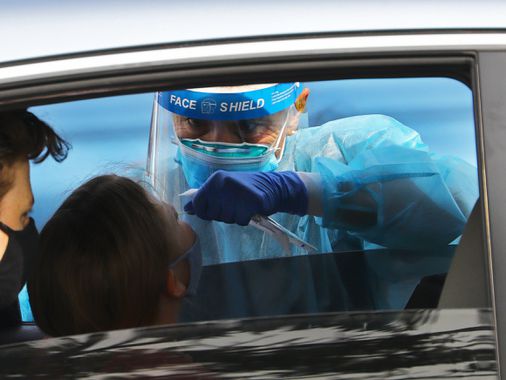 A University of Massachusetts model predicts the state’s coronavirus death toll could rise near 9,800 by Oct. 24.

The model says the state could tally 9,769 coronavirus deaths by that time, though researchers noted the number could range from 9,633 to 9,997.

The rate of deaths reported each day has slowed after a terrifying climb this spring. The model predicts the state will continue to see around 90 coronavirus deaths a week in the coming weeks.

It only creates the forecast for a four-week window ahead because scientists believe forecasts aren’t reliable enough after that.

Researchers from Google who have collaborated with Harvard on a model that looks only two weeks ahead are predicting the death toll will rise to 9,625 by Oct. 11. The UMass model predicts 9,576 by Oct. 10.

The UMass model also predicts that the total number of deaths in the United States from coronavirus will reach 224,955 by Oct. 24.

Looking further into the future, the closely followed model from the Institute for Health Metrics and Evaluation sees much more heartbreak. It has projected that the nation could tally more than 371,000 coronavirus deaths by the end of the year.

The US death tally had reached over 206,000 as of Wednesday morning, according to Johns Hopkins University.

The pandemic’s confirmed death toll worldwide climbed over 1 million this week, according to a count by Johns Hopkins University. The United States accounts for 1 out of 5 deaths worldwide, far more than any other country despite its wealth and medical resources.

Material from Globe wire services was used in this report.

Martin finucane can be reached at [email protected]