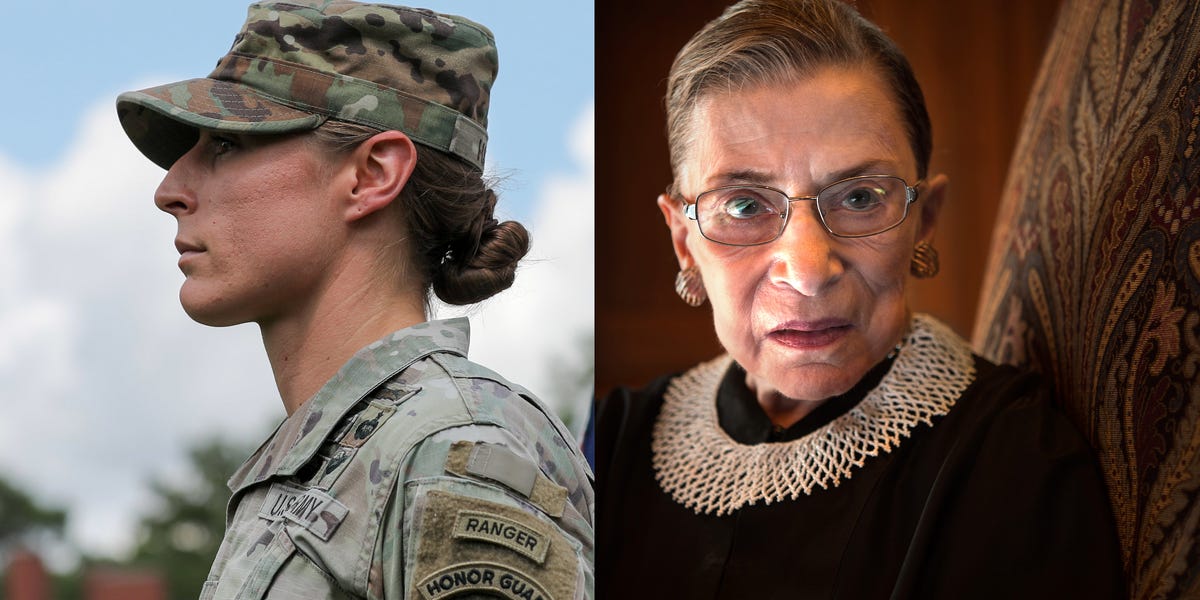 One of the first women to complete the US Army’s Ranger School had the distinct honor of leading Justice Ruth Bader Ginsburg’s lying in state procession at the US Capitol in late September, a ceremony the soldier described as humbling because of its significance.

“I am a huge fan of really strong leaders, and I think that Justice Ginsburg was able to champion a lot of things,” US Army Capt. Shaye Haver, a company commander of 1st Battalion, 3rd Infantry Regiment, told Insider. “I think that anybody can be proud of and inspired by that. It was an honor to be part of such a large-scale operation to honor a person like that.”

Gisburg died at 87 after battling pancreatic cancer and is interred next to her husband’s grave at Arlington National Cemetery. Prior to that, she was given the honor of being carried by a joint casket team, also known as body bearers, represented by all the long-standing military services: two service members from the Army, Marines, and Navy; and one from the Air Force and Coast Guard.

Because the Army is the largest branch in the military, it also provides the officer-in-charge of the procession, who is traditionally selected from one of the four companies within the Army’s ceremonial unit, also known as “The Old Guard.” Each of these company commanders are responsible for different sequences of the procession.

D-Company, also known as “Doghouse Company,” is responsible for the Capitol sequence, in which the casket team receives the remains from the hearse and carries it up the Capitol Rotunda. D-Company’s previous commander led the Capitol sequence for Democratic Rep. John Lewis, who died in July.

The responsibility of the Capitol sequence for Ginsburg’s lying in state rested on the shoulders of Capt. Haver, who first took command of the company in August.

While her duties in the ceremony were happenstance due to her position, Haver volunteered to become a member of the iconic Old Guard.

“A lot of people don’t know that we do funerals in Arlington National Cemetery every single day,” Haver told Insider. “And that’s for veterans, fallen heroes, and for their spouses and dependents as well.”

“Knowing that about this unit, and knowing the level of precision that is required to give excellent honors to those members, is something that I knew that I wanted to be a part of — something that I always strive for personally to ensure that I am giving my best effort at absolutely everything that I do,” she added.

The highly competitive process to become a member of the Old Guard is reflected through their physical requirements, including hoisting a casket and carrying it up the 35 steps of the Capitol Rotunda.

“The most difficult part of the transfer of remains is carrying the casket up the steps,” Haver said. “It’s our biggest risk in the mission, to getting that right.”

Service members are not allowed to look down while walking up and down the steps, and to remain “in our ceremonial composure,” Haver said.

“I was literally looking straight down the road in front of me, walking down those … and knowing that we’re about the step down on the next level of stairs,” Haver added.

While their expectations are high, the Old Guard does not get much opportunity to rehearse with service members from the other branches for a state ceremony. Other than one exercise a year, the body bearers of a joint casket team do not work together until being notified.

“It just highlights how professional and how capable this team is — to be able to be rapidly notified like that — come together and execute such a flawless ceremony,” Haver said.

The parallels between Ginsburg and Haver’s career accomplishments were not lost on observers of the lying in state procession in Washington, D.C.

Ginsburg became a liberal, feminist champion while serving on the Supreme Court for 27 years. During her tenure, Ginsburg led battles in courtrooms to gender equality — even taking up cases involving sex discrimination against men. She also penned the 7-1 majority opinion against Virginia Military Institute’s admission process that barred women from its ranks, arguing “how much good women could do for the institution.”

Ginsburg is the first woman to lie in state at the US Capitol.

Haver became one of the first women to complete the Army’s strenuous Ranger School, which is designed to prepare soldiers for combat patrol operations in difficult terrain. Roughly half of its volunteer-candidates fail the 62-day course.

Women were allowed to volunteer for Ranger School in 2015, upending the decades-long tradition of the all-male fighting force.

“When we’re willing and we do the same things with them every day, that’s what they want to see,” Haver told the Army Times in 2018.

Haver said she understood the significance of her role during Ginsburg’s procession, but suspended those thoughts until after the event.

“For this specifically, in order to … serve my team best, I kind of had to internalize the mission and maybe reflect a little bit afterwards of what it meant to me personally,” Haver said. “But honestly, being a part of the joint team and being able to perform on that day was an amazing experience for me to learn.”

“We know that the service was conducted in a way that Justice Ginsburg herself would have been honored to have received,” Haver added.