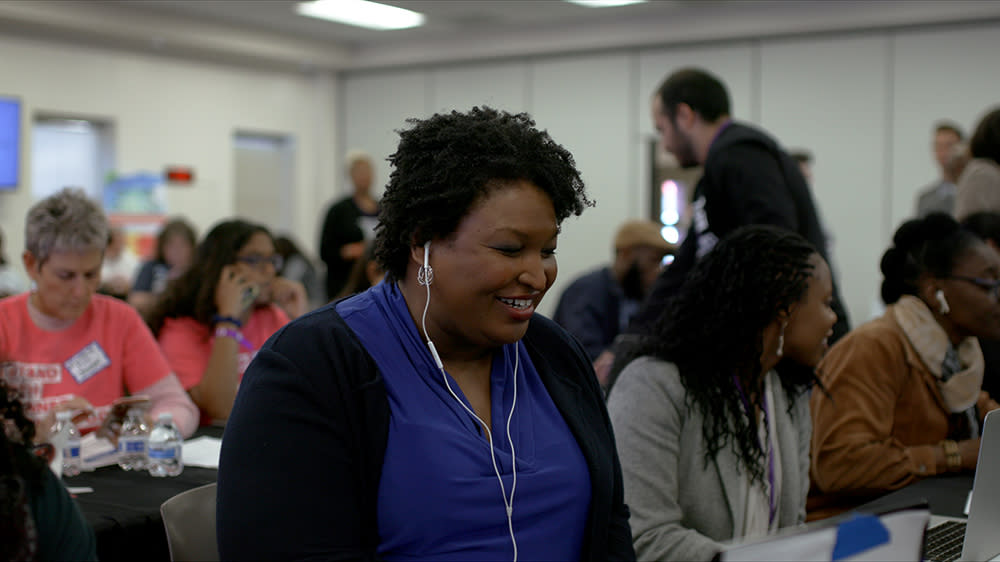 Abrams lost the Georgia election to Brian Kemp amid widespread accusations that Kemp’s campaign had engaged in voter suppression. That’s why she’s getting out the word far and wide about the need for every voter to put some thought into their voting plan, and why she joined Liz Garbus and Lisa Cortes’ documentary “All In: The Fight for Democracy” as a producer. The Amazon Prime Video documentary’s timely message is about fighting voter suppression and making sure every citizen has the right to vote.

Abrams provides a step by step voting guide below and asks that people make a plan and think ahead. As Abrams puts it, “Those who use voting by mail are the people who shop for Christmas in October. And then, some shop on Christmas Eve.”

Allinforvoting.com is a comprehensive website that we built to accompany the film. It gives you all the information you need from the deadlines for registration and the state where you live to the kind of voting you’re allowed to do in your state and the places where you can go and cast your ballot.

WHAT IF YOU’VE TEMPORARILY MOVED TO ANOTHER STATE OR CITY BECAUSE OF THE PANDEMIC?

If you permanently moved to your residency, you have to be registered where you now live. If you are temporarily relocated, you can vote from your permanent residence, but that means you need to use an absentee ballot, which is also known as a vote by mail. They are the exact same thing.

Different states call them different things. Unfortunately, the President has been trying to create this false narrative that one is better than the other. They are the exact same thing.

But either way, you need to double-check and make sure you are registered, where you’re from, or you need to register where you are.

In most states, registration will end in early October. That’s why allinforvoting.com is so important because it will direct you to a website where you can check your registration status. And you can usually check the rules and see what the state says about how you vote.

WHAT IF YOU’VE SAT OUT THE LAST FEW ELECTIONS?

Everyone needs to check their registration. Sadly, in the United States, the right to vote is the only right you can lose if you don’t use it.

There are nine states that by law, remove you from the rolls for not voting in multiple elections. There are 44 states altogether that do some version of it. Double-check and make sure you are registered.

Each state has a different deadline. Most states will let you register online.

WHAT IF I’M A STUDENT, WHERE DO I VOTE?

College students are treated differently because they are considered domiciled where they go to school.

HOW DO I MAKE SENSE OF ALL THE VOTING INFORMATION AND NOISE ABOUT VOTER FRAUD?

Don’t panic: There is a lot of misinformation coming from inside the country and outside. Some folks want you to not vote. Just because we hear something that sounds chaotic or something can be distracting, it doesn’t change the fundamentals, and that is by November 3, if you’re legally eligible, you should cast your ballot.

I encourage every single person to make a plan and learn how all three work, but only do one.

First, plan to vote by mail because voting by mail is the safest. It is the most accessible for millions of people. You can get your ballot, you can do your research, you can take time to answer any questions, and you can return it.

If you’re going to vote by mail, you need to do it early. We know there are challenges with the post office. We know a lot of states will allow you to use a drop box and you can physically drive it to a location so that you don’t have to interact with other people can stay safe.

But we also know that people make mistakes. Those mistakes can mean that your vote gets thrown away. We want people to do it early enough that if one of those mistakes happen, and their absentee ballot doesn’t count, if you do this early enough, you’ll know what happened, you can go to your backup plan.

Those who use voting by mail are the people who shop for Christmas in October. And then, some shop on Christmas Eve. Some states have started in-person early voting up to 45 days before the election. You can find out what date you can start voting on allinforvoting.com.

Voting on election day is like Christmas shopping on Dec. 24. Lines will be longer and more people will be crowding in.

Think of all three options. If you are disabled, displaced or have a language barrier, you are all legally entitled to vote. But for many, they can only vote on Election Day and you want to recognize that because some people simply don’t have a choice.

WHAT IF I’M IN LINE AND THE POLLS ARE CLOSING?

In every state in our country, if you are in line, by the time the polls close, you have the legal right to vote. As a backup plan, 866-OUR-VOTE (866-687-8683). That is a hotline that is managed by thousands of lawyers whose only job in this election season is to help you cast your vote legally and to help you with their problems. You can use that number at any point from now if you have any specific questions or concerns.

WHAT ELSE CAN WE DO?

Sign up to be a poll worker at powerthepoll.org. Each state has different rules. Fairfight.com allows you to sign up to be a volunteer. Fairfight.com is pulling together thousands of volunteers who can phone or text to help voters cast their ballot. We need people who are of good conscience who want to make sure everyone who has the right to vote can cast a vote.

The most important thing everyone can do, whether you’re a voter or not, is to encourage everyone you know who can vote to make a plan to vote. Don’t wait because we don’t want people trying to buy Christmas gifts, midday on Dec. 24. At that point, all bets are off.

And because we have an election season, every day from now on through Nov. 3 every day is Election Day.