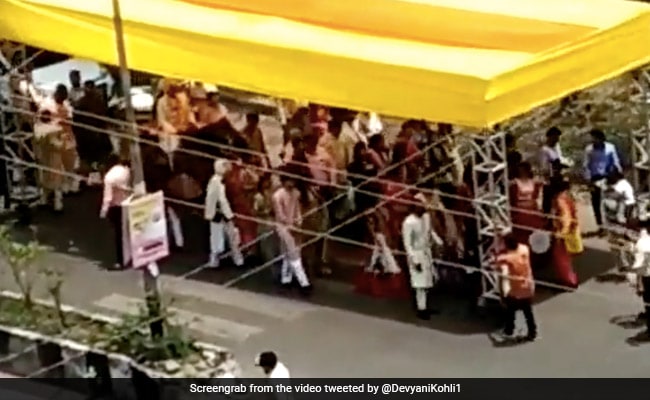 The wedding procession during the high temperature.

Severe heatwave conditions have been reported from several parts of the country. The temperature is touching record highs in Northwest India, with the Indian Meteorological Department (IMD) warning of tough days ahead.

But that hasn’t stopped Indians from celebrating weddings. A video is going viral on social media which shows a wedding procession moving under the shade of a pandal. The groom’s friends and relatives are even dancing to the drum beats, while he is sitting on top of the a horse.

The video has been shared on Twitter by user Devyani Kohli, who has captioned it: “This is why #India is called the land of innovation or simply. ‘Jugaad’ to beat the #Heatwave during ‘Baraat’, Indians have found a solution.” She has not shared the location where the video has been shot.

This is why #India is called land of Innovation or simply
“Jugaad” To beat the #Heatwave during “Baraat” Indians have found solution.#innovationpic.twitter.com/Fs8QociT2K

The video has been viewed more than 18,000 times since being posted on Wednesday.

Several Twitter users are loving the “jugaad” used to take out the wedding procession.

“That means whatever happens don’t leave the road,” said a user. “We are Jugaad king,” commented another.

Others, however, highlighted the risk of taking out a procession in the open. “Very risky they are prone to electrocution from wires,” a user tweeted.

Many users also posted similar videos, showing arrangements made by people to save themselves from the extreme heat. One of the videos showed a wedding procession using four pandals to provide shade to those taking part in the function.

In states like Rajasthan, heatwave-like conditions pushed the temperature at record levels, with Dholpur emerging the hottest with 46.6 degrees Celsius on Thursday. In fact, the mercury has crossed the 45-degree mark at several places.