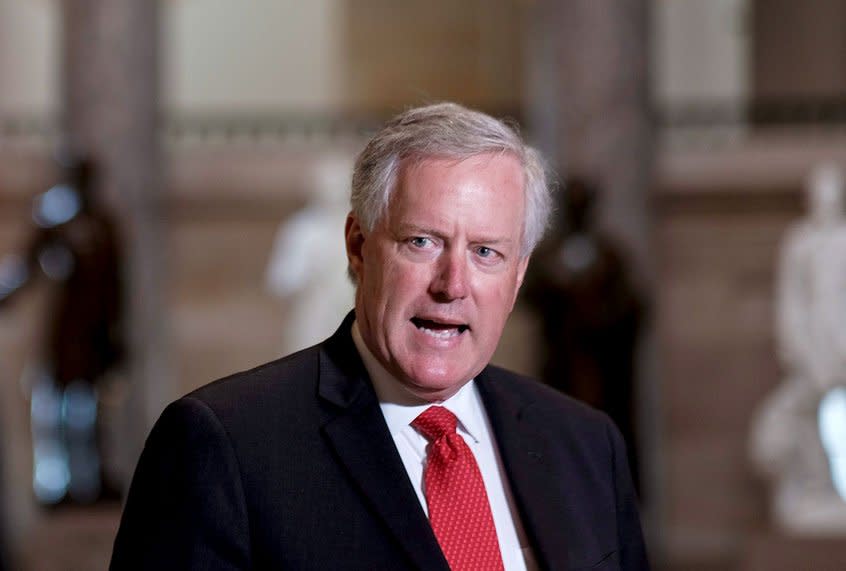 White House Chief of Staff Mark Meadows speaks to the press in Statuary Hall at the Capitol on August 22, 2020 in Washington, DC. Gabriella Demczuk/Getty Images

Throughout the coronavirus pandemic, President Donald Trump and his Republican allies have publicly downplayed the severity of the COVID-19 pandemic and failed to acknowledge the value of social distancing measures. One such Republican is White House Chief of Staff Mark Meadows, who — according to the Atlanta Journal Constitution — hosted a “lavish wedding” in Atlanta in May that violated the city and state’s social distancing guidelines.

Atlanta Mayor Keisha Lance Bottoms, a Democrat, has been an aggressive supporter of social distancing in her city and has had some major disagreements with Georgia’s far-right Republican governor, Brian Kemp, over the coronavirus pandemic — which, according to Johns Hopkins University in Baltimore, has killed more than 1 million people worldwide and over 212,000 people in the United States. Back in May, under Bottoms’ stay-at-home order, gatherings of more than ten people were prohibited in Atlanta — and Georgia had a statewide social distancing order as well at the time. But according to Atlanta Journal Constitution reporters Patricia Murphy and Greg Bluestein, the wedding that Meadows hosted for his daughter had about seven times as many people.

“The wedding took place May 31 at the Biltmore Ballrooms in Midtown Atlanta,” Murphy and Bluestein report. “The 70 or so guests, including U.S. Rep. Jim Jordan of Ohio, donned tuxedos and ball gowns for the indoor affair, but no masks, as Meadows walked his daughter, Haley, down the aisle through a path of soft white flower petals. With crystal chandeliers, marble floors and a frame of soaring Roman arches, the lush scene could have come from any wedding magazine — were it not taking place at the height of a global pandemic.”

“Although the state of Georgia had loosened some restrictions by the end of May,” Murphy and Bluestein explain, “Gov. Brian Kemp’s orders at the time expressly banned gatherings of more than 10 people. The statewide order in effect — which Kemp signed on May 12 — restricted gatherings of more than 10 people so long as they’re not ‘transitory or incidental,’ or spread out across different locations.”

The reporters note that “pictures of the wedding reviewed by the Atlanta Journal-Constitution show groups of people clustered closely together in the same room throughout the evening. Under that emergency order, law enforcement could have potentially written citations to the venue for exceeding the gathering size.”

Five months later, Murphy and Bluestein point out, Meadows is facing “intense criticism” for his leadership during the outbreak of COVID-19 infections plaguing the White House — and for a September 26 ceremony for Judge Amy Coney Barrett, President Donald Trump’s U.S. Supreme Court nominee to replace the late Justice Ruth Bader Ginsburg, which took place in the White House Rose Garden.

“Photographs of the (September 26) event and a private indoor reception show few of the 200 guests wearing face masks or practicing social distancing, which public health experts have long stressed as essential safeguards to contain the illness,” Murphy and Bluestein note.

President Trump is back in the White House after being hospitalized with COVID-19, and other Trump allies who have tested positive for the novel coronavirus range from First Lady Melania Trump to White House Press Secretary Kayleigh McEnany to Trump adviser Kellyanne Conway to Senior Adviser Stephen Miller to Republican National Committee Chair Ronna Romney McDaniel.