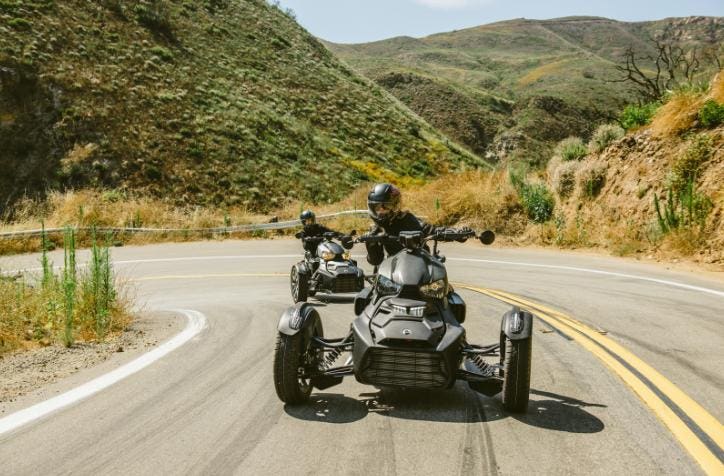 The motorcycle industry is revving up for a sea change as women gain confidence as riders and travelers thumbing the throttle cable of trikes.

The asphalt ribbon at Deals Gap snakes its way through the Tennessee-North Carolina border, skirting the edge of Great Smoky Mountains National Park through 11 miles of harrowing, hairpin turns. For unwary motorists, the short stretch of U.S. Highway 129 can be a nerve-splitting maze. But for bikers, it’s a paradise.

Motorcycle riders have flocked to Deals Gap for decades to test their skills on two wheels. And all of that traffic has earned the place a more familiar nickname— The Dragon. This summer, as Americans flocked to the nation’s highways to stretch their legs amidst a global pandemic, Brittany Morrow found herself drifting around The Dragon on a three-wheeled machine that’s becoming a familiar sight for American road trippers, a Can-Am Ryker.

“It’s what would happen if a go kart and a motorcycle had a baby,” says Morrow, of the three-wheeled motorbike that resembles a snowmobile on wheels. “You still have to lean into the corners, but the back kind of swings around you can break the rear wheel loose a little bit. It’s a thrilling feeling to know I’ve got that back end loose and have no fears of high-siding.”

Morrow is a bonafide badass. Age age 20, she was skinned alive when she was ripped off of the back seat of a speeding sport bike wearing street clothes. The resulting impact saw her skid more than 500 feet down the highway, permanently scaring her body. The recovery process took years, but also stoked a fire inside of Morrow to save others from the same fate, or worse.

When the U.S. military realized more Marines were being killed on motorcycles than in combat in 2008, they initiated a rider training program that Morrow joined in 2012. Seven years after her accident, the New Mexico native was tasked with making sure Uncle Sam’s off-duty troops didn’t wind up smeared on the concrete thanks to a blend of overconfidence and adrenaline. “They’re trying to protect everyone,” Morrow says. “It’s a testament to the importance of rider education.”

For years, Morrow worked with the military to make its motorcycle community a safer, more educated place. The tally of riders who’ve been educated by Morrow likely numbers in the thousands. Mostly, those riders are the kind of all-American men that buy a bike with visions of Tom Cruise streaking down the runway at Miramar in their head. But this summer, Morrow’s audience changed thanks to the three-wheeled beast under her legs in Appalachia.

As America’s borders began to close amidst the pandemic, the machine’s makers, Quebec-based Can-Am, initiated their first ever Women’s Mentorship Program. Can-Am tapped Morrow as an instructor and challenged their community of female riders to log 20,000 socially-distanced miles on the road.

By September, the all-women Ryker riders had logged more than 100,000 miles.

In the process, they began breaking down the doors of a motorcycle community that has been dominated by men since its inception.

According to 2018 figures from the Motorcycle Industry Council, just 19% of the more than 30 million riders nationwide are women. But among current Ryker riders, a whopping 36% of owners are female. Can-Am says they expect those numbers to rise above 40% in the future, thanks in large part to the mentorship program Morrow is helping to lead. The rise in female ridership, they say, is partially due to the shortened learning curve, greater safety and increased freedom that life on three wheels is providing for beginners.

On an August day 740 miles from Morrow’s Albuquerque base, adventure traveler Natalie Galardi found herself in the parking lot of Josie’s Hideout, a legendary California biker bar on the edge of the Colorado Desert. In between skydiving, snowboarding and rock climbing treks, Galardi can be found barreling down backroads on anything with two—or three—wheels. She’s worked with Harley-Davidson to help more women get motorcycle licenses; and she’s steered a Ryker globally, from Malibu to Johannesburg.

“I always get a bike when I travel,” says Galardi. “There’s no better way to sight see than on a Ryker or a bike.”

At Josie’s Hideout, as Galardi mingled with biker couples meandering between Los Angeles, San Diego and the Salton Sea, her machine began to draw a crowd. Most of the seasoned road warriors on hand were curious of the oblong machine that looks like an inverted tricycle stolen from the set of “Mad Max.”

“There were a few sets of couples there,” says Galardi. “They went out to see the Ryker, and they were skeptical at first.”

Galardi told the women to have a seat behind the handlebars. That’s when she says their eyes truly opened up. “These women sat down and were like, ‘oh my God! I don’t have to be on the back with a dude anymore.’ They said, ‘This is rad.’ Then, two of them went out and bought one.”

At Josie’s Hideout, Galardi saw first-hand the quick confidence her machine was able to instill, a confidence that she hopes will encourage more women to break out from the back seat and take the throttle themselves. To that end, she not only communicates with women riders through the movement’s 6,000-member Facebook group; but also takes beginners out into the wild on introductory rides and adventures. And she has seen shy people completely open up behind the reins of a Ryker, gaining confidence before her eyes.

“We did a ride from L.A. to Malibu through the hills,” Galardi describes. “One girl was actually petrified of all things, but she wanted to be a part of our program. During the ride, I watched her go from absolutely petrified to just exuding confidence. I could see how happy she was. She was fist-pumping in the back.

“It just wows me. It’s a remarkable thing to watch these women kind of find their confidence. That’s why it is so important for women to get out there and ride. It’s a confidence that you can’t get anywhere else—not from Instagram posts or Facebook comments or any guy.”

Can-Am can be credited with popularizing the adoption of the modern trike design when it launched the Ryker’s big sister, the Can-Am Spyder, in 2007. In the years since its launch, the company has delivered more than 100,000 Spyders. But are the people riding these machines really bikers?

“A rider is a rider,” says Motorcycle Industry Council Director of Communications Andria Yu. “As far as I know, motorcyclists have always been receptive to three-wheel products. Some folks, who may have certain handicaps or medical issues, may need to use a three wheeler because they can’t shift with their foot, or have an issue with their clutch hand, or can’t put both feet down while stopped. Three-wheelers really help open up access to many more people.”

Indeed, legal operation of a Spyder or Ryker requires a motorcycle license in most states.

As recently as 2009, just one in ten licensed riders was female. In order to change that, the Can-Am Women’s Mentorship Program partnered with 150 North American riding schools this year to supplement the company’s existing Can-Am Rider Education Program. The schools, in turn, offered a discount for any woman that wanted to learn how to ride.

The result, according to Morrow, was an influx of female trainees. 60% of all program participants so far this year have been women.

“It’s power in numbers,” says Galardi. “When we see other women doing stuff as a group, it motivates us all. It’s not just a solo mission anymore.”

“These women have taken the reins,” adds Morrow. “They want to build different bikes with different colors, wraps, lights and performance parts. Once you take ownership of a vehicle, it’s an outward expression of who you are. It’s cool to see women feeling empowered to make decisions on their own vehicles.”

Both mentors feel those decisions are already manifesting on the bustling ribbons of asphalt around America. Female riders are becoming a more familiar sight from the arid plateaus of the Colorado Desert to the foggy coasts of the Pacific Northwest and the dew-covered forests overlooking Deals Gap.

In the wake of their successful launch, Can-Am is stepping up funding for the Women’s Mentorship Program from $20,000 to $100,000. And whether they are on two wheels or three, the influx of female riders feels like a wave of momentum that can’t be stopped.