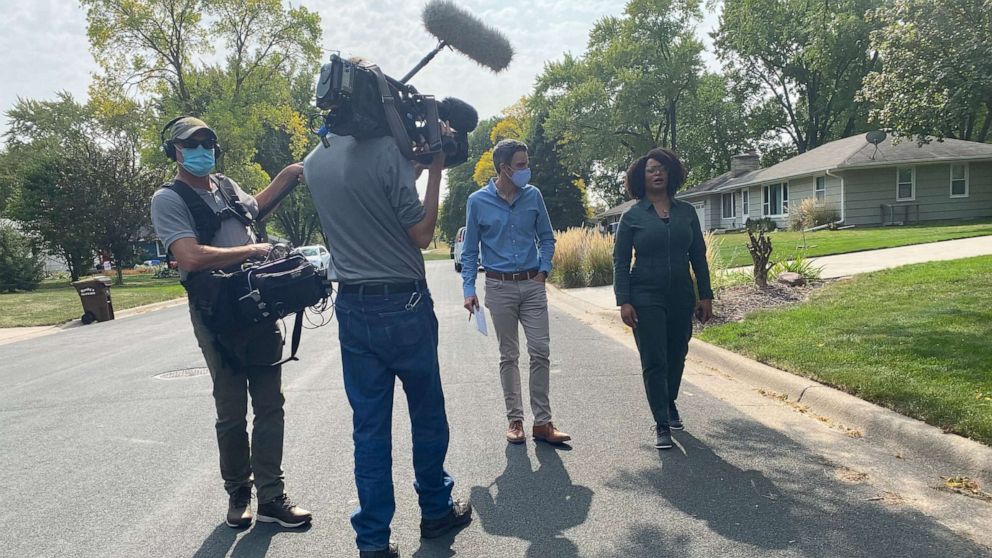 BLOOMINGTON, Minn. — When President Donald Trump and former Vice President Joe Biden share a debate stage for the first time Tuesday night, a key audience for both candidates will be suburban women voters in a handful of critical election battlegrounds.

ABC News Live recently met with five women voters from diverse backgrounds and political views in the suburbs around Minneapolis to discuss the 2020 campaign and issues important to mothers, young female professionals and retirees across the state.

They described anxiety over a year of cascading crises for their families, from the pandemic and recession, to protests for racial justice, a spike in violent crime and looting and a sudden vacancy on the U.S. Supreme Court.

“I was kind of just like, oh, crap. You know, like, what’s next?” said Michelle Fazi, a realtor and mother of three in Chanhassen, after Justice Ruth Bader Ginsburg’s death. “It’s 2020. What crisis is coming down the pipeline?”

The confluence of events, and long-running demographic trends, have scrambled Minnesota politics in the 2020 election and injected new uncertainty into the role suburban women may play in a close outcome.

Minnesota hasn’t backed a Republican for president since 1972, the longest running blue streak of any state in the country. Analysts say the state is up for grabs this year.

“Suburban areas, despite the fact that they are increasingly diverse and there’s a lot of different types of voters in them, they’re really critical — especially women,” said Kathryn Pearson, a political science professor at the University of Minnesota who has closely studied the state’s electorate for years.

All the women who spoke with ABC News expressed unease about the ability of America’s political leaders to restore unity and bring healing at such a divisive time in the country. And, all said they made up their minds long ago about whether Trump deserves a second term.

“I know it’s not Donald Trump. I don’t think it’s Joe Biden. And I’m wondering if there’s other people like myself in that same situation,” said Anne Swenson of Bloomington, a retired CPA and Catholic stepmother of three, who is still undecided about who she’ll pick for president.

“It’s a tough year for me this year,” said Swenson, a self-described fiscal conservative and social moderate.

Racial unrest emanating from Minneapolis and into the suburbs after the death of George Floyd while in police custody has added a dimension of complexity to the state’s politics and underscored that its 10 electoral votes are in play.

Dawn Le lived five blocks from where Floyd was killed in late May. After weeks of violence and looting outside her house, she moved from south Minneapolis to the suburbs where she says she felt safer.

And after years of voting for Democrats, she says she’s now voting for Trump.

“I feel like our leadership did not step up to the plate, honestly,” Le said in an interview outside her old home.

“I think there are some things that Donald Trump and the (Republican) Party really need to address and work on as well, but I feel with this, with everything that happened, that the blue (Democratic) party may make it a little worse,” she said.

The Trump campaign sees Minnesota as its best shot at flipping a blue state to red in November, after narrowly losing the state by just 45,000 votes four years ago.

They’ve spent millions in TV ads, appealing to suburban voters’ fears about looting and violence. Trump and Vice President Mike Pence have made several recent campaign stops in the state with promises of “law and order.”

The latest ABC News/Washington Post poll in Minnesota found Joe Biden opening a double-digit lead over Trump among likely voters. Minnesotans said they trust Biden over Trump by 11 points on issues of crime and safety and by 24 points on ensuring equal treatment for racial groups.

Jamie Becker-Finn, a Democratic state representative, attorney and mother of two from the suburb of Roseville, said the Republican messaging appears to have backfired.

“We are sick of men like Donald Trump telling us how we feel. You know, we have voices. We are full human beings who can share how we actually feel about things,” she said.

Last month, Becker-Finn, used Twitter to push back on a state Republican leader’s claims that women like her are “scared to death” of the protests for racial justice. Her hashtag “#IAmASuburbanMom” went viral.

“People are afraid, but they’re afraid of their neighbors getting sick (from the coronavirus),” said Becker-Finn. “That’s where the anxiety is. There isn’t this sort of top of mind thing where we’re, like, afraid to go for walks or like be in our communities.”

Twila Dang, an African American mother of three who owns a digital media network of podcasters that caters to young women, said it’s unlikely that the movement for racial justice that gripped her mostly white, Republican neighborhood in Bloomington changed voters’ minds on either side.

“It felt like the energy around it was more difficult for us than the actual actions themselves. Those actions did not collectively spread down this far that way,” she said of the unrest. “Facebook is on fire. But I would say neighbor to neighbor, person to person … people don’t talk a lot about that.”

For many suburban voters, the economy and family finances are paramount. And on those issues, Biden and Trump poll neck and neck, according to the ABC News/Washington Post poll.

“My focus is more immediate on what administration that I think can best pull us out of this crisis the fastest,” said Fazi, who described herself as a Reagan Republican.

She said public health restrictions imposed by authorities during the pandemic and their adverse impact on local businesses worry her more than the virus itself.

“I don’t like this being a federal mandate,” she said of government requirements to wear facial coverings. “This is an enormous country, and I just don’t believe that what’s right or necessary in the city of New York is necessarily necessary in Iowa.”

The battle for Minnesota — and other upper midwestern states like Iowa, Wisconsin and Michigan that are close — may ultimately boil down to suburban women on the margins: Voters like Anne Swenson who are unhappy with Trump but also reluctant to vote for Biden.

“Donald Trump probably can’t win those suburban women over, but can he give them reasons why they shouldn’t vote for Joe Biden,” said David Schultz, a political science professor and longtime expert on Minnesota politics at Hamline University in St. Paul.

“If he can keep them from turning out to vote — and let’s say, get his base to turnout at an even higher percentage than they did four years ago — that’s the recipe for a victory here,” Schultz said.

Swenson told ABC News that she is “not excited about” Trump’s deficit spending and explosion of federal debt.

“The other is the rhetoric and civility,” she said. “When did being civil to people become a sign of weakness?”

“I don’t know necessarily that Joe Biden would last four years, and if he doesn’t make four years, then she’s in automatically,” she said.

Meanwhile, Democrats are confronting lagging enthusiasm for Biden with an appeal to conscience and common sense.

“To be honest, I think a lot of people are going to do a little: hold their nose and vote,” said Dang.