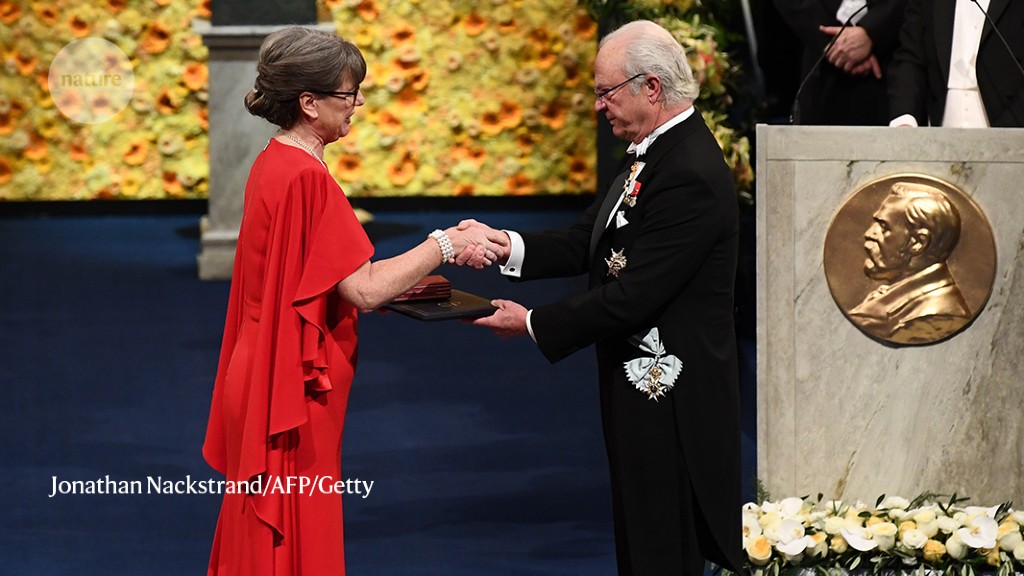 The study1, presented on 25 May at the European Geoscience Union (EGU) general assembly in Vienna, reviewed almost 9,000 recipients across roughly 350 awards in the fields of Earth and environmental sciences and cardiology, as well as those given out by national scientific bodies in the United Kingdom and United States. The study has yet to be published.

It found that women have received only around 15% of these awards, going back to the eighteenth century. For the 214 awards that are named after men, female winners fall to just 12% (see ‘Award winners by gender’). But women were the winners 24% of the time for the 93 awards not named after anyone — a trend that was consistent over time, says Stefan Krause, an Earth and environmental scientist at the University of Birmingham, UK, who presented the research at the EGU meeting.

The results suggest that there might be a link between the name of an award and who receives it, he says. “If the awards are not named after a person, the gender balance in prizes is more balanced,” he adds.

The study also found that women received 32% of the 12 awards named after both a man and a woman, and 47% of the 26 prizes named after a woman. But Krause cautions that there are few awards in these categories and the prizes tend to be newer, so those data cannot be used to make generalizations. The data also show that women tend to win a greater proportion of awards that honour services to science, such as mentoring or promoting diversity, than of those focused on scientific findings.

Krause carried out the study with his partner Katja Gehmlich, a research cardiologist also at the University of Birmingham, mostly during the UK COVID-19 pandemic lockdowns in 2020 and 2021. They trawled through publicly available records in their respective disciplines, assigning gender to winners, where possible using pronouns listed by the individual or the awarding organization.

Krause says the study’s results suggest that societies should consider how awards are named, given the importance of such prizes in raising a researchers’ profile, as well as in tenure and promotion decisions. A 2021 study2 found that women’s share of major research prizes is increasing but the proportion still lags behind their share of professorial positions. Various fields are grappling with the problem in different ways.

Some researchers have suggested mechanisms for the possible connection between prizewinners and award names. Unconscious bias could influence award-committee members to select winners who resemble the role model the prize is named after, says Johanna Stadmark, a geologist at Lund University in Sweden, who watched the EGU presentation virtually. “If there is an unconscious bias at play, either among nominators or the jury, women are likely to be disadvantaged when most awards are named after men,” she says. “This is very important and useful data to have. Only with data we can make a case and start a change.”

Curt Rice, president of the Norwegian University of Life Sciences in Oslo and an advocate for gender equality in academia, says that prize names could somehow prime committees to think of men if an award is named after a man — although he is not yet convinced that there is a causal link. It would be important to examine nomination procedures and award-committee compositions before drawing any firm conclusions, he adds.

A lack of demographic data on awardees was an issue, says Krause. Data on their race or ethnicity were rarely available, and for some prizes the pair assigned a winner as male or female on the basis of just their name, which Krause admits is flawed and neglects non-binary genders. For this reason, he and Gehmlich plan to confirm their data with the awarding bodies, he adds. Although societies have increasingly examined the gender gaps in their prizes, data on ethnicity remain a relative blind spot. Among the 9,000 award recipients in their study, he and Gehmlich could confirm that only one recipient was a woman of colour, Krause told the EGU meeting.

Societies should publish anonymized data on gender, including non-binary genders, along with the race and ethnicity of winners and nominees, says Pallavi Anand, an Earth and environmental scientist at the Open University in Milton Keynes, UK, who watched the presentation. They should be more open about their awards processes and rethink naming awards after people altogether, she adds.

Fixing an imbalance in prizewinners should be much easier than addressing other long-term issues, such as gender balance among full professors, adds Rice. “Prizes are an excellent way to get role models in the limelight, which in turn could change the gender balance of the field,” he says.