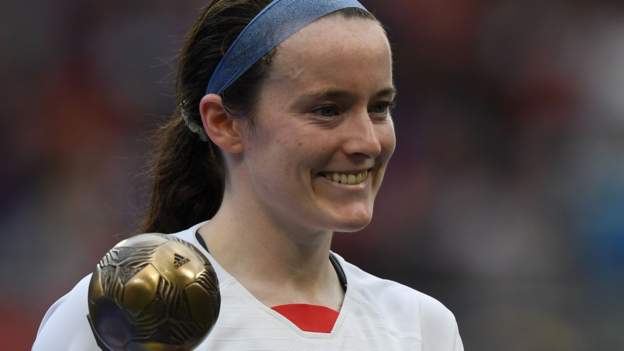 Whoever goes through will face Everton at Wembley on 1 November after the Toffees beat Birmingham City 3-0.

United States midfielder Lavelle has yet to play for Man City since arriving in August with a minor ankle injury.

But manager Gareth Taylor hopes to give a debut “over the next couple of games” to the 25-year-old World Cup winner.

“Rose has been training hard,” said Taylor. “What we’re trying to do with her is just make sure she’s ready.

“She’s been really keen to get back in. It’s just been a case of keeping the reins on her slightly, just before we let her go and do her thing.

“[We were] making sure that she had the adequate strength required in her leg before we started to push her through some real vigorous training.”

Arsenal, who were 4-0 winners over neighbours Tottenham in the quarter-finals on Saturday before Man City beat Leicester 2-1 on Sunday, are bidding to win their fourth game in a row.

The Gunners have scored 19 times in three games since resuming play in September after the summer hiatus.

“We’re in every tournament to win it,” said manager Joe Montemurro. “The scheduling is a little bit tricky but it is what it is and we need to make sure we’re prepared for it.

“We beat them [City] twice last year and unfortunately lost at the Academy ground but they are a very good team.

“They have recruited very well and it will be a really good indication for us of where we’re at.”

You can watch Thursday’s match live on BBC Two, BBC iPlayer and online, with coverage starting at 19:00 BST.