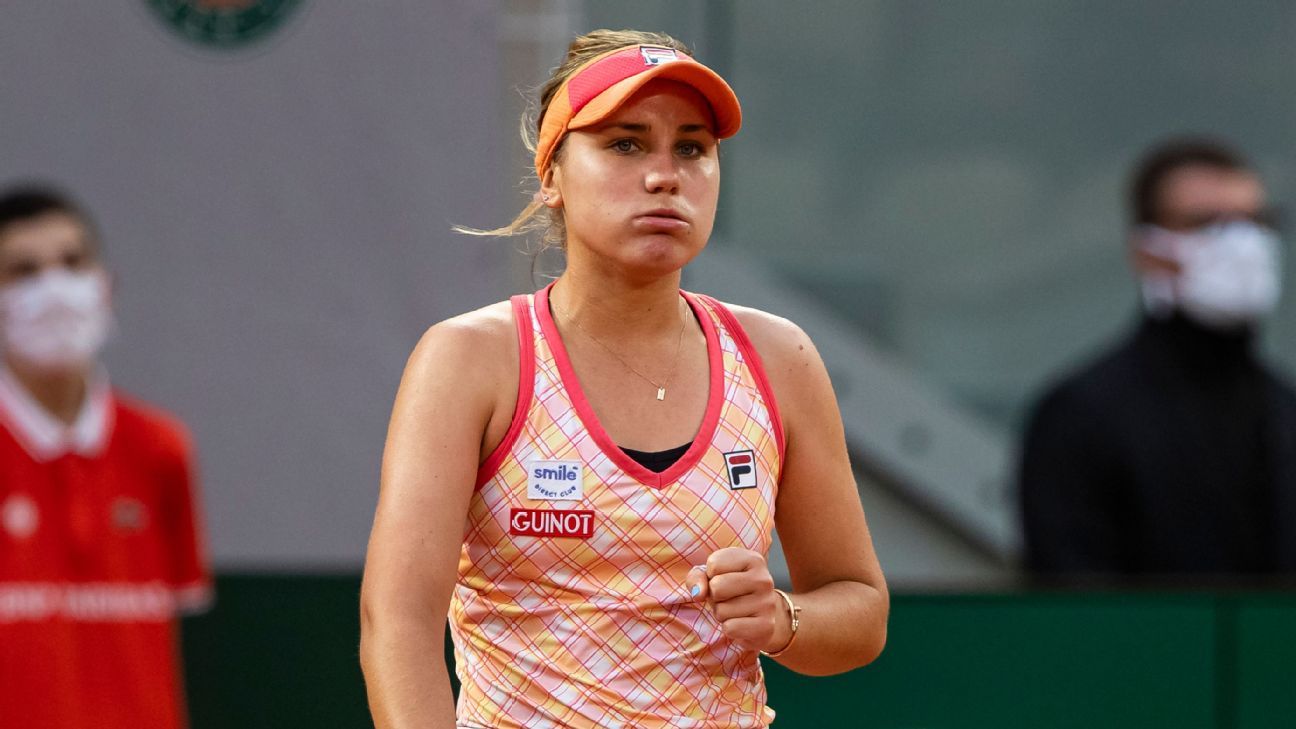 Having won the Australian Open in February, Kenin now has a chance to win her second Grand Slam and rise to No. 3 in the rankings. She hopes to become the first woman since Angelique Kerber in 2016 to hoist two major trophies in the same year and just the third American woman ever to reach her first two Slam finals during the same season. Both feats are even more impressive given there were only three opportunities to do so in 2020, as Wimbledon was canceled. Kenin will face 19-year-old Iga Swiatek on Saturday in the women’s championship match.

She made it clear to expect the same tenacity and fiery on-court demeanor she is known for in the final.

“Losing I really hate, and I love winning,” she said Thursday. “I try to do everything I can to win.”

That win-at-all-costs mentality has been visible throughout the fortnight. She has yelled and screamed — pumping herself up with “Come on!” refrains — and tossed her racket. She has received multiple fines and warnings for receiving help from her coach (her father), Alex. He, too, has shown his willingness to help however possible — even awkwardly changing seats during her fourth-round match to sit directly next to her opponent’s coach in an apparent intimidation tactic. Having to play deciders in all but two matches, Kenin has needed whatever extra edge she could find en route to the final.

To say 2020 has been a breakthrough season for Kenin would be an understatement. She started the year having never advanced past the fourth round at a major. She then steamrolled her way through the draw in Melbourne — including a win over home favorite and world No. 1 Ashleigh Barty in the semifinals and two-time major champion Garbine Muguruza in the final. She became the youngest American to win a Grand Slam singles title since Serena Williams in 1999, and surpassed Williams as the highest-ranking countrywoman with the victory at No. 7. She notched her second title of the year in Lyon, France, on March 8, just hours before Indian Wells was canceled. She rose to a career-high No. 4 in the rankings the next day but was unable to play for months as the season was suspended indefinitely due to the coronavirus pandemic.

Like many of her peers, Kenin struggled with the abrupt halt of her globetrotting schedule and the uncertainty about when competition would resume. She was disappointed to not have the chance to enjoy all of the perks that come with winning a major title and playing the best tennis of her career. She returned to her home in Florida and initially found it difficult to find the will to keep training since she had no idea when she would play again.

Her father wouldn’t let her lose sight of her goals and what she wanted to achieve. He wanted her to be ready for whenever competition would resume.

“I’m always with my dad, and he’s my coach, and he just kept telling me, ‘You have to keep motivated, try to keep motivated,'” she told ESPN.com in July. “He really helped me through that. When I found out about [an exhibition tournament at] Charleston, I got really excited and motivated. I just wanted to compete again.”

She played in the team event in Charleston, South Carolina, in June, then signed on for her first season of World TeamTennis, held in a bubble in West Virginia for three weeks in July. If there was an opportunity to play a competitive match — no matter when or where — she was going to take it. And she kept the possibility of playing at both the US Open and the French Open front-and-center in her thoughts at all times — using the two majors as inspiration during every tough practice.

“I am setting in my mind that they both are going to happen,” she said in the interview over the summer. “I know they might not but I can’t think like that. I have to have goals.”

Despite her lofty expectations, Kenin lacked her signature intensity in the “double in the bubble” events in New York when the season resumed. She lost her opener to Alize Cornet in straight sets at the Western & Southern Open, and then in the fourth round to Elise Mertens at the US Open. Her start to the clay-court season was even worse — she was double bageled by Victoria Azarenka in the first round in Rome.

After what she called the “disaster” of a match at the Italian Open, she was able to arrive in Paris earlier than anticipated and worked to acclimate to the autumn conditions and the Roland Garros courts as best she could. The strategy worked.

“It took some time for me to get my motivation back,” she said Thursday after her semifinal victory. “I finally got it. I feel like I’m playing the best tennis right now, as well.

“I was playing really well in Australia. Now I feel like I’m playing as good or even better.”

Kenin enters the French Open women’s final in the unusual position as the older and more experienced player, and the pressure that comes with it. She and Swiatek have never played against one another at the WTA level, but they are familiar with one another’s games — Swiatek beat Kenin in the third round of the juniors tournament at Roland Garros in 2016.

Currently ranked No. 54 in the world, Swiatek has been playing the best tennis of her career at Roland Garros, and knocked off No. 1 seed and 2018 champion Simona Halep 6-2, 6-1 in the fourth round in just over an hour. No one has taken more than five combined games against her throughout her dominant run in Paris. Kenin, who was seen briefly sitting with her father at Court Philippe Chatrier watching Swiatek warm up on Thursday, hasn’t forgotten their previous meeting.

“I remember I lost,” Kenin said. “I don’t remember how I played, but definitely I can say I was not as comfortable on clay as I am now, as I started to feel last year.

“I have to figure out what she does. She’s had a great two weeks here, she’s had some great results, playing some really good tennis. I know that I’m also playing well. I’m just going to enjoy myself today, and then tomorrow I’m going to prepare for Saturday.”

If Kenin isn’t fazed, it’s because she has been primed for this moment. Having first picked up a racket at 5 years old shortly after the family moved from Russia to the United States, she showed immediate promise in the sport. She has logged hundreds of thousands of miles and played countless matches since those early days, but her words in a video interview from when she was 7 are perhaps even truer today.

Saturday, she has a chance to get one step closer to her childhood goal and one thing is for certain: She will do whatever it takes to achieve it.