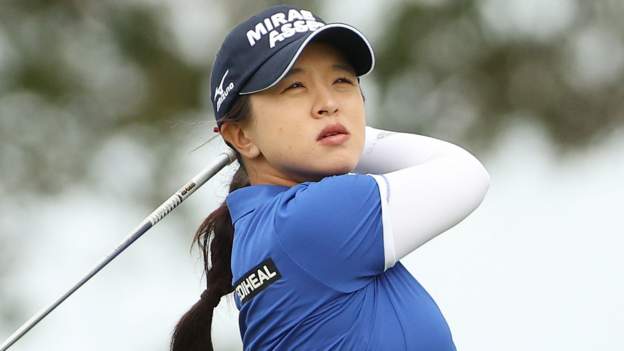 South Korea’s Kim Sei-young will take a two-stroke advantage into the final round of the penultimate major of 2020, the Women’s PGA Championship.

The 27-year-old world number seven, yet to win a major title, began the day one ahead and had six birdies in her three-under 67 to reach seven under par.

Charley Hull is the leading British player, tied 11th, seven shots adrift at level par after a round of 69.

Kim, second at this event in 2015 and runner-up in the 2018 Evian Championship, claimed the most recent of 10 LPGA victories in last year’s Tour Championship.

She might have had a three-shot lead going into Sunday’s final round at Aronimink Golf Club in Pennsylvania, only for her six-foot par putt to lip out of the cup at the 18th.

Nordqvist ran off three consecutive birdies from the sixth hole but also finished with a bogey after her approach bounced over the 18th green.

Canada’s Henderson, whose lone major win came at the 2016 Women’s PGA, reeled off five birdies in an 11-hole span from the second in a bogey-free round and returned a 65.

Reigning Olympic champion Inbee Park, a seven-time major winner and three-time Women’s PGA champion, is only three off the lead after a 66.

Hull had four birdies in her round and is one ahead of compatriot Jodi Ewart Shadoff, who dropped three shots in her final four holes, while Georgia Hall slipped to eight over after a second successive 74.