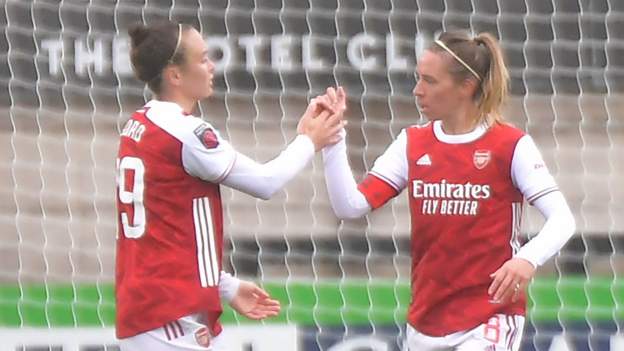 Thereafter Arsenal struggled to find their usual fluency, confronted at times by nine Bristol City players behind the ball, however, the visitors failed to pick up Nobbs’ run as Foord sent the ball over from the left and the England midfielder made no mistake.

The roles were reversed as Foord stretched to put them in front from Nobbs’ cross, but Arsenal found Baggaley in inspired form as they sought to further extend the lead.

She denied Foord a second at the near post and then dived to push away a magnificent Nobbs volley, before further excellent saves from Katie McCabe and Miedema.

City had the chance to equalise when sub Ebony Salmon was played in one-on-one by Carla Humphrey but Zinsberger used her legs to keep out a right-footed shot.

And Miedema settled any remaining Arsenal nerves as she used the outside of her foot to direct the ball beyond Baggaley after running onto Beth Mead’s pass.