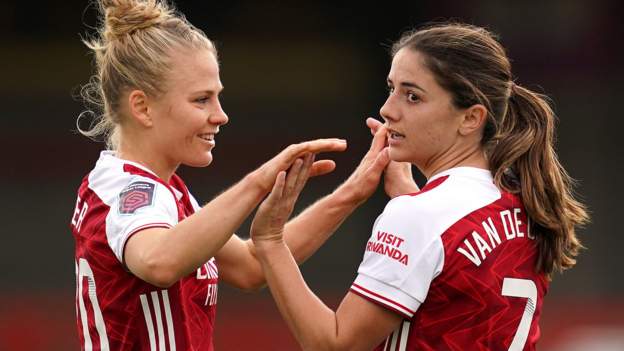 Denise O’Sullivan fired narrowly wide from inside the penalty area and Inessa Kaagman also forced a smart save from Manuela Zinsberger.

But once Netherlands striker Miedema found the bottom corner from 20 yards out for the first goal, Arsenal were unstoppable.

Beth Mead had an effort tipped onto the base of the post by Brighton goalkeeper Megan Walsh before Miedema was also denied a second when Walsh raced off her line to block a one-on-one chance with her legs.

Eventually, Van de Donk doubled the lead towards half-time from Caitlin Foord’s pull back from the byeline.

After the break, the goals continued to come and Scotland defender Beattie headed in Katie McCabe’s corner at the back post.

The fourth was arguably Arsenal’s best goal as Miedema went on a surging run down the left wing before producing a brilliant ball across goal for Wubben-Moy to race on to and stab into an empty net from close range.

There was just enough time left for Miedema to make it 5-0 in injury time as she swept home a half-volley from McCabe’s cross.