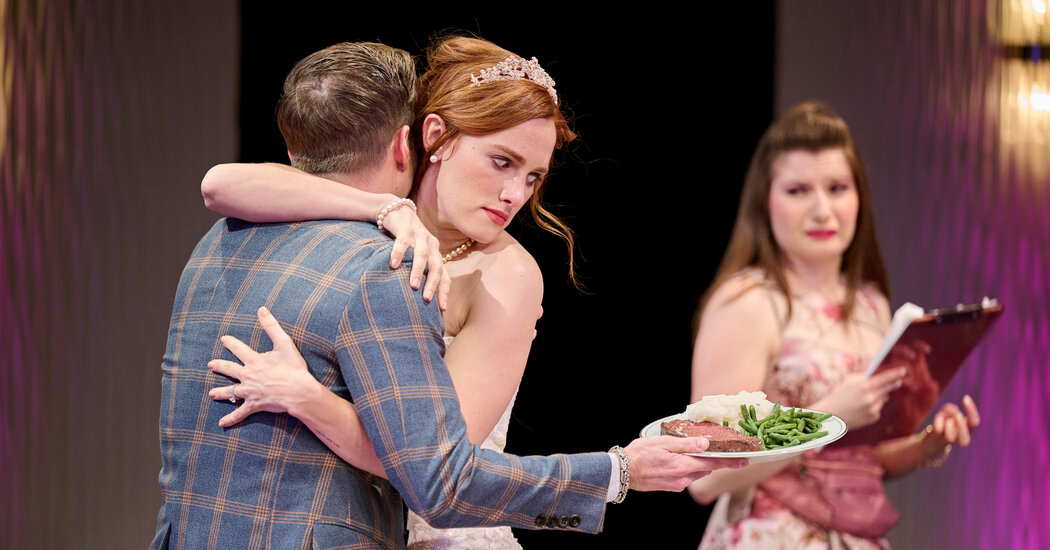 There isn’t enough food, the D.J. is playing Styx instead of Beyoncé, and a line for the cash bar looks like a humanitarian crisis. The bride’s big day in “Zoey’s Perfect Wedding,” streaming via TheaterWorks Hartford, is predictably a total disaster. (Would we have been invited otherwise?)

If rubbernecking the collision of happily ever after with dire disappointment is your kink, buckle up. Though this ill-fated party is likely to be familiar.

It’s 2008, Barack Obama has just been elected president, the economy is in the toilet, and Zoey’s college friends have been banished to a far-flung table in a drab ballroom at the Downtown Brooklyn Marriott. Zoey, played by Rachel B. Joyce, is the last of their school chums to get hitched, and this is not how they thought she’d go out. For affluent and educated 30-something New Yorkers, a favored set of the playwright Matthew López, a chain-hotel reception is as tacky as it gets.

Not only was Rachel (Blair Lewin) not asked to be a bridesmaid, but staving off a calamity like this one is her job — really. (She’s an in-demand wedding planner.) Sammy (Hunter Ryan Herdlicka), a sports agent impeccably dressed in a three-piece plaid suit, swipes a bottle of liquor from the bar to soothe his offended senses. (“Hey, cutie! Got any Cuervo?” he coos to an unseen male server.) And Rachel’s husband, Charlie (Daniel José Molina), is agog to hear how much more sex Sammy is having than they do (unlike the tequila that flows like water, the couple is on the rocks).

Every cliché about bad weddings probably occurs during the first hour of Zoey’s. A cringe-inducing speech from a drunk guest oversharing her personal problems? Check. (Rachel really ought to know better.) A bride who shrieks and sobs and retreats to the bathroom? (Don’t forget that bottle of Cuervo.) Not until it seems as if nothing more could go wrong does the play push deeper into its exploration of relationships, which does not exactly reveal new territory: friendships wane, marriages fall apart, and romance rarely resembles a fairy tale.

Unlike his two-part “The Inheritance,” an ambitious epic for which López won a Tony Award in 2021 for best play, “Zoey’s Perfect Wedding” is ready-made and on the nose, like a trifle you might pluck off the dessert table at a function less calamitous than this one. The 90-minute comedy, which premiered in Denver in 2018, predates the playwright’s saga about late-20th century gay Manhattanites, and demonstrates his sustained interest in the dynamics of connection amid the limitations of convention.

The production, directed by Rob Ruggiero, is playful and polished. A dizzying-print carpet and bland sconces on textured walls are a suitable assault on the eyes (set and lighting design are by Brian Sidney Bembridge). And performances from the ensemble are uniformly strong, committed to the sitcom setup and believably tender as the details of their characters are more fully revealed.

“Zoey’s Perfect Wedding” treats the early aughts with a certain nostalgia, a Myspace, post-George W. Bush era of social optimism when Gen X was easing into adulthood — and recognizing the potential disappointments of marriage and material achievement. The retro quality of the play’s perspective can feel almost mournful, rather than enriched with the benefit of hindsight. Letting go of youthful ideals can leave you with one hell of a hangover.